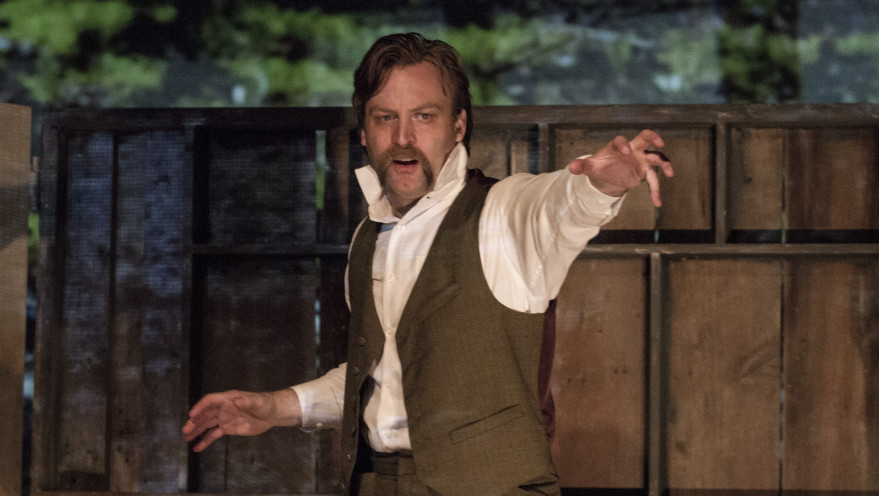 Truth is Stranger Than Drama at Blyth

We must never take words for granted.
There’s no such thing as happy endings; something always comes after.
— Peg Dunlop

BLYTH — The last two of four world premieres at the Blyth Festival have sent me barrelling down memory lane in a literary roadster. If Truth Be Told and The Last Donnelly Standing take me back to when I was introduced to Canadian arts and culture more than four decades ago.

I attended Trent University from 1972 through 1976 and graduate school at the University of New Brunswick in 1976-77. As both an undergraduate and graduate student, I concentrated on Canadian literature which was at the vanguard of a Renaissance in Canadian arts encompassing fiction, poetry and theatre, music, dance and the visual arts. Canadian culture came of age in the 1970s. It was thrilling to witness a glorious cultural explosion the likes of which the country had not seen before or has seen since.

The Blyth Festival played a vital role in that cultural explosion, having been founded in 1975 by director James Roy, playwright Anne Chislett and local newspaper publisher Keith Roulston with the aim of developing and producing local Canadian plays. The festival was inspired by The Farm Show, a landmark theatre production guided and directed by Paul Thompson in 1972 and first presented on a farm outside Clinton. The cast included a young Miles Potter.

Both Thompson and Potter are back this season — Potter to direct If Truth Be Told and Thompson to co-write and direct festival artistic director Gil Garratt in the one-man tour de force The Last Donnelly Standing. My partner Lois and I enjoyed the pleasure of seeing both outstanding productions during a single day of invigorating theatre.

Margaret Laurence was living in nearby Lakefield when I was studying in Peterborough. I had read all her seven novels including her 1974 opus The Diviners. I was also reading the short fiction of Alice Munro, including Lives of Girls and Women, her collection of interconnected stories published as a novel in 1971. Munro, who was born in Wingham and lived much of her life in the area, maintained strong ties to the festival which has staged multiple adaptations of her stories.

In the 1970s Laurence was one of Canada’s most celebrated novelists — she fondly referred to Canadian writers as her ‘tribe.’ Meanwhile, Munro was starting to receive the acclaim that would make her an international literary star which included receiving the Nobel Prize in 2013. Both writers became inextricably linked in 1978 for reasons that reflect poorly on areas of Ontario in which they had lived.

A group of puritanical cultural vigilantes known as Renaissance Canada — talk about irony — convinced the Huron County school board to place three books on its banned list and subsequently voted to forbid students at one of its five high schools from reading Laurence’s Governor General’s Award-winning novel, which at the time was one of the country’s most influential books. In the same shameful year Munro’s Lives of Girls and Women, which had won the Canadian Bookseller’s Award, was removed from the Peterborough high school curriculum. 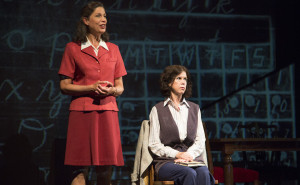 These two ‘censorship’ campaigns inspired playwright Beverly Cooper to write If Truth Be Told. The central character, novelist Peg Dunlop, is a composite consisting of some impressionistic aspects of both Munro and Lawrence, preventing the character from being confused with a biopic of Munro.

Cooper is no stranger to ignominy. The author of Eyes of Heaven and The Lonely Diner: Al Capone in Euphemia Township among other plays, sent shock waves across Huron Country when the festival presented Innocence Lost: A Play About Stephen Truscott in 2008 and 2009. Commissioned by the festival and directed by Potter, it was a finalist for a Governor General’s Award in 2009.

Cooper’s latest play puts Huron Country under the dramatic microscope once again as a means of telling all of us something about our essential selves — irrespective of where we live.

The story centres on Peg (a nod to Peggy Atwood?), an acclaimed writer with an enviable list of prestigious awards to her credit. She has returned home from Vancouver to attend to her ailing mother. Her marriage is on the rocks and her two grown daughters have flown the nest.

Peg is the most famous writer ever to come from the small southwestern Ontario town of Wayford (a nod to Roberston Davies’ Deptford?). But far from being celebrated in her hometown, the locals despise her work, believing they provide unsavoury creative fodder for the writer.

When Peg returns home (which echoes Munro’s relocation to Clinton from Victoria), few in the town embrace her with the exception of an energetic high school teacher from Guatemala who assigns one of Peg’s books to her Grade 13 class.

The literary poop hits the fan when details of Peg’s book emerge, causing a group of ‘concerned’ parents — led by a local church elder who happens to be a school board trustee — to embark on a crusade to have the book banned. As the townsfolk take sides, Peg befriends Jennifer, an adolescent girl struggling to come to terms with the death of her infant brother some years previously.

Like Innocence Lost, If Truth Be Told dramatizes tensions that tear a community apart by pitting family member against family member, neighbour against neighbour. Cooper, however, isn’t interested in judging the actions of people under pressure. She reserves judgement by presenting not only both sides of an issue, but the spaces in between and around. Not content with black and white, she writes in fifty shades of grey. In the process, she transforms moral ideas — the dialectic between censorship and freedom of expression — into a drama about people and community in crisis.

If Truth Be Told is surprisingly powerful because it balances perfectly the public intellectual issue of banning books with such personal emotional issues as caring for a son or daughter or caring for a parent. It shoots an arrow from the mind straight into the heart.

Masterfully directed by Potter, the production features flawless ensemble acting anchored by Catherine Fitch (who has never been better at Blyth) as Peg, along with J.D. Nicholsen as Harry Briggs, the passive/aggressive elder/trustee. Rebecca Auerbach is Peg’s housekeeper Maysie, Meghan Chalmers is Maysie’s troubled daughter Jennifer and Anita La Selva is the firebrand teacher Carmella.

History and topical news provided a fertile seedbed for emerging Canadian theatre in the 1970s. No historical event offered richer soil than the vigilante massacre of the Donnellys — an Irish immigrant family that settled on the Roman Line outside Lucan — on 4 February 1880. Various playwrights wrote about the infamous mob murder including James Reaney who penned his award-winning trilogy consisting of Sticks & Stones, St. Nicholas Hotel and Handcuffs.

Seeing the world premiere of Keith Turnball’s production of Sticks & Stones at the Tarragon Theatre with my university pal James Stewart Reaney (son of the poet/playwright) was an eye-opener. Up to that point my knowledge of the family was limited to Thomas P. Kelley’s pulp fiction potboiler Vengeance of the Black Donnellys and Orlo Miller’s historical account The Donnellys Must Die. The late Jerry Franken, who maintained a lengthy artistic association with Blyth, was a cast member of the premiere Donnelly productions.

It wouldn’t be an exaggeration to suggest Thompson has been obsessed with Lucan’s notorious family throughout his professional life. In addition to The Outdoor Donnellys, his Donnelly credits include Them Donnellys, The Death of the Donnellys and Urban Donnellys. The Last Donnelly Standing is his seventh examination of the family that transmogrified into legend and story, myth and drama.

(I had the opportunity of talking to Thompson about the Donnellys and other theatre matters in a public interview I conducted on campus when I was writer-in-residence at the University of Waterloo in 2002-03. Johns joined us for a delightful dinner afterwards.) 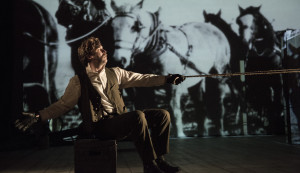 The first of Blyth’s eight assorted artistic directors to combine playwriting and directing with acting, Garratt has returned to the boards as Robert Donnelly, one of three brothers who escaped being murdered on that infamous February night in 1880. Although Robert wasn’t, in fact, the last Donnelly — that distinction was held by Patrick — he remained the most forcefully defiant until the end.

Garratt penetrates the mind, heart and soul of Robert to give us a cinematic portrait of a passionate, intelligent, tormented, menacing, funny, driven, haunted man. He delivers a high-octane, compelling performance assuming multiple roles (including brothers Patrick and Billy, wife Annie and vigilante leader James Connolly, among others). After riding on a horse to Blyth Memorial Hall, he takes to the stage — delivering lines, improvising with the audience, reciting the poetry of Lord Byron and William Blake and singing fireside ditties and ballads while plucking away on guitar, banjo and fiddle as well as button accordion and bodhran. In a nutshell, he’s magnificent.

Special nod to the production teams: Both productions benefit mightily from the contribution of projection designer Beth Kates (she co-created and designed the set, lighting and costumes for The Last Donnelly Standing). Ditto for Lyon Smith’s excellent sound design. Set and lighting director Steve Lucas and costume designer Shawn Kerwin deserve accolades for If Truth Be Told.

The 2016 season will be written in the annals of the Blyth Festival as an unequivocal artistic triumph. Congratulations to everyone responsible for the festival’s success!