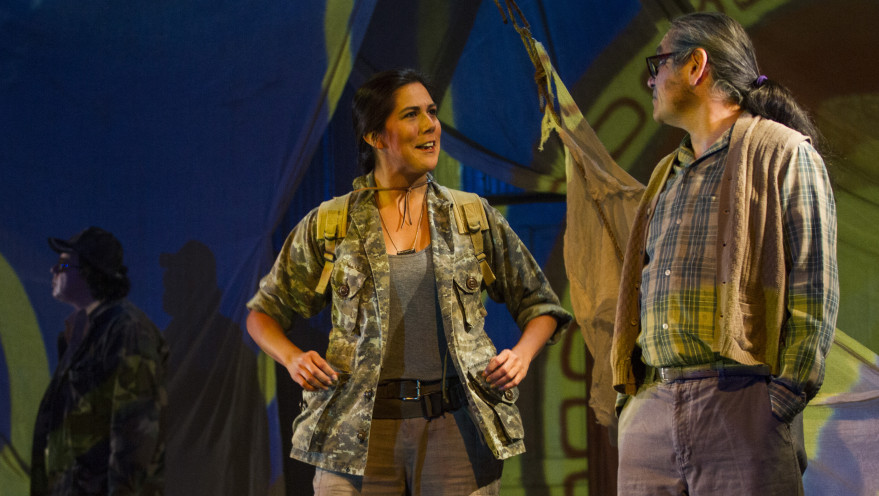 When I was growing up in London, Ontario during the 1950s and ’60s, Ipperwash was an Ontario Provincial Park where I went camping every summer with my best friend and his parents. It was adjacent to Camp Ipperwash, where the Canadian army trained cadets. My parents built a winterized cottage at Ipperwash in the ’70s.

The violent confrontation, which took place in the fall of 1995, culminated in the death of Dudley George, a band member of nearby Kettle Point First Nations.

Indigenous protesters were occupying the army camp in order to assert their rightful claim to land that had been expropriated by the Canadian government in 1942 through the auspices of the War Measures Act. The government had reneged on its promise to return the land to the Stoney Point Band after the Second World War.

An OPP officer killed George, who was unarmed and carrying a flashlight at the time. Yes, a flashlight! The fatal shooting occurred a day after our vindictive, bully boy premiere allegedly informed provincial police: ‘I want the fucking Indians (italics mine) out of the park,’ according to a former attorney general as reported in the Globe and Mail.

That, in a nutshell, is the history and politics behind what became known as the Ipperwash Crisis.

However, it’s not Ipperwash, the play co-written by Falen Johnson and Jessica Carmichael that continues at the Blyth Festival through Sept. 16. The play is one of two late-season productions that transform news headlines into compelling drama by provoking thoughts as they evoke emotions.

I went to Blyth expecting something of a dramatic rehash of the Ipperwash Crisis. I expected justifiable finger-pointing, justifiable blame, justifiable rage. I was ready to jump on the bandwagon of First Nations’ complaint and resistance as a precondition of long overdue reconciliation.

Instead, I found a poignant poetic play of home and ancestors, of memory and mythology, of dream and vision told through song, drumming and dance as well as through story. There was rage; but there was a more powerful sadness penetrating deeper than anger could reach.

Ably directed by Carmichael, with set by Clayton Windatt and costumes by Jeff Chief, the production elements support the play’s poetry as much as linear narrative. The fictional story involves an Afghanistan veteran from the New Credit First Nation who is sent to Camp Ipperwash to conduct a decontamination cleanup. She rents a farmhouse from a Second World War veteran whose family was relocated by the government at the same time he was serving his country in Europe.

The First Nations cast doesn’t represent actual people associated with the Ipperwash Crisis, but rather embody and reflect characters through which the darkness of the Crisis’ backstory is brought to lyrical light. The ensemble includes Nyla Carpenier, Jonathan Fisher, Nicole Joy-Fraser and James Dallas Smith, all of whom appeared in Drew Hayden Taylor’s The Berlin Blues.

Ipperwash is about the sorrow that accompanies displacement, dispossession and disinheritance, balanced by the joy that accompanies resilience, recovery and reclamation. A story as old as humanity itself, its relevance is direct and immediate to the indigenous peoples who settled North America long before European colonizers set sail for the New World.

The production unfolds over 70 minutes without intermission. Playgoers will not spend a more significant hour in the theatre this summer.

Hats off to the Blyth Festival for presenting The Berlin Blues and Ipperwash on the occasion of the 150th anniversary of Confederation — a year in which reconciliation with First Nations peoples has finally entered the country’s collective conscience.