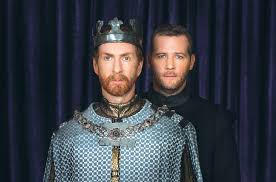 Breathing Life into a Trio of Dramatic Kings

Four lagging winters and four wanton springs end in a word: such is the breath of kings
— Richard II

STRATFORD — Graham Abbey is a true child of Stratford. Not only has he been a member of the festival company over 18 seasons, he’s Stratford-bred. This season he adds the credentials of dramatic adapter and associate director to his diverse acting credits.

My partner Lois and I caught the pair of dramatic abridgements on the same day at the Tom Patterson Theatre, where they continue in tandem through September 24. It made for an exhilarating — and exhausting — six hours of theatre straddling a matinee and evening.

In addition to adapting the cycle of history plays, known as the Henriad, Abbey plays Bolingbroke/Henry V. The production is co-directed by Weyni Mengesha and Mitchell Cushman, son of longtime National Post theatre critic Robert Cushman. Meanwhile, Abbey is listed as associate director.

The theatrical distillation unfolds like a made-for-TV action movie. The culturally inclusive, gender-bending cast of 20 assumes more than 70 roles, with female actors oftentimes playing male characters. The pace and multiple-role casting keep audience members on their toes. Snooze and you lose.

Such an ambitious project would have been seriously compromised without a solid foundation of actors. In addition to Abbey, we have Tom Rooney primarily as Richard II and Geraint Wyn Davies primarily as Falstaff. Araya Mengesha (Weyni’s cousin) is Prince Hal/Henry V, while Jonathan Sousa is Hotspur. In addition, a fine design team makes the most of a newly configured theatre-in-the-round at the Tom Patterson.

Abbey starts off slowly as Bolingbroke but comes into his own as Henry IV, especially as the usurping monarch ages, becomes infirm and struggles increasingly with doubt and guilt.

Rooney is utterly captivating as the impetuously mercurial Richard in the first half of Rebellion. He delivers a beautifully modulated, self-contained, multi-layered, bravura performance. We hang on his every word until his murdered body is rolled out of a funeral shroud in dramatic fashion. I would love to see Rooney play the title role in the play as written by The Bard. Rooney reappears as a charming Justice Shallow in the first half of Redemption.

The late, great Douglas Campbell was Stratford’s go-to Falstaff for more than four decades. One of Shakespeare’s greatest roles has now fallen on Wyn Davies who proves an adept successor. Wyn Davies brings the second half of Rebellion to life. Conversely the wind is taken out of the first half of Redemption when ’the sweet creature of bombast’ is brutally dismissed. Wyn Davies is also excellent as Fluellen, the juiciest of Shakespeare’s Welsh characters, in the last half of Redemption.

Sousa is a fierce ball of energy as Hotspur.

Abbey has given satisfying dramatic shape to his history-on-the-run marathon. Rebellion is buoyed by sustained energy. Redemption, however, exhibits signs of fatigue, which might not be surprising given the sheer ambition of the project.

I seem to hold a minority opinion among reviewers, but I was not terribly impressed with Mengesha, especially after Hal transforms into Henry V. I think this is one reason Redemption loses velocity and dips.

The other reason Redemption tails off might have to do with intrinsic structure. Rebellion unfolds like a late string quartet that has been pared down from a grand symphony. It’s personal and intimate, concentrated and focused. In contrast, the second half of Redemption (which is a truncated Henry V) plays out on a bigger stage. The larger scale lacks energy.

Anahita Dehbonehie’s set design is interesting. With minimal props, the stage begins as a field of wood chips or mulch for Rebellion. The mulch is swept away, revealing a geometrical jigsaw puzzle with removable pieces that resemble cannonball craters when Redemption ends with the Battle of Agincourt.

A tip to the wary: It goes without saying that it’s always worthwhile to familiarize yourself with the play before seeing a Shakespearean production. This is particularly true of Breath of Kings which in some instances plays loose and free with Shakespeare’s texts. A little prep homework will pay off handsomely.

Personal Note: I had the pleasure of working with one of Abbey’s cousins, Paul Maher, an entertainment copyeditor at the Waterloo Region Record, for a couple of decades.

(featured image as Tom Rooney as Richard II and Graham Abbey as Bolingbroke/Henry IV in Breath of Kings, courtesy of Stratford Festival)