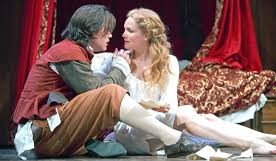 In Love with Shakespeare

I will have poetry in my life
— Shakespeare in Love

STRATFORD — Romeo and Juliet is not one of my favourite Shakespearean plays. But as I was taking in Shakespeare in Love on a recent evening, I found myself yearning for the tragedy about ‘the pair of star-cross’d lovers.’

It’s no surprise that the Bard gets all the good lines in this slavish stage adaptation of John Madden’s 1998 Oscar-winning movie starring a fetchingly young Gwyneth Paltrow. What should be a revelation to those who shun Shakespeare’s plays as if they were carriers of the Black Plague is how his words thrive and flourish 400 years after his death.

As one in a capacity audience at the Avon Theatre, another thought occurred to me. How many of the people who were enjoying this innocuous spoof of both Shakespeare and live theatre attend Shakespearean productions? After all, if you think the cross-dressing Viola de Lesseps is charming (played here delightfully by Shannon Taylor), you’d trip head over heels for the original Viola in Twelfth Night.

This thought struck me in an early scene when the nasty ‘moneyman’ Fennyman (played with sly relish by Tom McCamus) makes the distinction between art and entertainment. This perceived dichotomy between serious theatre and enjoyment lies at the heart of what oftentimes concerns me about the Stratford Festival’s programming.

The separation of art and entertainment leads to North America’s premium classical repertory company staging popular commercial works, whether Broadway musicals, Masterpiece Theatre-style stage adaptations or productions geared to families and children. This schizophrenic programming is evident this season with Macbeth, As You Like It, All My Sons, The Hypochondriac, John Gabriel Borkman and The  Aeneid sharing the playbill with A Chorus Line, A Little Night Music and The Lion, the Witch and the Wardrobe, not to mention Shakespeare in Love. Similarly, a Shakespearean history cycle (Richard II and Henry IV Part 1 and Part 2 and Henry V) is presented in a severely truncated two-part adaptation under the umbrella of Breath of Kings: Rebellion and Redemption.

The reason the festival presents popular commercial fare is based on the assumption that a full-course meal of Shakespeare with an array of classical side-dishes would not attract sufficient diners to pay the bills let alone turn a profit.

There’s no question this high-octane Shakespeare in Love, which continues though October 16, will put bums in seats. Moreover the North American premiere succeeds in no small part because of the quality of the festival’s acting company, all of whom squeeze every ounce of wit and charm out of Marc Norman and Tom Stoppard’s screenplay.

Luke Humphrey is a charismatic Will Shakespeare who wins hearts. Stephen Ouimette is a devilishly unapologetic scene-stealer as the much put-upon impresario Henslowe, Sara Orenstein is a regally pooch-loving Queen Elizabeth, Karen Robinson is a loud and rambunctious Nurse and Saamer Usmani is slyly suave Kit Marlowe (in an expanded role from the film)

Beyond the actors, however, it’s difficult to determine where the festival’s influence on Lee Hall’s stage adaptation begins and where the influence of Disney Theatre Productions ends, including the parachuted West End creative team of director Declan Donnellan, designer Nick Ormond, composer Paddy Cunneen and choreographer Jane Gibson. In short, the production veers precariously close to a hall rental.

Transporting the production from London’s West End to Stratford results in a generic package. It would have been interesting to see what a director on intimate terms with the festival might have done to put a more personal stamp on Shakespeare in Love.