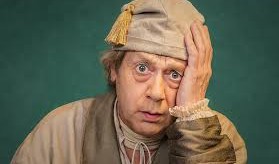 More Fun Than an Emollient Exemplum

With friends like this, who needs enemas?
— as spoken by Beralde, brother of the hypochondriac Argan

STRATFORD — This might come as a shock to those reared on Hollywood film and television, but the penis and pissing, not to mention the rectum and defecating, penetrated comedy long before Animal House and Family Guy.

These were common targets of low fun in the comedies of the 17th century. If you don’t believe me, check out the Stratford Festival’s production of Molière’s 1673 comédie-ballet The Hypochondriac, on view at the Festival Theatre through October 14. There’s enough ripe bathroom humour to make an adolescent boy blush with tittering delight.

Directed by festival artistic director Antoni Cimolino and featuring Stephen Ouimette, the closest thing to a comic genius in Canadian classical theatre at the moment, the production is both deliciously crass and extravagantly opulent. 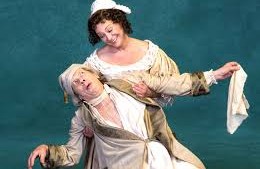 The festival has staged adaptations of The Hypochondriac three times before under the title of The Imaginary Invalid (translated from Le malade imaginaire). This offering is a modern-language, 2005 version by British playwright Richard Bean of a literal translation by Chris Campbell.

Jean-Baptiste Coquelin, otherwise known in the annals of world theatre as Molière, certainly had a hard-on for physicians. No fewer than six of his comedies give doctors the royal goose.

Drama historians suspect the playwright was himself a hypochondriac, so there are elements of autobiography here. Moreover, there’s ample cause for satirical scorn. The medical profession not only forsook him in his last years when he was stricken with illness, but abandoned Molière completely when he collapsed onstage during the fourth performance of The Hypochondriac — in the role of Argan — only to die shortly thereafter at home.

The medical profession is held in higher esteem today, so lampooning doctors doesn’t trigger the belly laughs it did four centuries ago. Nonetheless, there’s enough healthy skepticism surrounding naturopathic and homeopathic ‘alternative medicines’ to provide a springboard for farce and satire.

It can be argued that Molière wasn’t so much interested in skewering doctors as in heaping contempt on those intellectual forces in society that stubbornly hold on to accepted dogma rather than embrace new scientific data. Just think about history’s naysayers who dismiss such notions as a spherical-shaped planet rotating around the sun and the circulatory blood system of the human body, or the benefits of vaccine inoculations and the ecological threat of global climate change.

In this adaptation Ouimette doubles as Molière playing the role of Argan, a miserly, anally fixated manufacturer of carpet underlay who wallows in narcissistic self-absorption. When he isn’t obsessing over imaginary aches and pains he’s preoccupied with marrying off his fetching daughter Angélique (Shannon Taylor) to a doctor, thus gaining himself access to free medical advice at the drop of his drawers.

Unfortunately for Angélique, who has eyes only for Cléante (Luke Humphrey), a handsome apprentice in her father’s company, Argan is determined to hand over his daughter to a buffoonish physician-in-waiting by the aptly crass name of Thomas Diafoirerhoea (Ian Lake). When we first meet Thomas, he’s accompanied by his equally buffoonish physician father Monsieur Diafoirehoea (Peter Hutt) — confirming that medicine ‘runs in the family.’

To complicate matters Argan is married to Beline (Trish Lindstrom), an unfaithful golddigger intent on consigning her stepdaughter to a nunnery so she can inherit her husband’s fortune when he kicks the bedpan, as it were.

Argan’s tough-as-nails and smart-as-a-whip housekeeper Toinette (Brigit Wilson) sees through Beline’s avaricious scheming and conspires with Argan’s level-headed brother Beralde (Ben Carlson) to expose Beline and convince Argan he’s a model of good health — all of which comes tumbling down like a stack of doctor’s bills when Molière collapses on the Festival stage leaving Beralde to ask, ‘Is there a doctor in the house?’ as the curtain falls on the outrageously hilarious performance.

Ouimette is such a gifted comedic actor that it’s difficult not to read his performance as one of an ailing Molière playing the self-portrait character of Argan.

You can tell how much fun this talented ensemble is enjoying throwing caution to the wind. There’s not a weak link in this chain of delightfully gross humours.

All the fun is not lost on the cast. Cimolino enjoys himself by adding lavish flourishes from Italian commedia dell’arte and the French court of Louis XIV, aided and abetted by the period set, glorious costumes and opulent candy floss hairstyles of designer Teresa Przybylski. There’s much to please the eye and the ear (with Berthold Carrière’s charming score), as theatregoers hold their collective nose in response to the gross shenanigans that unfold on stage.

(Featured image of Stephen Ouimette as Argan in The Hypochondriac, courtesy of the Stratford Festival)