This book is not about heroes. English poetry is not yet fit to speak of them. Nor is it about deeds, or lands, nor anything about glory, honour, might, majesty, dominion or power, except War. Above all I am not concerned with Poetry. My subject is War, and the pity of War. The Poetry is in the pity. Yet these elegies are to this generation in no sense consolatory. They may be to the next. All a poet can do today is warn. That is why the true Poets must be truthful.

The words above comprise a draft of the preface to a collection of war poems Wilfred Owen intended to publish in 1919. Although the book was published eventually, the English poet did not live to see it. He was killed in action on 4 November 1918, which all who remember know was seven days before the end of the First World War—the so-called Great War to end all wars. And hasn’t.

Our country’s nationhood was forged in the smithy of  the First World War. The event grips the Canadian literary imagination like no other conflict, including the Second World War. And Timothy Findley’s The Wars is one of the best, if not the very best, work of fiction devoted to the industrial slaughter of 66,000 of the 650,000 Canadians who served. Another 172,000 were wounded; many more returned home broken in mind, body and soul. 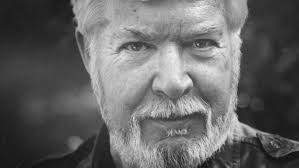 Published in 1977, The Wars is Findley’s finest literary achievement comprising a dozen novels, a couple each of story collections and memoirs, and a quartet of plays. Although it spans 1915 to 1922 and focuses on trench warfare in Europe at the turn of the last century, the novel’s title asserts that Findley intended to write an indictment of all wars for all time. To serve that end he depicted war as a madness, the insanity of which is verified by its violation of the world of Nature and all its beautiful creatures.

Like Owen before him, Findley did not seek to console with his novel. Instead, he sounded an urgent warning as truthfully as he was able with the abundant gifts he had. Sadly The Wars remains as relevant today as the day he put down his pen after writing the first draft in longhand.

What passing-bells for these who die as cattle?
— Only the monstrous anger of the guns.
Only the stuttering rifles’ rapid rattle
Can patter out their hasty orisons.
No mockeries now for them; no prayers nor bells;
Nor any voice of mourning save the choirs,—
The shrill, demented choirs of wailing shells;
And bugles calling for them from sad shires.

What candles may be held to speed them all?
Not in the hands of boys, but in their eyes
Shall shine the holy glimmers of goodbyes.
The pallor of girls’ brows shall be their pall;
Their flowers the tenderness of patient minds,
And each slow dusk a drawing-down of blinds.
—“Anthem for Doomed Youth” by Wilfred Owen

To celebrate the 100th anniversary of the 11 November 1918 Armistice, London’s Grand Theatre is presenting a theatrical adaptation of The Wars.

Grand artistic director Dennis Garnhum—who first brought the novel to the stage in a co-production by Theatre Calgary and Vancouver’s Playhouse Theatre Company  in 2007—worked with Findley initially in 2001 on The Trials of Ezra Pound for the Stratford Festival.

It’s clear Garnhum has deep respect for Findley, both the man and his work, as evidenced with this stirring and moving production. It’s equally clear he understands Findley’s artistic goal when he says in his program notes that: “. . . this adaptation. . . seems like an appropriate way to honour our Canadian soldiers—past, present and future—who live to defend our freedom.”

Garnhum reports that his initial fear of working with the award-winning writer at Stratford soon dissipated in response to Findley’s “kindness and generosity.” I interviewed Findley a number of times over a quarter century, often over a bottle of red wine, and I found him to be insightful, gracious and eloquent, as well as kind and generous. 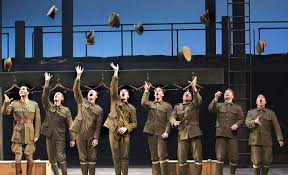 Grand Theatre production of The Wars

The Wars is Findley’s most elegantly sustained novel. We follow a young commissioned officer, Robert Ross, as he suffers–and is destroyed by–the unspeakable horrors of war. While not immune to sorrow and grief earlier in his life, Robert is the son in a privileged Canadian family who fights shoulder-to-shoulder with soldiers across all classes and backgrounds. The war places him in the arms of a beautiful English aristocrat—for a fleetingly brief period of sanctuary. He pays the ultimate price by attempting heroically to safeguard his moral honour in a world where morality and honour are in short supply.

It’s a harrowing journey through the threshold of Hell. And it is the image of hell on earth that we carry with us after bearing witness to Robert’s ordeal.

As one would expect, Garnhum carves and shapes an already concentrated novel in his adaptation. The result on stage is compelling and powerful.

The cast is rounded out with Jenni Burke as Ella and Katherine Gauthier as Marian.

Bent double, like old beggars under sacks,
Knock-kneed, coughing like hags, we cursed through sludge,
Till on the haunting flares we turned our backs,
And towards our distant rest began to trudge.
Men marched asleep. Many had lost their boots,
But limped on, blood-shod. All went lame; all blind;
Drunk with fatigue; deaf even to the hoots
Of gas-shells dropping softly behind.

Gas! GAS! Quick, boys!—An ecstasy of fumbling
Fitting the clumsy helmets just in time,
But someone still was yelling out and stumbling
And flound’ring like a man in fire or lime.—
Dim through the misty panes and thick green light,
As under a green sea, I saw him drowning.

In all my dreams before my helpless sight,
He plunges at me, guttering, choking, drowning.

If in some smothering dreams, you too could pace
Behind the wagon that we flung him in,
And watch the white eyes writhing in his face,
His hanging face, like a devil’s sick of sin;
If you could hear, at every jolt, the blood
Come gargling from the froth-corrupted lungs,
Obscene as cancer, bitter as the cud
Of vile, incurable sores on innocent tongues,—
My friend, you would not tell with such high zest
To children ardent for some desperate glory,
The old Lie: Dulce et decorum est
Pro patria mori.
—“Dulce et Decorum Est” by Wilfred Owen

In contrast to the Latin phrase celebrated by Roman poet Horace (“It is sweet and fitting to die for one’s country”), Wilfred Owen and Timothy Findley, not to mention Dennis Garnhum, see this terrible platitude for what it is: an enduring lie against humanity. Pity us all.