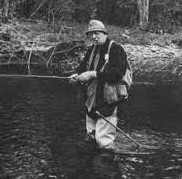 One of the highlights of more than three decades of writing about the arts for daily newspapers was reviewing the opening week of the Stratford Festival.

While nothing could draw me away from that cultural privilege, a thin shadow of regret fell over opening week festivities a few years ago when my fly fishing buddy Dan Kennaley started making annual sojourns to the Catskills during the very days I was immersed in the wonders of William Shakespeare.

Now as I’m about to celebrate my first year of retirement, I find myself in an enviable position. I can accompany Dan and his brother Martin to Roscoe, N.Y. to cast flies at wary trout during the last couple of days of May and the first few days of June. Moreover, since I no longer report to deadlines, I have made arrangements to review selected festival productions within a couple of weeks of opening performances. Finally, I can have my fish and theatre too — to mangle an old adage.

Although my partner Lois and I visited Roscoe for a few days in the fall of 2014, fishing was challenging because of late-season, low-water conditions in the region’s legendary trout rivers. So this is really my first trip to the cradle of American fly fishing in pursuit of serious angling.

Many fly fishermen anticipating such a trip would be busy tying flies to match late spring hatches. But I don’t tie my own flies. What I do instead is immerse myself in fly angling literature, so I perused my library in search of books and authors associated with the Catskills. I could do no better than reacquainting myself with an old literary friend — Sparse Grey Hackle and his classic Fishless Days, Angling Nights. 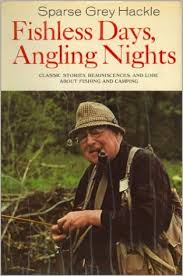 Sparse Grey Hackle was the pseudonym of Alfred W. Miller (1892-1983), a New York born and bred writer who worked as a reporter for The Wall Street Journal and contributed articles to such publications as Sports Illustrated, American Angler, Life, Sportsman and Outdoor Life. A clear-eyed conservationist as well as an avid fly fisherman, he edited a number of early angling literary classics when not casting a fly on his beloved Catskill waters.

Fishless Days, Angling Nights was the only book to bear the pen name Sparse Grey Hackle. The collection of previously published magazine pieces was published in 1971 by the Anglers’ Club of New York. (An Honest Angler, a collection of unpublished material edited by his daughter Patricia Miller Sherwood, was published posthumously in 1998).

Fishless Days is a charming book of recollections that paints an evocative picture of what it was like to fish the Catskills in the first half of the last century. Through humorous stories and tall tales — fish tales, is the more accurate term — we meet the people and the landmarks that defined the region as a pastoral mecca for sportsmen and sportswomen, not to mention fly anglers. If you want to know what fly fishing in the Catskills was like during its Golden Age, this is the book for you. Sparse Grey Hackle knew everyone, from master bamboo rod builder Everett Garrison, through fly angling pioneers George LaBranche, Ed Hewitt and Ray Bergman, to fly tiers Herman Christian and Ron Steenrod, the Darbees and the Dettes.

Sparse Grey Hackle begins Fishless Days with a tribute to his fly angling wife, Louise, whom he affectionately called Lady Beaverkill. Then he explains the book’s title and tackles the question of his nom de plume. The remaining stories pull back the blanket of time, recalling an earlier age, gone forever. But there are a trio that penetrate the patina of nostalgia and remain relevant to contemporary fly anglers.

The Quest for Theodore Gordon demonstrates the journalistic skills of real-life Alfred Miller as he interviews Christian and Steenrod, two legendary Catskill fly tiers/anglers who were personal friends of Gordon, who Miller describes as ‘the father of dry fly angling in America.’ Miller not only puts flesh and bones on the opaque mythic figure, but unearths where Gordon lies buried (accompanying his mother) in New York City’s Marble Cemetery. Miller’s reportorial quest casts a graceful arc between Gordon, who died in 1915, through Christian and Steenrod, to contemporary fly anglers/readers.

In The Perfect Angler, Sparse offers a meditation on the three components of successful fly angling. This is neither a showcase of gear, nor a treatise on technique. Rather it conveys the essence of (1) ‘finding a fish’ (2) ‘deceiving it into taking an imitation of its food’ (3) ‘hooking, playing and landing it.’ If anyone ever asks you as an avid fly angler to describe its essence, you could do far worse than point the enquirer to this fine piece of writing.

Finally Night Fishing deserves equal shelf space with any of the classic fly angling stories that populate the innumerable anthologies devoted to the sport/pastime/recreation on the strength of its narrative excellence. ‘Heat and fear oppressed the land, for it was one of those stifling, humid August nights when the whole countryside is awake and every living thing is abroad on the business of life and death,’ the essay begins. ‘The darkness was so thick and close that one tried instinctively to push it aside, and the air was heavy with the menace of predators and the terror of their prey. The river was soundless save for a faint spattering at my feet, a mere whisper which I could not identify. . . .’ 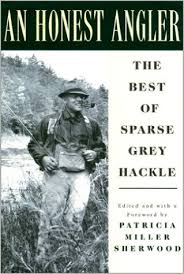 After reading Fishless Days, I happily turned to another old literary friend, Dana S. Lamb’s Where the Pools Are Bright and Deep, a collection of poetic essays devoted primarily to trout fishing in the Catskills and salmon fishing in Quebec. In the essay Season’s End Lamb writes about reaching ‘for a book he’s brought along; part of its title, Fishless Days, seems apropos. He reads and as he does he seems to travel to a land where it is always afternoon. Forgetting where he is he laughs so loudly that the chipmunks scramble for the rocks; a shadow falls across his face, a lump comes in his throat, he sheds a tear. He rolls his thoughts back forty years to days when Catskill trout were trout and they were — ’

Fly fishing set down roots in the Adirondacks and Maine before the Catskills, but the latter is routinely referred to as the cradle of American fly fishing because of the writers who made the area, located by automobile two hours west of New York City, ‘the richest literary tradition in American fly fishing,’ according to Tom Rosenbauer in his thumbnail history Fly Fishing In America. 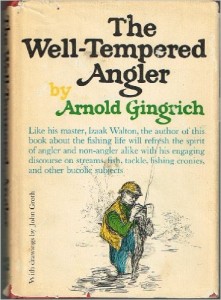 The Catskills attracted generations of fine writers, many of whom were based in New York City, arguably the world’s publishing epicentre during the last century. This literary tradition spans the legendary Theodore Gordon, through Sparse Grey Hackle, to Arnold Gingrich, the urbane founding editor of Esquire magazine.

Born in Michigan, Gingrich was an avid angler who championed lightweight gear and tackle on a Paul Young ‘Midge’ split-cane fly rod.  A collector of vintage angling gear, he was also a collector of angling literature and became an authority on the history of fly fishing literature (see his The Fishing In Print-A Guided Tour Through Five Centuries of Angling Literature). His The Joys of Trout and The Well-Tempered Angler are modern classics of fly fishing literature.

I’ve had The Well-Tempered Angler in my library for a number of years. But I didn’t read it until recently in anticipation of my trip to the Catskills. Had I known how much I would enjoy the collection of essays, I would have opened its covers long before now.

Like the best fly fishing literature, The Well-Tempered Angler is more of a meditation on the fishing life — as a reflection of an approach to living with its concomitant philosophy, moral code and ethics — than a how-to manual, though it does contain practical advice on light tackle fly fishing, in addition to a useful bibliography.

Gingrich recalls fishing with such angling luminaries as Ernest Hemingway, Ed Hewitt, A.J. McClane and Lee Wulff. Similarly he recounts angling adventures in Iceland, Ireland and England, as well as Quebec and New Brunswick, but he writes most fondly of his days spent on rivers in the Catskills.

As an armchair angler myself, I especially enjoyed Gingrich’s observations about the culture of fly fishing and the compulsive nature of collecting, not to mention the sport’s impressive literary tradition. Moreover, he’s such a gifted writer that his chosen topics are expressed eloquently and elegantly, with a dry wit. 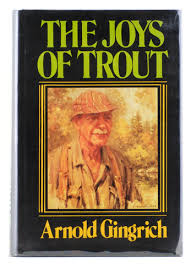 I was deeply delighted to purchase The Joys of Trout at the wonderful Catskill Fly Fishing Centre in Livingston Manor, a few miles from Roscoe on the banks of the Willowemoc. I enjoyed it immensely.

However, its title will undoubtedly mislead unsuspecting readers expecting tips on methods and techniques to be employed on the water. Even more so than its predecessor, The Joys of Trout is an alphabetical miscellany of activities associated with catching fish, which is to say, angling writers with a literary bent, historical lure and lore, angling and conservational organizations. I dare anyone to read what Gingrich has to say about Ernest Schwiebert — a Chicago-born angler who (like Hemingway) vacationed in Michigan — and resist the temptation to hunt down Remembrances of Rivers Past. I sure as heck couldn’t; I even picked up A River for Christmas and Other Stories for good measure. 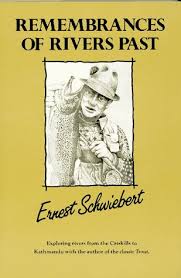 Like Gingrich, Schwiebert is a sophisticated, cultured, well-travelled angler/author. Whether recounting his early days fishing in Michigan and the midwest or praising legendary Catskill rivers and Pennsylvania limestone streams or travelling the world in pursuit of angling adventure to the British Isles, Continental Europe, Norway, Iceland, New Zealand or Patagonia, Schwiebert is a knowledgeable guide and charming companion. Anyone who appreciates fly fishing’s contribution to literature will be grateful for his account of his trip to Campbell River to visit Roderick Haig-Brown (The Orchard and the River in A River for Christmas).