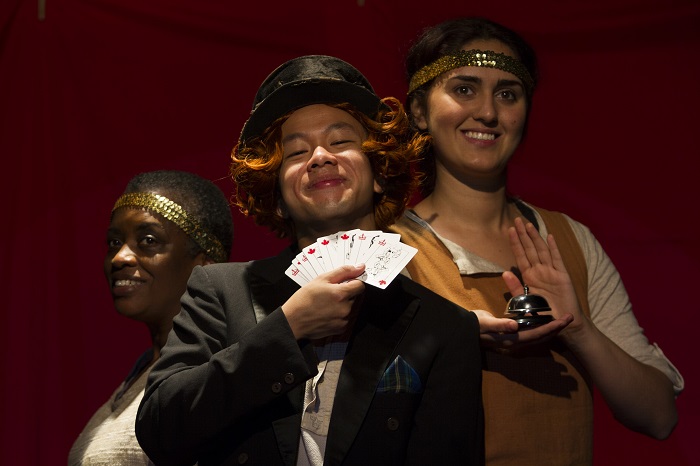 Where History and Story Meet

The Blyth Festival’s last two of four main-stage productions of 2018 examine roots and identity. Both 1837:The Farmers’ Revolt and Wing Night at the Boot have deep ties to the theatre and to the community. Similarly, both meet at the crossroads of history and story.

Pairing Wing Night with 1837 was a programming masterstroke by festival artistic director Gil Garratt, who directed the latter. Both plays share artistic pedigree as collective creations and both employ common methods and techniques.

Cast of 1837. Photo by Terry Manzo courtesy of the Blyth Festival

Let’s start with 1837. In 1974, a year before the Blyth Festival pulled the curtain back on its inaugural season, playwright Rick Salutin joined forces with director Paul Thompson and a group of actors to present the historical pastiche in what eventually became the Blyth Memorial Community Hall.

As artistic director of Toronto’s groundbreaking Theatre Passe Murielle, Thompson was an incendiary force in the explosion in Canadian theatre that erupted in the 1970s by introducing a form of theatre known as collective creation in which actors, a director and sometimes a writer(s) collaborate on a script through field research and improvisation.

The interesting thing about the project was that Salutin and company were using a nascent form of theatre to examine a nascent historical event—the Upper Canada Rebellion of 1837—which predated confederation by three decades.

Garratt’s multicultural cast forges a bridge connecting Upper Canada in the 1830s and Ontario in the 1970s with the Canada of today.

The production is a wild and woolly rollercoaster ride of parody, caricature and satire, slapstick and vaudeville, pioneer romance and polemic, cross-dressing pantomime and dramatic skits, sleight-of-hand magic and Punch and Judy puppets.

Given the role 1837 played in the growth of Canadian theatre in its hothouse years, not to mention the formation of the Blyth Festival, it is surprising that this production marks the return of this enduring play. All I can say is, Welcome Home. 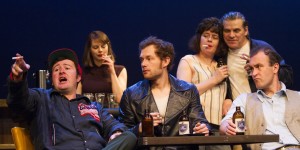 Cast of Wing Night at the Boot. Photo by Terry Manzo courtesy of the Blyth Festival

The sense of raucous, rollicking, rowdy fun spills over from 1837 to Wing Night. Directed by Severn Thompson (yes, she is Paul’s daughter), the collective creation developed in collaboration with the Blyth Festival company tells the story of the Blyth Inn—a village landmark that beats at the heart of the community.

The play traces the tavern’s history as a continuously operating business, which not only predates Confederation, but predates the village’s name-change from Drummond to Blyth. The tavern was known as the Commercial before it became the Blyth Inn.

Much of what we see and hear on stage will not be found in historical accounts. Thompson and her creative team don’t allow history to get in the way of story. Conjecture and speculation, recollection and reminiscence, complement verifiable fact. As one character notes, “history isn’t concrete.” Rather, it’s a slippery slope of beer, deep-frier grease and blood.

We hear the many explanations for the tavern’s nickname, the Boot, as we are introduced to its founders, succession of owners, cooks and servers and gallery of patrons who come to drink and eat, sing (live and karaoke) and dance, romance and fight, play shuffleboard and pool and compete in arm-wrestling and leg-wrestling contests. It’s not often that the festival employs a fight director (Anita Nitoly)

Flesh is put on the bones of generations of characters by the talented ensemble of Georgina Beaty, Graham Cuthbertson, Marion Day, Nathan Howe, Tony Munch and Daniel Roberts.

The Boot’s history spans a series of village fires, two World Wars, the Great Depression and Prohibition and unfolds through dramatic tableaux against a backdrop of song, music, dance and choreographed brawls.

As important as history is to an understanding and appreciation of our community and our country, Wing Night and 1837 remind us that the past does not live on without art.

Wing Night at the Boot & 1837: The Farmers’ Revolt continue in repertory through September 15.
Information & tickets are available online at blythfestival.com or by phone toll-free at 1-877-862-5984

Postscript: My first newspaper job was at the Strathroy Age Dispatch. I was delighted to learn that the newspaper’s first printing press was reputed to have belonged to William Lyon Mackenzie. Legend had it that the press was salvaged and reclaimed from Lake Ontario.

(Feature photo of [from left] Marcia Johnson, Matthew Gin and Parmida Vand by Terry Manzo courtesy of the Blyth Festival)