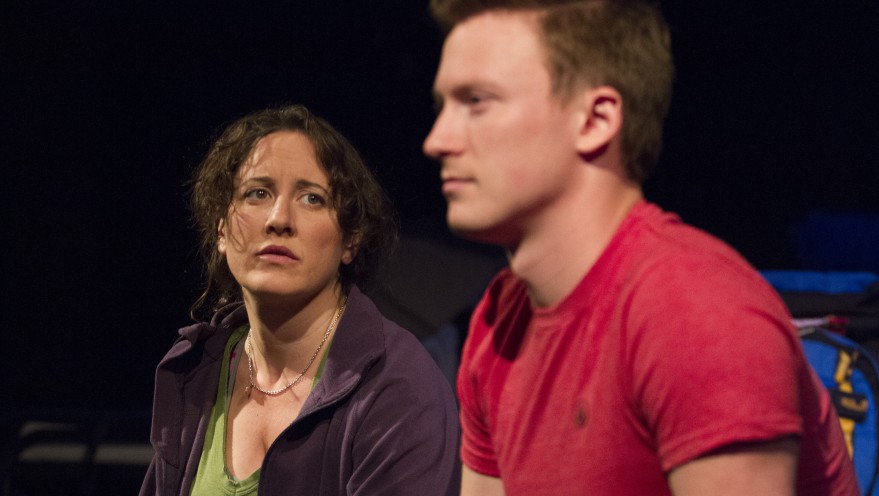 Seeing a World in a Grain of Huron County Sand

BLYTH — In his sophomore season at the helm of the Blyth Festival, artistic director Gil Garratt is staging a quartet of world premieres that tell stories harvested from the fertile soil of southwestern Ontario. Beginning with the opening pair, Our Beautiful Sons and The Birds and the Bees, and continuing through the late season pair, If Truth Be Told and The Last Donnelly Standing, the plays resonate with a core audience that has stood by the festival for 42 seasons.

Although the plays reflect and speak directly to faithful area supporters, their themes expand outward to touch the lives of us all. The plays present universal themes through the particulars of time and place. In other words, they ‘see a world in a grain of sand,’ as William Blake would have it.

This summer’s playbill follows a pattern Garratt initiated in his debut season when the festival mounted Seeds, The Wilberforce Hotel, Fury and Mary’s Wedding — plays either set in the area or that examine concerns pertaining to the area.

My partner Lois and I spent a wonderfully satisfying day of homegrown theatre in Blyth, attending performances of Our Beautiful Sons and The Birds and the Bees, punctuated with a delicious dinner at Part II Bistro. We dined after enjoying a Cowbell — a Kolsch style beer, featuring subtle yellow fruits, floral notes and the hint of lemongrass, produced by a new local craft brewery — at the Queens Bakery. 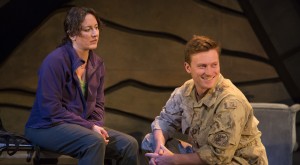 Rebecca Auerbach as Laurie and Jesse LaVercombe as Matthew

Consider this heart-wrenching moral quandary. You are parents of a son who was killed in Afghanistan. Your youngest son enlists with the goal of serving in the country where his older brother died. Recognizing the sacrifice the family has already made, the military gives you the opportunity of preventing your only surviving son from being posted in the war-ravaged country. What would you do?

That is the quandary Laurie and Lincoln Dinning faced in the aftermath of April 2006 when their son Matthew was killed by a roadside bomb in service of what he believed was his contribution to making the world a more peaceful place.

Christopher Morris’s Our Beautiful Sons is a compelling drama based on actual events that brought this Wingham, Ontario family perilously close to the edge of collapse. Subtitled Remembering Matthew Dinning, the emotionally searing play pays tribute not only to Matthew but to Laurie and Linc, not to mention their youngest son Brendon.

Morris, who has acted in three previous festival productions, spent three years working on Our Beautiful Sons. Constructing the creative space with which to transform pain, suffering and unbearable loss into dramatic art could not have been easy, especially for an emerging playwright. But Morris succeeds magnificently.

As Laurie, Rebecca Auerbach takes the brunt of the emotional devastation as she works her way through shock and disbelief, denial and guilt, anger and depression to eventually achieve a level of acceptance and hope. Her harrowing journey through grief to redemption — with its psychological, physical, social and spiritual layers — is oftentimes difficult to watch.

But Auerbach never flinches, recognizing that soft pedalling Laurie’s suffering would be an insult to both the mother and the memory of her deceased son. Auerbach’s performance is brave and magisterial. Garrett, who directs with sincerity and honesty, must share the accolade.

Although Linc is somewhat eclipsed by Laurie in the drama, J.D. Nicholson is superb as the OPP officer and Kosovo peacekeeper who doesn’t always connect with his sons, but whose love is unequivocal.

Gillian Gallow’s wonky set is an apt visual metaphor for a domestic world turned-upside down — despite an uncooperative fridge door during the performance we attended.

The turmoil in the Middle East is closer to home than we allow ourselves to think. My ex-wife has a nephew and Lois has a nephew who both served in harm’s way overseas. The danger was ever-present for family and friends. Like Brendon, they returned home to their loved ones, thankfully.

Our Beautiful Sons is a play of our times; sadly it’s a play for all time. Moreover, it’s a must-see production, as urgent and relevant as today’s terrifying headlines.

John Dolan as Earl and Nora McLellan as Gail

Holy Shit, I just had sex with a Cougar
— The Birds and the Bees by Mark Crawford

Actor-turned-playwright Mark Crawford made his Blyth debut as the pen behind Stag and Doe, a rural romp of a couple of season’s ago that was funny, but not as funny as The Birds and the Bees. As its title suggests, Crawford’s sophomore play is a sex farce, but it strikes a deeper chord as a comedy that uses sex as a metaphor for the random uncertainties of love.

As the comedy opens Sarah is returning home to her mother Gail. Sarah’s unfaithful husband has slipped into the greased arms of another; a situation Gail knows well, having fallen victim 20 years previously to her philandering husband taking up with her next-door neighbour and best friend.

The sexual shenanigans that unfold are a hoot, thanks to veteran actor Nora McLellan as Gail and John Dolan as Earl (‘if you want your toes to curl, spend the night with Earl’). Ditto for Marion Day, a gifted actor who has become one of the festival’s most enjoyable assets, as Sarah, and Christopher Allen as a Will Smith look-alike Ben.

The Birds and the Bees starts out as a wild and wooly sex farce, but deepens to touch the heart in equal measure with the funny bone.

Postscript: In recent seasons the festival has benefitted greatly from a pair of real-life couples. Rebecca Auerbach and J.D. Nicholsen, along with Catherine Fitch and Tony Munch, have brought considerable depth to the company.

Finally, the festival will be undergoing extensive renovations over the fall and winter, making it an even more hospitable place through which to mount the best in Canadian theatre. Gil Garratt was understandably proud when he announced before the curtain rose on The Birds and the Bees that it was the 125th world premiere the festival has mounted since 1975 — an extraordinary achievement.

I’m deeply grateful for the opportunity I’ve enjoyed reviewing productions at Blyth since 1984, when I first visited to interview Canadian theatre legend David Fox. I was a reporter for the Brantford Expositor at the time and I wanted to do a story on Fox, who was a high school teacher in Brantford before being bit by the acting bug.

(Featured image of Rebecca Auerbach as Laurie and Jesse LaVercombe as Matthew, courtesy of Blyth Festival)