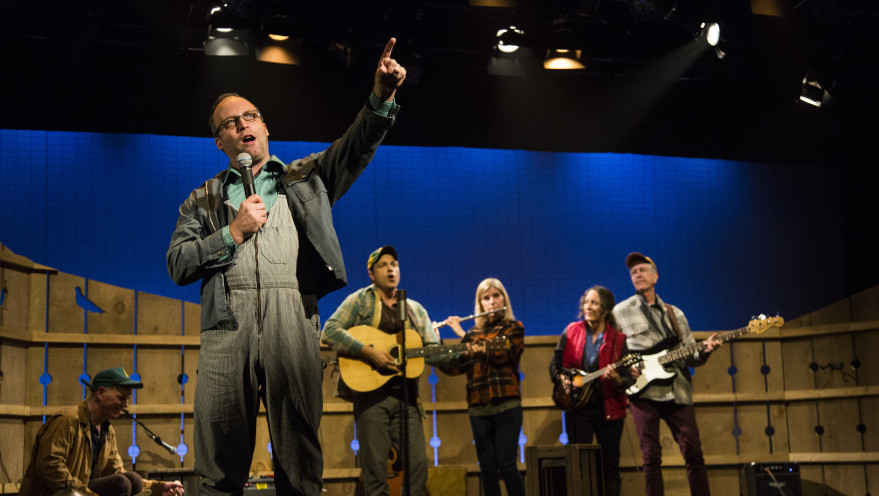 Who would think that a musical drama about a ponzi scheme would be so entertaining? But that’s exactly what the Blyth Festival has with the world premiere of The Pigeon King. Its most surprising production of the season continues through September 23.

The musical drama centres on Arlan Galbraith, the self-proclaimed Pigeon King who was convicted of fraud after bilking hundreds of rural investors in Canada and the U.S. of millions of dollars at the turn of the millennia. Galbraith made news headlines when he was sentenced in a Kitchener court to seven years behind bars.

In approach and execution, the production rings many festival bells. Directed by Severn Thompson, who returns to Blyth this season as associate artistic director, the production is the kind of collective creation developed by her father, legendary Paul Thompson, who also has strong ties with the festival.

This isn’t the first time Blyth has presented a world premiere of a drama about public fraud. In 1995 it mounted Stolen Lives, based on the true story of Albert Walker, the notorious Canadian financial guru from southwestern Ontario who bilked millions of dollars from his clients.

The Pigeon King combines factual details about how the ponzi scheme worked with the experiences of some of its victims gained through interviews. The narrative is punctuated with country flavoured songs delivered by cast members who play instruments on stage including guitars, mandolin, banjo, flute, bass and percussion. Despite the solemn nature of the crime, there’s much humour.

Although it’s easy to sympathize with victims who gambled savings or went into debt to take their chances on a dubious scheme, the play doesn’t draw easy conclusions or point a judgemental finger.

It’s clear the charismatic Galbraith operated an illegal business that defrauded investors, but the man himself, portrayed superbly by Garratt, remains an enigma — a folksy Rain Man. This might seem like a weakness, but it isn’t.

After all, in art as in life, it’s easier to describe what, when and where something happens rather than explain why. Motivation is not always obvious.

We feel sorry for those who were bilked because we are made to see how easy it would be to believe in Galbraith’s dream of deserving prosperity. Hope springs eternal.

Of all the regional theatres across Canada, no theatre has been as truthful and as faithful to its core audience as Blyth. It’s amazing to peruse its production history since its inception in 1975 and see all the plays it has presented that examine and celebrate rural issues generally and farming issues specifically.

It’s a glorious tradition that is sure to continue. And, by the way, you don’t have to live in rural Canada, to appreciate the contribution the festival has made to helping us all understand the breadbasket that feeds the nation.