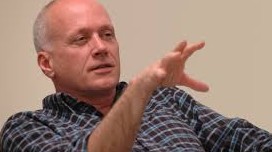 I became a Douglas Glover fan in 1983 after reading Precious while working at the Brantford Expositor. Brantford is not far from where the writer was born in Simcoe, Ont. — I worked at the Simcoe Reformer before The Expositor. He was raised on a tobacco farm outside of nearby Waterford. Since then I have eagerly anticipated each new novel or, later, work of non-fiction. He has become my favourite postmodern, metafictional novelist — to think, our very own homegrown Italo Calvino.

Because he worked early on at the Peterborough Examiner with Kathy and Dwight Storring and the late Malcolm Aird, colleagues at The Waterloo Region Record, I was kept abreast of the literary high jinks Glover was committing in beautiful Upper State New York, where he has lived, raised two sons, wrtten and taught for a number of years.

My praise has been unequivocal. After reading one of his books, I was placed in the enviable position of reviewing it for The Record. I enjoyed Glover’s fictional pyrotechnics so much I tried as best I could, given my limitations as a writer, to adopt a ‘Gloverian’ persona by appropriating his mischievous literary mask in which serious literature is disguised as fun.

Hopefully this critical masquerade enabled me to reflect through a funhouse prism some of the qualities that make Glover a one-of-a-kind writer. For, were he a fly rod, Glover would not be a commercially made graphite (even though there are wonderful rods made by venerable manufacturers), but a handmade, custom-built, split-cane bamboo rod.

I wore a ‘Gloverian’ mask in 2003 when I gleefully reviewed Elle, which went on to win the Governor General’s fiction award while making it as an IMPACT Dublin International Literary Award finalist.

I assume he appreciated my effort because he published parts of the review on his sundry literary websites:

Douglas Glover is a very serious writer. He’s also a wickedly, belligerently, intelligently funny writer with a scatological gift worthy of Rabelais . . . More to the point, he’s one of our most exuberant literary leg-pullers, a postmodern Jekyll and Hyde . . . Elle unfolds like a mad Creation myth dreamed by a French Eve, a Robinson Crusoe in drag, banished to Paradise, otherwise known as Canada . . . Glover’s so-called historical novels are simultaneously so much less and so much more. They are meditative literary pastiches that offer radically alternative views of what Canadians and, safe to say, the rest of the world, conventionally view as our history . . . In Glover’s fevered creative imagination, the colonization of the New World is not only a clash of cultures, old and new, European and indigenous, with their conflicting languages, histories, customs, mores, values and such, but a clash of mythological world views, a clash of dreams and visions. For, at bottom, Douglas Glover is a dreamer, bravely dreaming forward the dream that is Canada into the next millennium.

Sentence for sentence, Elle was the most exciting book of fiction I read this year, not only because of Glover’s felicity with language, but because of the ideas he explores with singular brilliance.

Good news awaits Glover fans who enjoy theatre. Toronto’s Theatre Passe Muraille is mounting the world premiere of a new stage adaptation by Severn Thompson. It opens early next year — to be specific, Jan. 14 and continues through Jan. 31.

Directed by Christine Brubaker, the production co-stars Thompson and Brandon Oakes. The theatre’s website succinctly describes the adaptation as follows:

‘Based on a true story from the life of Marguerite de Roberval, Elle chronicles the ordeals and adventures of a young French woman marooned on the desolate Isle of Demons in 1542 at the time of France’s ill-fated third attempt to colonize Canada.

‘The Sieur de Roberval abandons his unruly young niece, her lover, and her nurse on the Isle of Demons. With real bears, spirit bears and perhaps hallucinated bears, with the residue of a somewhat lurid religious faith, and with a world of self-preserving belligerence, the voluble heroine of Elle does more than survive.

‘Elle brilliantly reinvents the beginnings of this country’s history: what Canada meant to the early European adventurers, what these Europeans meant to Canada’s original inhabitants. While Marguerite de Roberval’s experience of Canada in 1542 is not as well known as Jacques Cartier’s, her open-minded engagement with that environment and its people was ahead of its time, and is certainly more relevant and inspiring for us today than Cartier’s attempt to colonize and conquer.’

I have been impressed with Thompson’s work at the Blyth Festival in recent seasons. After directing Beyond the Farm Show in 2013 she returned this season to appear in Annabel Soutar’s documentary drama Seeds.

Watching Thompson direct Beyond the Farm Show was especially interesting in that it was her father, legendary director Paul Thompson, who made Canadian theatre history in 1973 when he directed his collective creation The Farm Show.

Paul Thompson, who was raised in Listowel, was appointed artistic director of Theatre Passe Muraille in 1970, a position he held for 12 years before being appointed director general of the National Theatre School of Canada in 1987.

Although he has directed across Canada, including the Stratford Festival and vanguard aboriginal company Native Earth Theatre, his deepest mark was made while at Theatre Passe Muraille, where he directed 175 plays written by a Who’s Who of Canadian playwrights and authors at a time when Canadian theatre was coming of age. His productions at Blyth include such landmarks as Barndance Live, Death of the Hired Man, He Won’t Come in from the Barn and The Outdoor Donnellys.

I had the pleasure of conducting an onstage interview with Thompson in the Theatre of the Arts at the University of Waterloo while acting as writer-in-residence in 2002-03.

Information on Elle is available on the Theatre Passe Muraille website at http://passemuraille.ca/2015-16-season