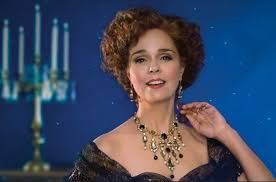 Send in the Clowns

STRATFORD — I have loved the beautiful heart-aching ballad Send in the Clowns since Judy Collins recorded it in the 1970s. However, I’m not a big fan of A Little Night Music, Steven Sondheim’s romantic romp of mismatched couples in turn-of-the-century Sweden. Inspired by Ingmar Bergman’s 1955 cinematic comedy Smiles of a Summer Night, the musical adaptation is too ‘vaudevillian’ for my tastes. And this despite Hugh Wheeler’s award-winning book and Sondeim’s clever lyrics.

Nonetheless, the original 1973 Hal Prince produced/directed operetta at the Stratford Festival’s Avon Theatre through October 23 is a delightful and pleasing production thanks to director Gary Griffin (West Side Story, Evita, Camelot, 42nd Street, Antony & Cleopatra) and a strong cast.

Widowed middle-aged lawyer Fredrik Egerman (Ben Carlson) is married to innocent 18-year-old Anne (Alexis Gordon). Nevertheless he still holds a candle for stage diva Désirée Armfeldt (Yanna McIntosh), daughter of Madame Armfeldt (Rosemary Dunsmore) and mother of Fredrika (Kimberly-Ann Truong). Désirée continues to love Fredrik long after their relationship has burned out, but is having an affair with the insanely jealous Count Carl-Magnus Malcolm (Juan Chioran). The flamboyant military dragoon flaunts his infidelity to his long-suffering wife Charlotte (Cynthia Dale), a school friend of Anne’s. Meanwhile, Fredrik’s son Henrik (Gabriel Antonacci) is studying for the Lutheran ministry while harbouring suppressed desire for his virginal stepmother. For the time being he contents himself with the more worldly maid Petra (Sara Farb). Everything comes undone during A Weekend in the Country as Madame Armfeldt watches the foolish lovesick antics unfold before her.

The cast is anchored by Carlson. Whether playing Shakespeare’s Hamlet, Petruchio or Benedick or Captain von Trapp in The Sound of Music, he combines flawless acting with a sweet tenor when required.

Dale’s Charlotte is feisty and fetching. She’s more than a match to Chioran’s stylishly buffoonish Carl-Magnus.

Dunsmore is a regal Madame Armsfedt, a woman of sexual intrigue with ‘royalty.’

With such roles as Anne Frank and Shakespeare’s Cordelia behind her, Farb is slowly and steadily making her mark at Stratford. She delivers a solo of The Miller’s Son that challenges McIntosh’s Send in the Clowns for creating goosebumps.

As a divine Désirée, McIntosh confirms she’s as gifted assuming musical roles as she is classical roles.

The award for most unexpected performance goes to Antonacci as the angst-riddled Henrik. He generates wonderful stage chemistry with Gordon’s Anne.

Debra Hanson’s period costumes are lavish, but the point of her set — imposing industrial city smoke stacks in the first act — escapes me given the musical’s plot and themes. I trust they’re not intended as huge phallic symbols.

The production falls under the capable baton of musical director Franklin Brasz who conducts a must-hear 19-piece orchestra.