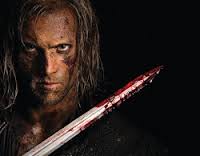 Portrait of Madness, Evil & the Supernatural in a Nightmare World

Blood will have blood
— Macbeth

STRATFORD — Macbeth is the most terrifying Shakespearian tragedy because of its portrait of madness, evil and the supernatural — all of which manifest themselves as reality rather than as metaphor, sign or symbol.

Stratford Festival artistic director Antoni Cimolino has constructed his production — a season highlight continuing through October 23 at the Festival Theatre — on the play’s three pillars of darkness.

Since taking over as artistic head in 2013, Cimolino has been working his way through the canon with impressive distinction. The Scottish play might well be his crowning achievement to date. Macbeth is my favourite Shakespearean play and I haven’t seen a better production since I began reviewing the festival in 1984. This is must-see theatre.

In contrast to Lear and Othello, Macbeth plunges into madness because of what he does as both source and agent of evil. Moreover, the evil Macbeth and Lady Macbeth bring upon themselves and unleash on the world around them is greater by virtue of being complicit and shared. It’s doubtful Macbeth, as ambitious and as arrogant as he is, would act as he does were his wife not at his side, whispering encouragement with the tongue of a serpent.

Contemporary directors don’t always know what to make of the supernatural in Shakespeare’s plays. Consequently, this element is often handled with a degree of campy forbearance or embarrassment — OK, Shakespeare wrote it, so we have to deal with it whether we like it or not. In contrast, Cimolino takes the supernatural to heart, as the playwright clearly did.

Here the Weird Sisters — Brigit Wilson, Deidre Gillard-Rowlings and Lanise Antoine Shelley — are cruel and malevolent ogres. The trio of sinister hags sets the tone, atmosphere and texture of everything that happens in this dark foreboding landscape devoid of sleep. Talk about terrifying.

Cimolino’s design team takes its cue with stunning effect. Julie Fox’s set, featuring lichen and rocks in the shape of a spearhead and bare spindly trees, depicts a primordial world close to a harsh, unforgiving northern landscape. Similarly Michael Walton’s lighting design evokes a world cloaked in darkness, save for hand-held torches that fail to illumine the dank corners where evil lurks. Finally Thomas Ryder Payne’s sound design is enough to raise creepy crawlers on the back of necks. This is a landscape of metaphysical terror. (I’m glad I attended a matinee performance with my partner Lois and left the theatre under sunlight). 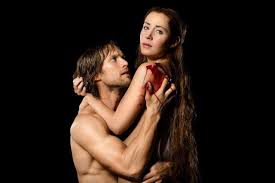 Lake is a younger Macbeth than we usually accompany on the ghost-haunted road of serial murder and assassination. Likewise Krystin Pellerin is a younger Lady Macbeth than we customarily meet. Using charm rather than guile to deceive the unsuspecting, Pellerin’s Lady M is dangerous because she’s so alluring. The actor makes us forget her years as Leslie Bennett on Republic of Doyle. I hope to see more of Pellerin on a festival stage in seasons to come.

Lake and Pellerin ignite a sizzling chemistry, murderous intent fuelled by lethal sexual passion, until they crash and burn, isolated and engulfed in madness.

Pairing a younger Macbeth with an older Duncan, played effectively by Joseph Ziegler, produces an intriguing father/son dynamic that recalls the gory tragedies of the ancient Greeks.

Michael Blake is a quietly noble Macduff, a man who despite his human flaws is honourable to the core. Likewise Antoine Yared is excellent as Malcolm, the future king.

Macbeth is the shortest play in the canon and Cimolino’s production has the propulsive force of a rogue locomotive barreling down on a car stalled at a railway crossing. You know what’s coming and all you can do is flinch and cover your eyes.

In addition to excellent ensemble work, the production is punctuated with scenes that leave deep impressions. Sarah Afful is a heartbreaking Lady MacDuff, chatting affectionately with her son (Oliver Neudorf). The banquet scene is spine-chilling, anchored by Scott Wentworth’s Banquo, a most frightening ghost. Finally Cyrus Lane’s garrulous porter provides a fleeting moment of comic relief.

Cimolino makes some small changes that are subtle but very effective. He opens with a battle scene rather than with the three witches, demonstrating that this is a world reduced to a bloody killing field. Before intermission Cimolino takes us through the banquet scene — where productions usually break — to Macbeth’s second encounter with the witches. It’s an utterly harrowing scene that leaves theatregoers aghast as they head for the washroom or snack bar.

This production serves as a fitting tribute to the Bard, as the festival marks the 400th anniversary of Shakespeare’s death.

If you are one who believes theatre just can’t live up to the thrills and chills of Game of Thrones, the exceedingly popular American fantasy drama TV series, I have a challenge for you: visit Stratford, Ontario and buy a ticket for Macbeth at the Festival Theatre. It might transform your life.