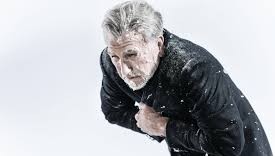 Modern Man in Search of a Soul

STRATFORD — The late Robertson Davies once observed that Canada’s two greatest writers were Anton Chekhov and Henrik Ibsen because both reflected a Northern sensibility. Symbolically speaking Davies was right on the mark — or so I believe.

How you interpret the Stratford Festival production of John Gabriel Borkman at the Tom Patterson Theatre determines the depth of your appreciation. It’s often stated that Ibsen’s penultimate play begins naturalistically and ends symbolically. But I contend that, to serve this profoundly metaphysical play fully, it should be read symbolically in its entirety.

If you read this regrettably neglected play naturalistically — as a domestic tragedy, a battle of wills pitting selfish and narcissistic people against each other — you will be less impressed than if you read it symbolically — as a battle between materialism and spirituality played out in a Northern psychological wasteland, more an interior mindscape than an exterior landscape.

In the former, the title character is a corrupt bank director with delusions of egotistical grandeur disguised as altruistic utopianism. This is the stuff of newspaper headlines and evening newscasts.

In the latter, he is Modern Man who has forsaken his soul by striking a Faustian bargain with industrial capitalism. By negotiating away love for ambition he reduces Nature, humanity’s home place, to economic resources to be exploited in the name of the 3 Ps — progress, prosperity and profit.

When read naturalistically, celebrated American director Carey Perloff’s production might leave you feeling alienated and dissatisfied. Conversely, when read symbolically it’s an exhilarating production that has something significant to say about humanity’s collective soullessness which is a deeper malady than existential despair. Designer Christina Poddubiuk’s set and costumes underscore a symbolic reading from start to finish.

Sigmund Freud greatly admired Ibsen’s late plays which were concerned more with unconscious forces than with social and political forces. If you want a primer to help you understand John Gabriel Borkman, pick up a copy of Civilization and Its Discontents. You might also consider C. G. Jung’s Modern Man in Search of a Soul. At bottom, the play is a dramatic enactment of the battle between Eros and Thanatos in which economic dream disintegrates into psychological nightmare.

Translator Paul Walsh and Perloff retain faith in Ibsen. They take the playwright at his word and, for me, it pays off handsomely. It also addresses some of the elements — heightened language, melodrama, anachronistic attitudes rife with chauvinism and sexism —that worry a contemporary audience.

Although the play’s five main characters are emblematic, the tightly wound ensemble —  a trio of skillful actors in Lucy Peacock, Seana McKenna and Scott Wentworth — puts human flesh on metaphysical bones. Admittedly Peacock going toe-to-toe with McKenna eclipses Wentworth, but this is more the result of the powerful dynamic the two actresses generate than a weakness on the part of the actor. (Experiencing Peacock and McKenna on stage together is one of the great privileges festival theatregoers enjoy these days.)

The play’s dramatic contour follows a downward spiral until the last scene which holds out the potential for redemption.

As it opens we learn that the Borkman family fortunes took a very great fall eight years previously when patriarch John Gabriel (Wentworth) was imprisoned after being convicted of using his position as a bank director to speculate with his investors’ money. After Borkman’s release he and his wife Gunhild (Peacock) are mutually imprisoned in their respective ‘mind-forg’d manacles’ (William Blake’s term) until they find themselves pitted against Ella Rentheim (McKenna), Gunhild’s twin sister and John Gabriel’s former lover, over young Erhart Borkman’s (Antoine Yared) future.

Erhard, however, wants nothing to do with either one of his parents or his aunt, who raised him after his father’s fall, and lights out with Mrs. Fanny Wilson (Sarah Afful), an older divorcee with a history.

Occasionally John Gabriel is visited by Vilhalm Foldal (Joseph Ziegler), a clerk who was financially destroyed by his friend and boss, but who holds no grudge through the simple kindness of his heart.

Ibsen wrote John Gabriel Borkman during the rise of the great industrial robber barons. But it takes little imagination to see how it remains relevant to the global market titans who control the world economy outside the checks and balances of national governments. As such, you can think of Perloff’s production as classical Greek tragedy in 19th century Norwegian dress — which unfortunately for all of us remains fashionable today.

John Gabriel Borkman continues through September 23 at the Tom Patterson Theatre. Tickets are available at stratfordfestival.ca

(Featured image of Scott Wentworth in the role of John Gabriel Borkman, courtesy of Stratford Festival)