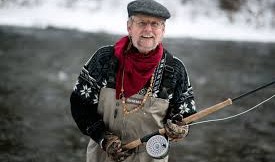 Casting a Warm Line on a Cold Hearted River

Pour a drink, light a fire and turn the page. I have a story to tell.
— Keith McCafferty in Preface to Cold Hearted River

… everybody needs something to live for, whether it’s a martini at six o’clock or one true sentence at ten.
— observation of a character in Cold Hearted River

Since publication of The Royal Wulff Murders in 2012, Steve McCafferty has become my favourite fly fishing mystery writer. And Cold Hearted River, his latest of six books in the Sean Stranahan series, is his best — so far and by far.

The reason is that it’s a fictional murder mystery wrapped around the treasure chest of a literary mystery involving one of America’s great writers. Considering that literature and fly fishing are two of my enduring passions, McCafferty had me — hook, line and sinker — from first page to last.

The novel’s title will tip off most readers to the writer’s identity because it’s a pun on one of his best stories — Big Two-Hearted River. Yes, it’s none other than Ernest Hemingway — the grandiosely bearded Papa of American letters and macho puffery who confined his flamboyant anima to the closet. 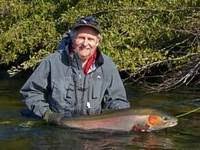 McCafferty has some connections to the legendary author which, at least for me, increases the novel’s interest quotient.

Both share a connection to upstate Michigan. Hemingway spent the summers of his youth there. The region provides the setting for some Nick Adams stories, as well as his first novel Torrents of Spring.

Similarly, McCafferty spent his youthful summers there, vacationing from Ohio with his family. It’s where he learned to fly fish. He recalls one memorable summer in a recent Field & Stream article — Wishing Tree: Fly Fishing Michigan’s Au Sable River. It’s a lovely reminiscence of the state’s Holy Water. Some of McCafferty’s personal story, which transpired one summer when he was 20 and working on stream restoration, is given fictional shape in Cold Hearted River.

Since this is a personal blog, I’m going to veer off the narrative path to touch on a couple of things. First, I’m a huge fan of some of Hemingway’s work, but not all. I love many of his stories, especially those set in Michigan, in addition to The Sun Also Rises, The Old Man and the Sea and A Moveable Feast. The rest leaves me unaffected.

I also have a passionate interest in upstate Michigan for reasons of literature and fly angling. The late, great Jim Harrison, one of my very favourite authors, was born and bred there. Another favourite writer (and Harrison’s close friend), Tom McGuane, has links to Michigan. I also enjoy the mysteries of Steve Hamilton and Joseph Heywood. Finally, the great fly angling essayist Robert Traver (author of a pair of classics (Trout Madness and Trout Magic) lived there.

I love bamboo fly rods and a disproportionate number of 20th century master builders called Michigan home. Finally, one of the classic American trout flies, the Adams, was designed there in 1922 by Leonard Halladay for his friend Charles Adams. The Adams remains one of the most popular, versatile and effective dry flies.

The connection between McCafferty and Hemingway, however, runs deeper.

McCafferty knew the famous writer’s oldest son, the late Jack Hemingway (a better angler than his old man), for more than three decades, dating back to when both were contributing editors for Field & Stream. McCafferty remains the magazine’s survival and outdoor skills editor.

In his Preface, McCafferty tells of a ‘blustery November day’ when the two were steelhead fishing on a stretch of British Columbia’s Thompson River known as the Graveyard. That’s when Hemingway first told McCafferty the story of his father’s steamer trunk being lost or stolen in 1940, en route from Key West, Florida to Ketchum, Idaho, where the writer was staying at Sun Valley Lodge. Hemingway eventually committed suicide while staying at his hunting camp in Ketchum.

The trunk was reputed to contain all of the author’s high-end fly fishing gear, including custom-built, American bamboo rods and reels from England’s venerable House of Hardy — and maybe, just maybe — a manuscript.

Hemingway’s only surviving fly rod, a Hardy ’Fairy’ model, is on display at the American Museum of Fly Fishing. (I saw it on display this summer when I made my first trip to the museum in Manchester, Vermont.)

McCafferty didn’t contemplate doing anything creatively with the tale of the missing trunk until years later when his wife, Gail, persuaded him to set a novel in northwestern Wyoming; where, as fate would have it, Hemingway spent five summers and autumns fishing, hunting and writing as a guest of the L Bar T Guest Ranch.

As part of his research, McCafferty verified details with Jack’s son Patrick and Valerie Hemingway, who was Hemingway’s secretary in the 1950s before marrying his son Gregory.

Such a fascinating back story sets up a compelling, speculative mystery. That McCafferty not only delivers, but exceeds expectations, says more about his gifts as a writer than either his connections or his research. 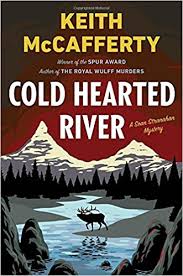 The tale begins when a woman goes missing in a spring snowstorm in the mountains. She’s found in a bear’s den by Sheriff Martha Ettinger and her on-again, off-again lover Sean Shanahan, a wildlife artist and fishing guide who moonlights as a private investigator. In a pannier of the dead woman’s horse, they uncover a leather wallet of old trout flies engraved with the initials EH.

It just so happens that a couple of days previously the president of the Madison River Liars & Fly Tiers had been contacted by a man selling vintage fishing gear he claimed belonged to Hemingway. However, before any transaction can take place, the man is found dead after being impaled on a sharp stick along a trout river.

Murder begets other murders, not to mention suspected suicides, on a trail of blood and tears that eventually leads to Hemingway’s missing trunk. Along the way, we accompany Stranahan as he journeys from Montana’s Madison River to Michigan’s fabled Au Sable River and, finally, to Cuba.

Of course, there are attractive women at every stop, in addition to master bamboo rod maker Pinky Gillum, legendary angling writer A.J. McClane and House of Hardy. It’s a veritable spinner fall for armchair anglers who enjoy casting their lines on a good mystery.

As if this weren’t enough intrigue and homicidal mayhem, McCafferty spices the action by speculating about the Hemingway curse (involving generations of suicide in the family).

Not yet content, he heats things up even more with a little holistic medicine in the form of shavings of wild, bull elk, antler velvet. Described at one point as ‘Viagra on the hoof,’ the substance allegedly cures whatever ails you including erectile disfunction and much else (arthritis, cartilage and muscle deterioration, progressive myopia, mood disorders, heart and immune system problems).

Grafting this ancient Chinese prescription on the limb of a story about one of America’s great icons of fragile masculinity is a sly ruse on McCafferty’s part.

The mastery with which McCafferty transforms a historical mystery of literary significance into a speculative mystery yarn is nothing less than a tour de force. A reader can never be sure where fact ends and fiction begins. Consequently, the novel should appeal to a reading audience beyond fly angling armchair mystery buffs.

It’s obvious that McCafferty has developed an assessment of Hemingway, which he expresses through a character in the novel — a retired professor of American and Spanish literature who bears an uncanny resemblance to Papa.

Here are his considered and perspicacious observations — of which I happen to agree full heartedly:

Hemingway the person is among the most misunderstood, vilified, and yet the most celebrated Americans of his generation, and I would venture among the most iconic figures of the twentieth century. He defined the American male, was labeled a misogynist, yet his relationships were with strong women and he championed their accomplishments. He could be shy behind his glasses, or generous and instructive. A bully and a bore, but by and large his friends forgave him his transgressions, because most of the time he was simply the best company you would ever find. His intelligence and enthusiasm were piercing lights to which people couldn’t help but gravitate.

Today, psychologists might argue that his mood swings were governed by bipolar disorder, and it’s been postulated that his bouts of paranoia and occasional grandiose delusions indicate schizophrenia. I would argue that the brain damage he suffered in an airplane crash in Africa was just as crippling to his work. Would he have written more, or written well longer, if he hadn’t drunk to excess, or if he’d remained with his first wife, Hadley, had her steadying influence and not been seduced by the fiesta lifestyle foisted on him by the rich? We’ll never know. But I believe his accomplishments are remarkable given his physical and mental challenges. We must always judge the whole man, not one plucked from a moment in history.

As with all writers of greatness, Hemingway’s critical reputation ebbs and flows with the tastes, mores and values of the day. But he’s never gone completely out of fashion. Readers around the world remain fascinated by this true larger-than-life figure who transcends literature nearly six decades after his death from a self-inflicted shotgun wound.

The Ambulance Drivers, which examines the friendship of Hemingway and John Dos Passos, by James McGrath Morris, was published this spring along with Andrew Farah’s Hemingway’s Brain (the first biography incorporating a forensic psychiatric examination) and Lesley M.M. Blume’s Everybody Behaves Badly: The True Story Behind Hemingway’s Masterpiece The Sun Also Rises.

The writer remains a flourishing academic cottage industry. Michael Reynolds’ five-volume biography, completed between 1986 and 1999, set the standard and has yet to be surpassed. Meanwhile, Hemingway, the Sensualist, Adam Gopnik’s essay in the July 3, 2017 issue of The New Yorker recalls Lillian Ross’s classic 1950s essay Ernest Hemingway Visits New York.

Sadly Hemingway ceased fly fishing after his gear went missing. I like to think a broken heart made that one true cast of fur & feather impossible.

For an assessment of Keith McCafferty’s five previous Sean Stranahan mysteries, see my earlier blog Our Man in Montana.