Our Man in Montana

Pour a Drink, light a fire and turn the page. I have a story to tell.
— Keith McCafferty from Cold Hearted River

One of my greatest regrets is not taking up fly fishing earlier in life. I came to the deeply pleasurable pastime after leaving 50 in my rear-view mirror. Moreover, I don’t spend long, dark winter nights at the vise tying my own flies.

Instead I read; not only instructional books from some of the acknowledged giants of the sport, but mysteries, poetry, short stories and literary novels. Anything with a fly angling theme. I actually started reading fly fishing literature long before I made my first awkward cast on dry land before wading into water.

One of the most productive tributaries feeding into the long and winding river of fly angling literature is mystery writing or crime fiction. These usually involve guides, fishing lodge owners or itinerant trout bums who become ensnared in murder, usually against their better judgment.

To be a good fly angler, you have to be a good sleuth. Not only do you need to be on intimate terms with the habitat and habits of fish in order to effectively ‘read’ the water, you need sufficient grasp of fly fishing technique to be successful.

The obvious link between fly fishing and detective work helps explain why the sport has infiltrated crime fiction to such an extent. Such classic genre writers as Agatha Christie, Ngaio Marsh and Caroline Graham have featured fly fishing in their mysteries.

Fly fishing sleuths have become a sub-species in American crime fiction. James Lee Burke writes knowledgeably and eloquently about fly fishing in his Billy Bob Holland series. Even his most famous detective Dave Robicheaux fly fishes when he occasionally ventures out of New Orleans to Big Sky Country.

There’s lots more, but these are some of the best fly fishing mystery scribes. Keith McCafferty is one of the latest to join the club. An award-winning editor for Field & Stream magazine, he lives in Montana. 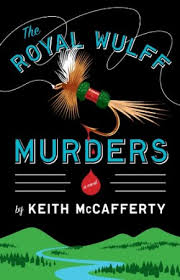 Montana is a fly fishing Mecca and, along with the sport itself, is a main character in McCafferty’s debut The Royal Wulff Murders (Viking).

Our fly fishing sleuth is Sean Stranahan, a passionate angler who earns money selling outdoor paintings. An ex-private eye, he moved to Montana from New England to invest in a new lease on life after his marriage collapsed. He lives year-round in an 18-pole, Sioux-designed tipi.

In his debut, he unwittingly becomes involved in murder after a good ol’ boy fishing guide reels in the corpse of a young fly fisher on the Madison, a legendary trout river.

As events unfold, Our Man in Montana crosses paths with Velvet LaFayette, a Southern Belle who pays the bills as a nightclub singer, and Martha Ettinger who emits a slow, amorous burn beneath her sheriff’s badge.

McCafferty is an accomplished writer. The setting is well-defined and his characters are not only well-rounded, they demonstrate potential for growth, like a good investment portfolio. Moreover, Stranahan has the depth and breadth to carry the weight of a series. 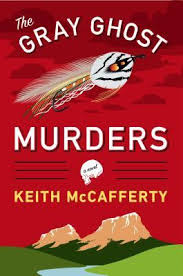 By the release of his sophomoreThe Gray Ghost Murders (Viking), McCafferty had become one of my go-to fly angling mystery writers — the literary equivalent of a pheasant-tail nymph or black wooly bugger, two of the world’s most dependable fly patterns.

The novel has a pair of mystery threads involving our reluctant hero which McCafferty masterfully splices together.

The first begins with the shallow graves of two men discovered by a search dog on nearby Sphinx Mountain. As this strand unravels, Stranahan discovers a death pact among outdoorsmen suffering from terminal illnesses who want to die a dignified death.

The other thread involves an eccentric group of fly fishermen called the Madison River Liars and Fly Tiers. Stranahan is hired to investigate the theft of two valuable flies owned collectively by the club.

One is a Quill Gordon tied by the legendary Theodore Gordon and given to his Neversink River fishing companion Roy Steenrod; the other is a Gray Ghost salmon pattern tied by Maine’s Carrie Stevens. (Gordon, Steenrod and Stevens are legendary figures in the world of fly fishing.) This thread is of particular interest to fly tiers.

Others can enjoy Stranahan’s torrid affair with Martinique, a sultry veterinary student who earns her tuition by selling coffee from a kiosk while clad in a skimpy bikini.

With The Gray Ghost Murders, McCafferty became a mystery writer well worth watching. Casting for hungry readers, he quickly became one of the best with rod and pen.

Dead Man’s Fancy (Viking), is the third instalment in the series. Instead of referencing actual fly patterns in the title, Dead Man’s Fancy is the name of a fly created by Stranahan’s friend and fellow fly fishing guide Sam Meslik. There’s even a colour illustration of it on the front inside book cover.

The novel continues the high standard established with the earlier mysteries. McCafferty sets up this one with a quote from Canadian author Margaret Atwood’s The Blind Assassin: ‘All stories are about wolves. All worth repeating, that is. Anything else is sentimental drivel.’

Wolves howl at sunset when a riderless horse returns to the Culpepper Dude Ranch, in the Madison Valley. Turns out the missing rider is Nicki Martinelli. Billing herself as the Fly Fishing Venus, the fetching young woman is ‘every fly fisherman’s wet dream’ (a catchy phrase, that).

Sheriff Ettinger oversees the search for the missing fly fishing diva. Tracking hoof prints in the snow, she finds one of the ranch’s wranglers impaled on the antlers of a giant bull elk. He’s one of many men to fall for the ‘flame-haired’ beauty.

As for Martinelli, long strands of her hair are recovered by a wildlife analyst in wolf scat, suggesting our delectable fly fishing dish served as dinner for a rapacious pack of howlers.

With Stranahan at her side, Sheriff Ettinger follows clues to an animal rights group called the Clan of the Three-Clawed Wolf and to its Svengali-like leader, a troubled and troubling man with a criminal past who wears red contact lenses to cast spells over innocent, young women.

The volatile politics that accompany the reintroduction of wolves into Montana form the backdrop of this compelling saga, which places Stranahan and the sheriff in the crosshairs of both wolf lovers and wolf haters — not to mention a sister with revenge in her heart. 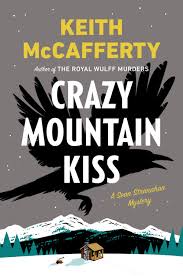 Crazy Mountain Kiss (Viking) will be disappointing to fly anglers, despite the title coming from a pattern Stranahan invented. There is little but perfunctory mention of the pastime in McCafferty’s fourth novel. While the ruse to attract readers beyond sportsmen might succeed, it could also end up as a bad cast, with line curled up at the feet of the writer’s waders.

As the novel opens, Stranahan and Sheriff Ettinger, who became lovers, are on the outs — romantically speaking.

It is spring in the Crazy Mountains when a member of the Madison River Liars and Fly Tiers discovers a Santa hat in the fireplace ashes of his rented cabin. Sadly, the hat was last worn by a teenage girl wedged in the chimney. Her belt buckle identifies her as Cinderella ‘Cindy’ Huntington who, following in the boot-steps of her one-armed mother, is a rising rodeo star. The girl went missing with a young man the previous autumn.

Was Cindy murdered or a victim of misadventure? Suspicion eventually falls on a  Jeremiah Johnson-like mountain man who goes by the moniker of Bear Paw Bill.

Although the sheriff and her deputies are doing everything they can, Stranahan is hired by the dead girl’s mother to find answers that elude law enforcement. His investigation leads to a high-altitude sex club, a lost diary, a pair of rodeo clowns and cave pictographs against a backdrop of disturbing legends of how the Crazy Mountains acquired their name.

As an armchair angler I certainly miss the fly fishing. But there’s no denying McCafferty is a fine mystery writer. He compares favourably to veteran crime writer C.J. Box in his Joe Pickett series.

Following a pattern of a new release annually, Buffalo Jump Blues is McCafferty’s fifth crime novel in as many years. As with its predecessor, fly angling takes something of a back seat to the mystery. 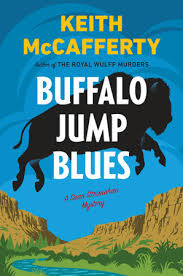 In Dead Man’s Fancy (Viking) McCafferty explored the politics associated with the reintroduction of wolves in the West. This time out he deals with the similarly controversial subject of the reintroduction of buffalo outside of national parks. In this respect he is tracing the bootprints of Box who often incorporates topical environmental or wildlife concerns in his mysteries — McCafferty mentions Box in passing in Buffalo Jump Blues.

The novel opens amidst the bang of 4th of July fireworks in the Madison Valley. Sheriff Ettinger is investigating a horrific scene at a local cliff, at which a small herd of buffalo have fallen to their deaths. The question is whether the buffalo were victims of panic caused by the annual pyrotechnics or were slaughtered in a hunting ritual practiced for millennia by Native Americans. The plot thickens when among the dead buffalo Ettinger discovers the body of a young Native man pierced by a broken arrow.

Meanwhile Stranahan is working for Ida Evening Star, a sexy young Native woman who is paying her way through college as a mermaid in a fish tank at the Trout Tails Bar & Grill. Ida has hired Stranahan to find John Running Star, a boyfriend from her adolescent past who unexpectedly shows up at the bar.

Although the cases seem unrelated initially, they cross at the intersection of murder involving a pair of spoiled prep school twins who are fly angling psychopaths.

Upon turning the last page of Buffalo Jump Blues I began marking the days until the release of the next Sean Stranahan mystery with same urgency of counting down the days before the opening of trout season.