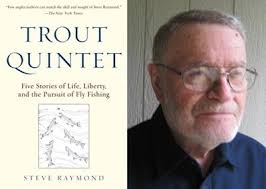 Trout Quintet: Music to My Eyes

Steve Raymond is a gifted fly fishing writer living in the Pacific Northwest. A retired manager at the Seattle Times and an editor of a couple fly fishing magazines (Flyfisher and Fishing in Salt Waters), he’s written 10 non-fiction books including a Civil War history and nine angling books.

A fisherman primarily of trout, steelhead and salmon for more than half a century, Raymond’s fly angling books — especially The Year of the Angler and The Year of the Trout, as well as his memoir Rivers of the Heart — are contemporary classics.

Here’s what that most literate of angling writers (and longtime publisher of Esquire), the late Arnold Gingrich, had to say in Fishing in Print: ‘This has it… I can readily conceive of reading The Year of the Angler again and again… Its worth warrants a long life, and therefore many printings… Raymond is someone simply not to be missed….’

Subtitled Five Tales of Fly Fishers and Trout, it tells stories with which fly anglers can identify. At the same time, the collection carries forward familiar themes and recurring narratives found in the rich tradition of fly angling literature. Finally, it casts a line on some of the ethical waters that habitually preoccupy fly fishermen.

I’ve always thought of Raymond as filling the waders of legendary fly fishing writer Roderick Haig-Brown (1908-1976). Haig-Brown lived on the banks of the Campbell River on Vancouver Island after emigrating as a young man from his native England. He was acknowledged as the dean of fly angling writers, which was high praise in a century that boasted more accomplished authors than in any previous century in fly fishing’s long history.

The almanac is a popular form of pastoral literature that has been adopted and adapted by angling writers down through the ages. It’s a form Haig-Brown used, as has Raymond. The Year of the Angler and The Year of the Trout follow the seasonal cycle on which a trio of Haig-Brown classics are constructed: A River Never Sleeps, Measure of the Year and The Seasons of a Fisherman: A Fly Fisher’s Classic Evocations of Spring, Summer, Fall and Winter Fishing. 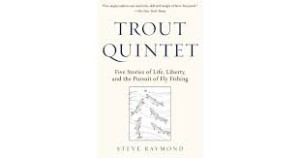 Similarly, The Man Who Came Back as a Trout, the opening story in Trout Quintet, honours Haig-Brown by playing a new riff on the venerable animal story, a tributary of sporting literature with parallel currents of nature writing and angling writing.

Haig-Brown wrote three ‘animal fictions’, which he described as ‘the accurate telling of a natural story of a natural animal in its natural world’ (Italics mine). The most celebrated of these is Return to the River, which portrays the life of a salmon from the salmon’s perspective.

One of the finest examples of nature writing is Salar the Salmon, by Henry Williamson (1895 —1977), an English army officer, naturalist, farmer and rural writer known for his novels of nature and social history. The anthropomorphic tale traces a salmon’s final journey upstream, told from various perspectives, both animal and human.

There are numerous examples of angling writing that present the piscatorial world through the eyes of fish including Datus Proper’s What the Trout Said (recommended in Steve Bodio’s Sportsman’s Library) and Brian Curtis’ The Life Story of the Fish: His Manners and Morals (recommended by Gingrich in Fishing in Print).

In The Man Who Came Back as a Trout, an avid fly fisherman is reincarnated as a trout who is returned to his favourite trout stream. Here he encounters fly anglers he knew before he died, including his best friend.  We learn about trout, their habits and their habitat. As well, we learn about the habits of fishermen — those we admire for their sporting morals and those we condemn for their wanton predatory lust.

No-Fly Zone is a courtroom drama predicated on an angler’s worse nightmare — a world without fishing.

Garrett Vernon is down on his luck, having lost his wife, his home and his job. Hopelessly desperate he seeks refuge in his only solace — fly fishing. But there’s a problem.

Congress has passed the Water Resources Protection Act. Designed to protect all waters on public land for ‘domestic water supply, hydroelectric generation, agricultural irrigation and commercial ships traffic,’ the law prohibits fishing. Reluctantly Garrett succumbs to a powerful impulse, makes a few tentative casts, catches and releases a trout — and, in the process, is caught and charged by authorities intent on making an example of the wayward angler. Now he’s in court. His defence is temporary insanity, argued by an uncharacteristically sympathetic public defender.

It would be an entertaining piscatorial dystopian story — The Handmaid’s Tale meets A River Runs Through It — were it not for recent political events in the U.S. which Raymond could not have predicted. Newly elected Prez Donald Trump’s championing of the fossil fuel industry at the expense of conservation and fresh water preservation makes the story’s premise a helluva lot scarier than speculative fiction, however relevant and urgent.

Politics aside, there are other serious threats to sports fishing; foremost, invasion of Asian carp which poses a devastating threat to the fresh water fisheries of North America.

(I wonder if the story is a tip of the oilskin fedora to Robert Traver, who wrote the fly angling classics Trout Madness and Trout Magic, in addition to Anatomy of a Murder, a courtroom drama featuring a fly fishing defence lawyer. Traver’s novel was adapted into an Oscar-nominated film produced and directed by Otto Preminger, with music by Duke Ellington and an all-star cast featuring James Stewart, George C. Scott, Ben Gazzara, Eve Arden and Lee Remick.

An Honest Angler addresses the outdoor media’s dirty, not-so-little secret, which entails writers, as well as program hosts, accepting freebees in return for courtesy coverage. It’s an endemic and pervasive cornerstone of the outdoor media, which leaves an unsavoury stain on hunting and fishing across print, radio and television.

In the story Jake Stone, editor of Salmo magazine, has just returned from a steelheading junket to Alaska. ‘As usual,’ he was ‘a non-paying guest’ at a lodge. ‘Also, as usual, there was a clear understanding with the lodge owner that in return for being a non-paying guest I would write a favourable account of my stay. Anticipating publication of the article, the owner even purchased an expensive full-page colour advertisement to run in the same issue (of the magazine).’ A queasy conscience doesn’t prevent him from writing exactly what was expected.

Back in his office he finds among the pile of manuscripts, junk mail and letters an invitation to be the inaugural guest of Troutwaters Lodge — an exclusive, 600-acre property in Montana ‘dedicated to the conservation, sporting capture and glorification of wild trout.’ The lodge is owned by a ‘reclusive, eccentric billionaire software developer’ whose only interest besides computer software is fly fishing.

As it turns out, the eccentric fly fishing fanatic wants to reintroduce and institute an ethical impressive or moral aesthetic applied to fly angling. He has chosen Jake as his first convert and champion because of his history of dishonourable journalism.

The majority of professional journalists will recognize the ethical issue at play here. For readers unfamiliar with the issue, here’s a contextual synopsis

This practice is more egregious than journalists or program hosts compromising professional standards by promoting, endorsing or advertising — known as  ‘advertorial’ in the media biz. The I-scratch-your-back, while you-scratch-my-back practice substitutes fair, honest, balanced coverage for biased, compromised, subject-friendly coverage.

It’s a tainted contract between subject and journalist/host to exchange pusillanimous coverage in return for amenable compensation in the form of free transportation, accommodation and guide services — with all the perks. It also takes the form of free products from sports gear manufacturers and brand-adorned clothing, boats and trucks. We’ve all seen the decals splashed over shirts, hulls and side panels making anglers look like Formula One race-car drivers.

The practice is a twist on chequebook journalism. Whereas the conventional arrangement involves a news source being paid for information, this involves a media organization, whether magazine, radio or TV show, accepting ‘gifts’ in return for agreeable coverage. I call it courtesy journalism. The World Fishing Network and its supporting shows thrive on it like voracious piranha in a feeding frenzy.

Raymond doesn’t restrict his ethical concerns to the media, however. Readers familiar with the long history fly fishing will acknowledge its tradition of ethical navel-gazing, which is often more a matter of etiquette than morality dating back at least as far as that presumed Godmother of fly fishing, Dame Juliana Berners.

The ethical debate reached its apex at the turn of the 20th century when two Englishmen, Frederic M. Halford and G.E.M. Skues, duked it out over the moral superiority of dry fly and wet fly, respectively. The ‘purity’ debate continues to this day in less turgid ethical waters over weighted nymphs and split-shot, indicators and sinking lines, light fly rods and fishing over spawning fish. There’s even controversy over catch and release in the name of conservation vs catch and not release in the name of the frying pan.

Now to return to our story. Jake eventually accepts an offer he can’t refuse — to become An Honest Angler and write about his conversion. The first chapter in his ethical Pilgrim’s Progress is reflected in the pages we have just read.

The collection’s penultimate story, The Nehallis Incident, is the most mysterious tale in the collection. It tells of a man who is enjoying a morning of casting fur & feather when a young stranger shows up and asks to borrow his gear so he can fish for a while. The older man refuses and is sent packing at gun point after being instructed to leave his fishing gear behind.

Like No-Fly Zone, the story reaffirms the sense of solace that fly fishing offers to those who find serenity by wading in peaceful waters while waving a long, tapered rod in a graceful arc.

From Ernest Hemingway’s Nick Adams short story to Ivan Turgenev’s breakthrough novel, the dynamic of Fathers and Sons is a recurring theme that has provided many a fine day on literary waters for angling writers.

Raymond offers his take on the theme in One Size Fits All, the concluding story in Trout Quintet. An old tattered hat, believed to possess magic powers, brings a troubled, fatherless, trailer trash kid and a childless, fly angling father together. It’s a tender tale of the tie that binds — casting fur & feather at wily trout.

Trout Quintet is a lovely read. I suggest readers take a cue from its author. Find a comfortable armchair in front of the fire, pour of a couple of drams of malt whisky, put Schubert’s delightful chamber work on the CD player and savour stories that are not so much about the joys of angling as the wonders of life.