Call of the Canoe

Those who glance at a map of southwestern Ontario might conclude — erroneously as it turns out — that Waterloo Region neither hears nor heeds the call of the canoe. Situated equidistantly between Lake Huron and Lake Erie, the region appears landlocked.

Take a closer look and a different topography emerges, as you follow the historic, heritage Grand River and trace its watershed boasting myriad navigable tributaries and reservoirs. Then notice all the rivers no more than a couple hours’ drive away: the Maitland, Saugeen, Bighead and Thames among others. It might not be Algonquin Park, the Kawartha Lakes, Muskoka, Algoma or North of Superior, but its far from an arid wasteland.

Waterloo Region and its immediate environs have outfitting rentals and retailers, guides, instructors, manufacturers and clubs, not to mention film festivals, writers and artists, associated with all things canoe.

The region also has the KW Canoe Symposium. The brainchild of David Bain, an elementary school teacher, conservationist and avid canoeist, the annual celebration of the canoe — which returns Saturday — is celebrating its sixth year. It not only endures; it continues to attract capacity crowds at the Princess Twin, the Waterloo-based independent theatre operated by a couple of enthusiastic canoeists, John Tutt and life partner Wendy Guymer.

I’d like to take the opportunity of the symposium to introduce canoeheads, as well as fly anglers who canoe, to a lovely book about the joys of canoeing published by Stonegarden Studios.

River-Places features poems by Bruce Lumsden and serigraphs by David Hunsberger, both of whom call Waterloo Region home. Stonegarden Studios is a literary garden planted, nurtured and harvested by Judith Miller, a retired English professor at Renison College University. Before relocating in Ottawa, she devoted her abundantly sympathetic creative talents to fostering community arts across the region. She has since turned over Stonegarden to Karl-Griffiths Fulton (designer of River-Places) who remains committed to publishing local artists and writers.

Lumsden came to Waterloo from Toronto to work as an administrator in various capacities at the University of Waterloo. In 2012 Stonegarden published an earlier poetry collection, Toronto, Toronto. Kitchener-bred Hunsberger is a prominent regional printmaker who opened a studio after graduating from UW in 1976.

Although poet and printmaker had not met until River-Places was in production, both have been enthusiastic naturalists and canoeists for many years. Their mutual love of the Canadian wilderness blossoms in their creative collaboration of word and image.

Lumsden’s poetry is direct and immediate. It’s accessible lyric storytelling; a reader doesn’t need an English degree to understand and appreciate it. He takes readers on an emblematic canoe trip which is a memory composite of many trips over many years.

We join him in the ‘hiss of anticipation’ while heading north by car and leaving civilization in the rearview mirror. We accompany him as he hits the water, sets up camp and enjoys a meal with paddle soulmates around the campfire, runs rapids and washes out, portages and backpacks, eventually returning to civilization by ‘[backing] into other lives.’

We share in the daily rituals and comradery that give deeper meaning to wilderness travel and exploration. We experience nature in all her myriad splendour from dawn to dusk to dawn, in all weathers. Occasionally Lumsden expresses intimations of something beyond the existential rituals of paddle and canoe, ‘creations of simplicity and utility,’  as in First Lights when he writes:

The beauty of the day
seeps through our bones
as we slip into
the deep quiet of the night
and the overwhelming enormity
above us.

We have come full circle
experiencing the wilderness
in companionship and in solitude
traveling over land and water
endless.

Hunsberger’s serigraphs were not actually inspired by specific poems; rather the relationship between word and image developed sympathetically and symbiotically, compatibly and complementarily. The illustrations give readers a focused, concentrated, intimate look at nature — her waters and shorelines, trees and plants, rocks and skies, not to mention the play of light and shadow that animates a world both organic and inanimate. 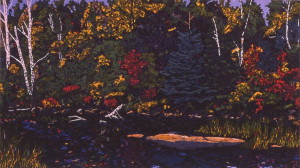 Reminiscent of the paintings of Tom Thomson, an obvious mentor of both poet and printmaker, Hunsberger’s perspective on the landscape comes most often from the stern of a canoe on the river or tracing the shoreline.

Leafing through River-Places I’m reminded of a retrospective exhibition of Hunsberger’s silkscreen prints at Cambridge Galleries in 2005. Titled Sylvan Passage, it featured prints completed between 1988 and 2004. My comments then remain relevant to his work, which is immediately recognizable through a signature style, a fusion of creative vision and technique.

Before he retired from the rigours of printmaking, he worked in small editions of about 40 prints, utilizing 10 to 15 colour separations for each print. His use of overlapping transparent colours increased the number of observable colours beyond what he actually printed.

It’s clear from many titles that Hunsberger references actual locales — Oxtongue Morning, Hornbeam Twist, Crane River, Spanish River, Petawawa River, Dumoine River and, closer to home, Forwell Creek. Others are more general — Autumn Brook, Point of Land, Precipice, White Water and At the Rapids. Whether specific or general, he isn’t so much interested in identifying a particular location as representing nature emblematically, metaphorically or symbolically.

Hunsberger is on intimate terms with the natural world; he knows the familiar often transforms into the unfamiliar. Consequently, a print capturing the haunting mystery of fog or mist rising off a river is titled Breathing River. You don’t have to be a churchgoer to apprehend a sense of the sacred or the Holy.

Hunsberger celebrates nature up close and personal. We know all too well that the natural world he celebrates is threatened by industrialization and urbanization. This gives his images a hint of the reflective, meditative and elegiac amidst the joyous dance of colour.

Now let’s return to the sold-out KW Canoe Symposium, with its five presenters including:

• Drew Czernik will regale fellow canoeists about paddling 100 lakes in 100 days in his beloved Algonquin Park where he has worked the past 18 years.

• Jim Baird, aka Jim the Adventurer, will recall one, or any number of, extreme canoeing journeys that separate the real deal from the pretenders and wannabes.

• Stephen Orlando will showcase his unique light photographs that capture the balletic beauty of the paddle stroke.

The symposium is rounded off with a musical presentation by the Tumpline Symphony Orchestra.