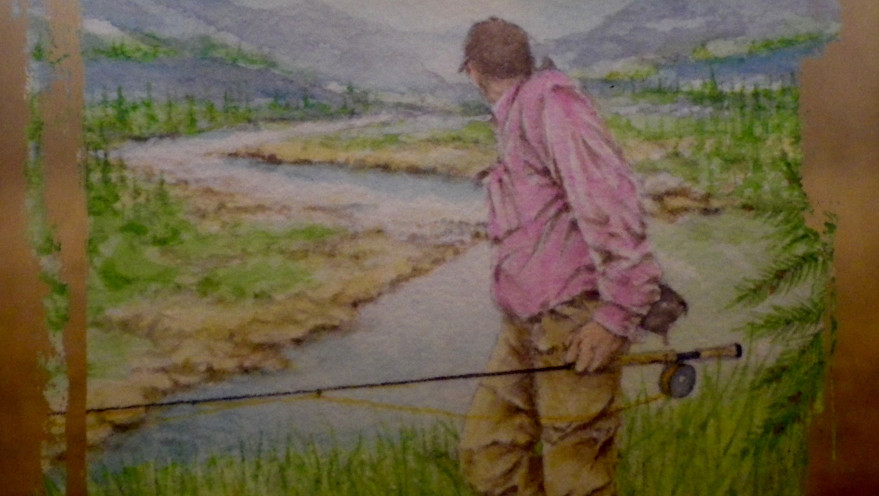 Around the Next Bend

Jun 16th, 2015 Armchair Fly Angler Last modified 7 years ago
As an avid armchair angler who read about fly fishing long before I ever worked up the courage to try it, I never leave a fly shop without perusing its selection of books.
On a visit to Hunter Banks, the first-rate fly shop in the heart of downtown Asheville, N.C., I noticed Around the Next Bend, the fourth book by Jerry Kustich, the former Winston bamboo-rod maker who left with Glenn Brackett to set up Sweetgrass Rods. I thought about buying the book, but decided against it.
A few days later I saw the book, subtitled A Fly Angler’s Journey, in Roscoe, N.Y. at the Catskill Fly Fishing Centre and Museum. With the discount on books that came with my museum membership, I couldn’t avoid picking up a signed copy. I’m glad I did.
Although he lives in Montana, Kustich was born and raised in Buffalo. His passion for fly fishing was triggered by steelhead fishing in the tributaries flowing into the Niagara River, Lake Erie and Lake Ontario. He returns regularly to western New York to fish with his brother Rick, who operates a fly shop and, like his brother, is an angling author.
On the evidence of Around the Next Bend, Kustich knows Ontario well. You don’t read too many American fly fishing writers who recognize the late Red Fisher. In an essay about fishing for walleye, he recalls: ‘This plaid-clad guru of Canadian backwoods outdoor shows would take eager TV fans on adventures to magnificent places so full of Northern pike and walleye that it was impossible not to be swayed into the walleye way of thought. Other thanHockey Night in Canada, his was the only show worth watching on the Canadian television network in the fifties.’
If you need additional evidence that he is on familiar terms with the Great White North, check this out: ‘Rick and I had just finished steelheading a Lake Ontario tributary on a blustery snow-filled November day in Ontario. We were so cold that the next step in the state of our discomfort would have required intensive care. In Canada, Tim Hortons doughnut shops are as plentiful as gas stations, and there always seems to be one strategically located near every steelhead river in the country — east and west.’
And finally, recollecting a steelhead adventure in British Columbia, he records: ‘Over a three year period I spent nineteen days fishing a river on the mainland across from Vancouver Island that was once frequented by Roderick Haig-Brown. I landed only one steelhead during that stretch, but under a canopy of old-growth cedar I can’t deny there wasn’t a captivating sense of timelessness fishing in the company of the legendary master.’
These three passages reveal a lot about Kustich as a man, a writer and a fly angler. He is as far from a fly angling snob as you can get. He’s not averse to fishing with hard tackle, even live bait, when the occasion demands. He writes about fly fishing for all species, including such bottom feeders as carp, sheepshead and freshwater drum.
He recounts learning to write about his passion, and examines river etiquette and angling ethics. He strikes cautionary notes about environmental degradation and he champions ecological responsibility. But his deepest passion is fishing for wild trout with a split-bamboo rod made by dedicated craftsmen. You gotta love his priorities.
Around the Next Bend takes a meditative turn in the last couple of essays in which Kustich deals with the illness that eventually claims his wife. In his penultimate essay, The Tipping Point, he observes that ‘fishing (is) more about solitude and reflection than anything else.’ He then ponders ‘what a drag heaven would be without a trout stream’ before coming to the conclusion that, ‘life on a river full of trout already seems like heaven.’
Kustich is self-deprecating and witty. As such he is a fine companion when the rod, reel, flies and waders are put away, the flames are glowing in the fireplace and a dram of malt whisky is within reach. I have read his earlier volumes, At the River’s Edge: Lessons Learned After a Life of Fly Fishing and A Wisp in the Wind: In Search of Bull Trout, Bamboo and Beyond with equal pleasure.