The one-word welcome is imbedded in the collective memory of a generation of television viewers. It was directed at the sad-sack tippler who planted his sardonic frame on the southeast corner of the square bar around which the hit TV show Cheers was built.

Although Norm had a last name — Peterson — he really didn’t need one. Whether or not we recognized it, we intuitively knew who he was: the poor nephew of Willy Loman, the tragic Everyman at the heart of Death of a Salesman.

It’s a bit of casting magic that George Wendt — the six-time Emmy nominated actor who played Norm in all 275 episodes of Cheers — is in St. Jacobs at the Playhouse starring in Drayton Entertainment’s production of the 1949 Pultizer Prize and multiple Tony Award winning play that made Arthur Miller a household name. (It didn’t hurt that the playwright was married to Hollywood siren Marilyn Monroe for five years, divorcing 19 months before she died of a drug overdose).

Acknowledged as one of the great plays of the 20th century, the drama might well be the best-known work in American theatre. With roots extending back to classical Greece and running through Elizabethan England, the modern-day tragedy traces the last days of a failed salesman — and defeated man.

Death of a Salesman gave common currency to the notion of The American Dream and it’s intriguing how the play speaks to Donald Trump’s America. 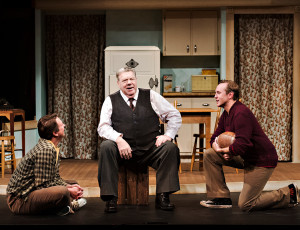 The Loman household is constructed of the straw of delusion, held together by the mortar of deception.

In his sixth decade, Willy is as insecure as he’s unstable. Unable to separate illusion from reality, he distorts and misrepresents events from the past. He dreams of being a successful salesman, which he confuses with being liked by others. Flashbacks confirm that he equates happiness with wealth and popularity, both of which elude him.

As his name denotes, Willy is perennially childlike — his inner child has never grown up. He’s a child in an aging body. He desperately needs others for support, especially his long-suffering wife. His last name connotes a ‘low man,’ someone of low esteem consigned to the bottom rung of the social ladder. (While this popular interpretation was repudiated by Miller, it is self-evident.)

Martha Irving is Linda, Willy’s loyal and loving wife. Although her husband often treats her badly, Linda remains the passive enabler who supports his self-deception. Nonetheless, she’s the first to realize Willy is unbalanced.

Following in their father’s footsteps, Willy’s two sons take solace in illusion rather than confront reality.

Skye Brandon is Biff, the eldest son who never grows beyond the potential of high school football star. His bright promise collapses into a pile of ashes after he catches his father with another woman. He forsakes his dream of heading West to work as a farmhand in favour of pursuing his father’s dream of becoming a successful businessman. He alone struggles to gain a foothold on reality.

Jeffrey Wetsch is Happy, the youngest son who lives in the shadow of his older brother and is dismissed by his parents, whom he tries to support without ever winning their approval. He’s a womanizer and dreams of moving beyond his dead-end job as an assistant to an assistant at a local store. 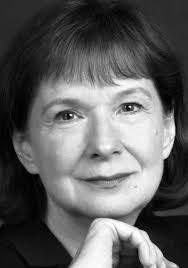 Marti Maraden, a veteran actor and director and artistic director of English Theatre for the National Arts Centre for eight years, returns to Drayton Entertainment to direct her eighth production.

Death of a Salesman continues at St. Jacobs Country Playhouse through Oct 19. Information and tickets at 519-747-7788.