When I returned from my initial trip to Blyth this season, I texted my friend with a short quip: “Saw plays about pig farming and curling. How Canadian is that, eh!”

Although the text was accurate, it didn’t reflect my true feelings about the festival I’ve been writing about and reviewing since 1984—a year more than half of my life.

Although I’ve been retired from newspaper arts reporting for three years, I continue going to the Blyth Festival because of what its plays tell me about myself as a Canadian struggling, not always successfully, to make my way in an increasingly complex world. I have weaned myself from the Stratford Festival and other theatres, but cutting myself off from Blyth would be akin to open-heart surgery on a bad-hair day. Something I’d rather not undergo.

I passed on the reprise of The Pigeon King, which has left the Blyth roost for national stages, because I reviewed its premiere last season. I hope everyone who missed the surprise critical and popular hit the first time around got a chance to see it when it opened the festival’s 44th season. 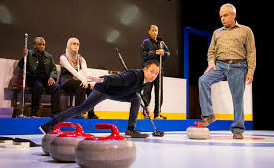 Let’s be honest, curling takes a distant backseat to hockey in the Great White North. But it reflects the pervasiveness of the Scottish influence on our history, traditions and culture.

The New Canadian Curling Club is the third dramatic work devoted to the sport with which I’m familiar. There’s W. O. Mitchell’s Black Bonspiel of Wullie MacCrimmon and Paul Gross’ cinematic homage Men with Brooms. I saw Wullie sweep his way across the Blyth stage in 1994 (I was pleased to renew acquaintance with Mitchell’s son, Orm, who taught me three English courses at Trent University).

This is Mark Crawford’s third play to premiere at Blyth, but unlike Stag and Doe and The Birds and the Bees, it switches gears from romantic comedy to social satire. In The New Canadian Curling Club Crawford uses humour to explore a serious social concern—discrimination against new immigrants. Using an ancient sport, which itself was a recreational immigrant, to examine an issue as urgent as today’s headlines is effective and persuasive. And it’s laugh-out-loud funny. Damn funny!

Portraying cultural stereotypes in today’s highly sensitized political climate is risky–despite Donald Trump’s politics of ugly divisiveness. It’s conceivable some theatregoers might find Crawford’s humour offensive. I  strongly disagree with such a negative characterization, contending instead that humour—including parody and satire—is a powerful weapon in the war against all forms of ignorance and hatred encompassing prejudice, bigotry and discrimination.

Veteran director Miles Potter, who has deep roots in the festival over many years, ensures Crawford’s social targets are right on the button. He subtly challenges the audience to confront its collective prejudices when he has the four curling wannabes shake hands with apparent opponents before matches.

The Blyth stage has been magically transformed into a curling rink, where the actors toss stones at “the house,” which is centre stage.

The curling neophytes fall under the instructional tutelage of Stuart MacPail (Lorne Kennedy), the last in a seven-generation line of local curling legends who has been reduced to arena attendant and Zamboni operator. As the main conduit through which Crawford examines his social concerns, Stuart has much to learn. A task Kennedy handles with considerable finesse.

Crawford puts flesh on the racial bones of each of the new Canadians with the kind of domestic complications that shape many families.

Following the conventions of comedy, everything ends happily ever after. En route, there’s a healthy sprinkling of obscene language more suited to a hockey dressing room, perhaps. But Crawford—to his credit—is not interested in sugar-coating his message of tolerance and understanding in the real world where “dirty words” remain the language of the streets.

It’s a testament to The New Canadian Curling Club that theatregoers put their hearts behind the struggles of these four new Canadians as they struggle courageously to carve out lives of decency and integrity in a country that is home to such a ridiculous game as curling.

The New Canadian Curling Club continues in repertory through August 23.

Blyth Festival production cast of Judith:Memories of a Pig Farmer

Of the many hundreds of Canadian literary works I have read over the past four decades, I remember Aritha Van Herk’s 1978 novel Judith with special fondness. The publisher introduced the award-winning debut with a promotion—anyone whose name matched the heroine’s could request a free copy. At the time, I was married to a Judith, so mailed away for a copy on behalf of my wife.

The promotion was nice, but unnecessary. The novel turned out to be surprisingly good.

At the time, Judith was celebrated as a “feminist” novel. Now we can enjoy the premiere of Heather Davies’ stage adaptation, Judith: Memories of a Pig Farmer, as a play of awakening consciousness—what literary critics call a Bildungsroman—without being strapped to a restrictive gender label.

Judith is a young woman who leaves the family farm—a pork operation—to move to the big city. Because she is an only child her parents plead with her to stay and take over the farm. But Judith rejects the offer and, in the process, forsakes her inheritance and legacy.

The city lights turn out to be not so bright as Judith lands a dead-end administrative job and quickly falls into the arms of her preying boss.

When her parents die in an automobile accident, she decides to spend the insurance money to return to the country and try her hand at pig farming (not on the family farm). She is 23 years old.

With her own patch of land, a dozen sows and memories of her childhood, Judith learns about herself as she rediscovers the meaning of home. In contrast to Thomas Wolfe’s assertion that you can’t go home again, Judith realizes she never really left despite the best of intentions.

Adeptly directed by Jennifer Brewin, the production is very much an ensemble achievement with the remaining cast members playing multiple roles.

Marion Day animates any stage she happens to grace. She is dynamite as Judith’s mother and, especially, Mina Stamby, the neighbour who takes the young woman under her wing.

Graham Cuthbertson doubles as Judith’s boss and one of three Stamby boys.

Daniel Roberts doubles as Judith’s father and another Stamby son.

To its benefit, the play is not straight-up narrative. Time flows between past and and present, with flashbacks that flesh out the story that enriches Judith’s struggle toward self discovery.

The text is punctuated with a couple of songs and pleasant acoustic interludes (guitar and mandolin) under the musical direction of Murray Foster.

Judith continues in repertory through August 11.

You see, now, what I meant with my original text. It doesn’t get any more Canadian. Which is why I keep returning to the Blyth Festival to nourish my own roots and keep my heart singing.