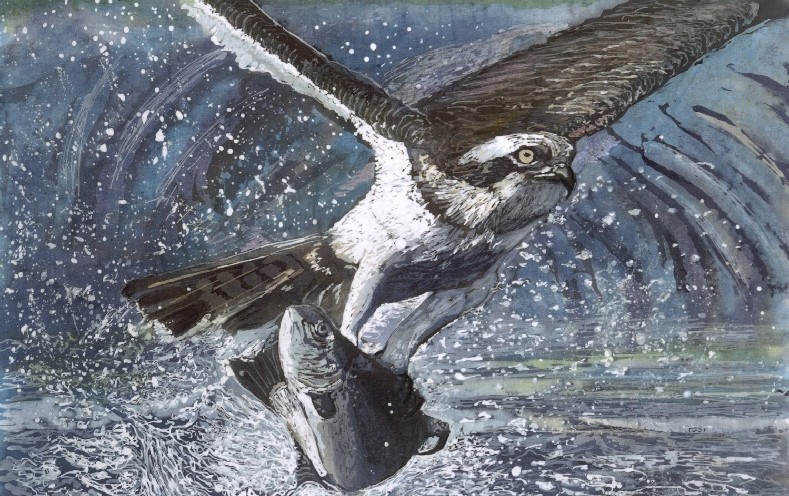 The fish that flew away

Turning and turning in the widening gyre
The falcon cannot hear the falconer;
Things fall apart; the centre cannot hold. . . .
— The Second Coming by W. B. Yeats

He was perched on a limb, high in a bank-side tree when I got to the river — immobile, intense, fierce, impressive. A confident, solitary, wilfully wild sentinel, the osprey was patiently waiting on supper. He showed little interest in me.

Before I made my first cast, I retrieved my compact, waterproof Pentax camera out of my vest and snapped a couple of pictures, using the telephoto option. I wanted to get as close to the ruthless predator as I could. He remained still, implacable. Describing him as majestic isn’t hyperbole; it’s fact.

Ospreys are unique among North American raptors for their steady diet of living fish and their ability to dive swiftly into water to snatch them. They are seen regularly soaring elegantly over tree tops while meticulously patrolling along the Grand River. The local conservation authority has built platforms on tall poles along the watercourse to house large, untidy stick nests.

These big, rangy hawks do well in the company of humans. Happily, they have rebounded following the ban on DDT. Diving ospreys are models of intense concentration, plunging head-long, their yellow eyes focused along ferocious, expectant, outstretched talons. 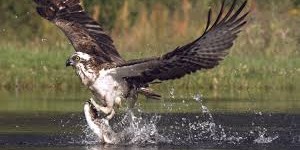 I began casting a cream-coloured Usual in pocket water in a long riffle. The Usual is a classic dry fly created by legendary Adirondack tier Fran Betters, which I had purchased earlier this year at a fly shop in Wilmington, in upstate New York. It was my first trip to the storied West Branch of the Ausable River, a place I hope to return.

It was early evening in late August; overcast, with a refreshing breeze. Temperatures had cooled over the last few days and nights, allowing water temps to drop to the mid-60s, making it safe once again to fish for brown trout in the tailwater downriver from Elora.

My angling buddy Dan and I had spent an enjoyable summer fishing for cooperative smallmouth bass between Cambridge and Paris. One memorable evening I caught 32 smallies between six and 14 inches over a couple of hours. On another outing Dan caught 28 smallies spanning the same length over a comparable period.

The constant rain — caused by the same global climate change that left drought-stricken British Columbia vulnerable to wildfire — prevented us from targeting trout in the tailwater through the prime weeks of late May and June.

I turned my attention from the handsome raptor; but I was aware he occasionally left his perch and took flight, leisurely surveying the river with his familiar high-pitched chirp, ready in a split second to take a lethal dive at unsuspecting fish.

Soon Dan arrived and I pointed out our feathered companion. Dan’s an avid birder as well as a fly fisherman and he always has his high-end Nikon digital camera hanging on his neck whenever he hits the river.

We fished for an hour or so (who’s counting?), both vaguely aware through our own casting rhythms that we were sharing the river with one of nature’s supreme anglers.

After catching a dozen pesky chubb, I finally landed a small brownie, about seven inches in length. Dan had a couple of strikes. Things were looking up for both of us.

I waded upstream a few feet and cast at some quiet water between a couple of converging currents. I got a hit. My Winston five-weight developed a sudden, throbbing arc. I was on to a good fish. I shouted to Dan, ‘I’ve got one!’

I raised my rod and began stripping line. The fish broke the surface, flashed and splashed, exposing himself momentarily, fleetingly. The battle was on.

Then, suddenly, I heard the heavy wing beat of the osprey. Out of the corner of my eye I saw him diving with speed and precision at my fish.

The opportunistic creature snatched up the brownie in his powerful talons and hightailed up river. If ospreys could smirk, I knew this smug bastard would be smirking, deeply pleased with his angling prowess.

My fly was still attached to the fish’s lip. My reel pained as my line took off in a blazing trajectory aimed at the treetops along the river bank. I feared I was going to lose by precious fly, maybe even my line as my reel continued to whine.

I jerked my rod and, fortunately, released the fly from the fish’s mouth — taking deep delight in my improved clinch knot holding. My line snapped back as my beleaguered fish rose higher and higher, firmly gripped in the osprey’s mighty talons.

The sequence of events, taking evanescent seconds to unwind, was not so much shocking as unbelievable. I was momentarily stunned, amazed more than disappointed — that feeling would come later. Dan stood down river, witnessing the whole thing, incredulous. He asked if he actually saw what he believed he had just seen. If only he had had time to snap a photo.

I’ve heard it said fishing is like love in that it’s the ones that get away that cut the deepest, that leave the wounds festering so they never completely heal. But it’s not all heartbreak.

I remember bass fishing with my university buddy Gary and my two sons, Dylan and Robin, when they were still young. Dylan caught a bass and was reeling it in when a proprietary loon decided it was lunch time and snapped the fish from my son’s floating, silver Rapala minnow.

Fifteen years later, we still talk about the brash act of piscatorial larceny whenever our conversation turns to fishing. In contrast, I’m sure he forgets the bass he actually landed long ago on Lost Lake.

I know I won’t soon forget the fish that flew away at dusk on the tailwater of the Grand River.

Postscript: The Grand River Conservation Authority (GRCA) has a link on its website to a webcam recording of an osprey nest it monitors at Belwood Lake near Fergus. The 24-hour streaming feed proved popular in its first year in 2016, attracting 19,000 visitors who watched more than 3.7 million minutes of footage between April and September. 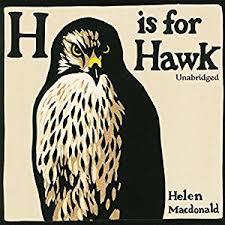 If you want to know about hawks, as well as many other things like love and grief, heartache and joy, nature and wildness and that sad, sad man, T. H. White (author of The Once and Future King, read Helen Macdonald’s astonishing and deeply affecting memoir H is for Hawk.

(Featured image Catch of the Day by Rosi Robinson)