Casting on the Rivers of Paradise

The passing of Ian Colin James  on June 29 is sad news for all fly anglers. An agricultural graduate from the University of Guelph who lived in London, Ont.,  James was a big man with a huge appetite for life.

I was privileged to spend a day with him on the Grand about a decade ago. He taught me a great deal — not always orthodox, but always BRILLIANT, to use one of his favourite words.

He had no use for tapered leaders, favouring good old, six-pound test fishing line. He laughed at fishing vests as an affectation, preferring an old canvas rucksack. He had nothing but disdain for strike indicators, which he gleefully dismissed as bobbers. He discouraged false-casting and double-hauling as the work of the fly angling devil. He scorned bead-headed nymphs in favour of traditional, soft-hackle, wet flies. Instead of using commercially made gunk to sink his wet flies, the ever resourceful iconoclast mixed a concoction of river mud and liquid detergent. No species of fish was too lowly to escape his fly, even such bottom feeders as carp. He was an innovative commercial fly tier. His Ian’s Brass Ass is an Orvis best-seller.

As well as a gifted fly angler who caught the fishing bug in his homeland before immigrating to Canada, he was an outspoken environmentalist and generous teacher. He taught the first credited course in fly fishing at a Canadian Community College — at Fanshawe in London. His public talks brimmed with jokes, not always politically correct, and were punctuated with raucous laughter. He wrote the hilarious memoir Fumbling with a Flyrod: Stories from the River. 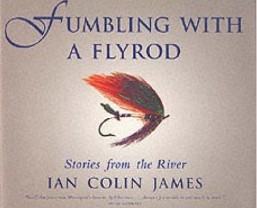 James, 55,  parlayed his larger-than-life personality into celebrity, appearing on CBC’s Rick Mercer Report, attempting heroically to teach its host the intricacies of casting a fly rod. He also appeared on The New Fly Fisher instructional TV show. He fished as he lived — walking a path all his own, in his own time, at his own pace. His like will not fish these waters again.

The former competitive swimmer-turned-bearish angler was one of — if not the first — professional guides on the Grand River Tailwater. He could effortlessly cast to his backing (I saw him do it) because he applied copious amounts of Armorall spray to his line. May he continue to cast long and straight on the Rivers of Paradise. RIP, Ian.