Tonight my bag is packed
Tomorrow I’ll walk these tracks
That will lead me across the border. . .

For what are we
Without hope in our hearts
That someday we’ll drink from God’s blessed waters. . .

And eat the fruit from the vine
I know love and fortune will be mine
Somewhere across the border. . . .
— Across the Border by Bruce Springsteen

Despite severe storm warnings, I decide to head out to the Grand River for a couple of hours after supper. With the constant rain we’ve had this summer across southwestern Ontario, conceding to inclement weather forecasts have dramatically reduced my time on the water. Not tonight; no way. Caution to the wind and all that.

It’s early September, a month I especially enjoy casting fur and feather at brown trout. I go to a spot that has been generous to my angling buddy Dan and me.

I have the river to myself in terms of people. But I have lots of companions including a few ducks, a chevron of Canada geese, a kingfisher or two, a cedar waxwing (one of my favourite birds) and two blue herons. A marten is patrolling the shoreline. My Partagas Serie D No. 4 — like a couple of pints after fishing, cigars are best enjoyed on the water — has reached the band as darkness falls. I strip in line for the last time and think about heading back to the car under the stars.

Then I see it; not once but twice. Twice.

A large fish catapults out of a pool adjacent to a riffle beneath a large willow tree 12 metres (40 feet) upriver. The picture he makes reminds me of a couple of Winslow Homer’s Adirondack watercolours — Jumping Trout and Leaping Trout. He’s hungry, undoubtedly savouring one of the cream caddis flies fluttering about.

If he’s a brownie — and why wouldn’t he be — it’s one of the largest I’ve seen with the naked eye on the Grand. I’m shaking with excitement, but hesitate to cast. The darkness is deepening. The reel seat of my Sweetgrass 5-weight bamboo rod needs attention. I don’t want to risk catastrophe.

Reluctantly, I surrender, determined to return the next day. We’ve all read or heard tales about big, territorial fish protecting their aquatic turf. I’m confident this guy wasn’t going anywhere.

The weather is cooperating. It’s the afternoon of the next day and I’m driving through Mennonite Country. Excited and expectant, I feel a bit like a pyromaniac returning to the derelict building I torched the previous night. Or maybe I’m just a predator on the hunt.

I have Bruce Springsteen on the car CD player — The Ghost of Tom Joad. I’ve had my trio of acoustic Boss albums on constant rotation for a week, since I went to the funeral of a friend who lost his battle with an especially virulent cancer.

He was 52 years of age, sports editor of the Owen Sound Sun Times, beer league goalie and enthusiastic community volunteer. He was the beloved husband of a colleague I sat across during my last decade at the Waterloo Region Record. He was dotting father to two teenage girls. And he was a Springsteen fan, as am I.

As I arrive at the river, Springsteen is soulfully meandering through Oh Shenandoah, a heartaching American folk ballad dating from the early 19th century and believed to have originated with French voyageurs.

Shenandoah, I love your daughter
Away, you rollin’ river
I’ll take her across the water
Look away, we’re bound away
Cross the wide Missouri.

I methodically get into my gear and slowly make my way to the spot. It takes wilful effort to take my time, to wade cautiously and carefully. I cross the border, leaving the mundane everyday world behind, and enter the magical world of piscatorial expectation and potential wonder.

When I arrive I tie on a cream Usual dry fly originally designed by legendary Adirondack fly tier Fran Betters. Although there’s no rise, I spot an occasional cream caddis fly fluttering about. (They always flutter about, as you might have already surmised.)

After 20 minutes or so I tie on a Possie Bugger, a nymph Steve May — a sometime professional guide and commercial tier, as well as editor of the revised and updated second edition of Fishing Ontario’s Grand River Country — recommended as one of his Versatile Fly Patterns for Ontario Waters at a recent meeting of K/W Fly Fishers. Steve introduced me to fly fishing just over a decade ago. (He adapted Better’s rough and rustic Usual pattern, which he also included as one of his versatile patterns.)

It’s a hunch. I quietly make my way upriver and begin casting down a riffle seam, allowing the fly to swing into the pool — the spot.

After a few casts — WHAM.

I set the hook. I’m ecstatic. To think, I’ve hooked the fish I came to catch. I’m the alpha predator. Me.

I play the fish and carefully lead him out of the riffle into the placid water of the pool. I have him; he’s mine. My knees are shaking. I take a deep breath. I begin thinking about my compact Pentax camera in my vest pocket. Thoughts jump to the blog I’m going to post.

‘What the hell is that,’ I blubber to no one but myself. It’s the fish I had seen the previous night. I can tell by the girth, the silhouette, the length.

Could it be? I’m far from an ichthyologist, but it looks like a walleye. A WALLEYE. I confess: I’m pleased to have accomplished what I set out to do, but the result isn’t what I expected, what I anticipated, what I wanted, what I dreamed on. 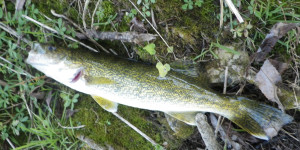 Then I start brooding — reflecting on why I enjoy fly fishing so much. Why it’s a passion. It occurs to me that in life, we too often fall into the trap of seeking perfection. We aspire to be the perfect son or daughter, the perfect spouse, the perfect father or mother, the perfect friend, the perfect employee. . . . Of course we fail. I’ve failed miserably, sometimes feeling like a car wreck in search of an accident.

In contrast, fly fishing isn’t about perfection. It’s about getting it right — at least occasionally, momentarily, fleeting as a hummingbird’s wingbeat. The right cast, with the right fly, at the right spot, at the right time. . . .

This is one of the things fly fishing shares with writing. When Ernest Hemingway, a man who knew more than a little about both writing and fishing, was asked what compelled him to rewrite the ending of A Farewell to Arms 39 times, he replied: ‘Getting the words right.’

It’s what I try to do every time I sit at the keyboard or wade in a river with fly rod in hand. It’s what my friend, Bill Walker, did. I know he’ll stay square to the shooter when the puck drops in Paradise.

Postscript: When I get home I check the Grand River Conservation Authority’s website which confirms that walleye is one of a number of species (including smallmouth bass, northern pike, carp, white sucker, bullhead and yellow perch, in addition to brown trout) that inhabit the river’s tailwater.