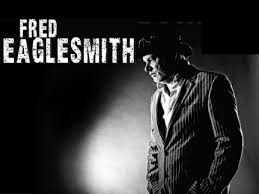 I’ve known Fred Eaglesmith for more than three decades. I fondly remember the first time I interviewed the fiercely independent artist in the kitchen of a farmhouse between Brantford and Hamilton he was sharing with his wife at the time. He had a thick blond beard and was wearing a plaid work shirt and denim overalls. We sipped cold beers as our conversation ranged far and wide over the musical landscape.

Born into a southern Ontario farm family, Eaglesmith wasn’t actually farming, but his passionate heart and fertile imagination were definitely planted deep in the soil. If memory serves, his day job was delivering plants to garden centres or flowers to florists — something like that. Meanwhile he was fighting mightily to carve out a career as a singer/songwriter, giving expression to the plight of farmers during a dark period of rural transformation wherein beleaguered family farms were foreclosed by profitable national banks and sold off to rapacious multinational agri-corporations.

Eaglesmith, who turned 59 July 9, was having a tough go of it back then. And he was pissed to the point of bitterness. Caught between the plough and the guitar, folkies complained he was too country (he referred to those who held such opinions as ‘folk fascists’). Conversely, country purists complained he was too folky. Fact is, he was a bootstep ahead of the music industry by walking the line between country and folk just as alt-country and Americana were becoming recognizable labels under the newly opened roots umbrella.

Eaglesmith has always barndanced to the rhythm of his own guitar. He has been a pioneer in the business of music as much as in the artistry of music. He maintained control of his career through highs and lows, booms and busts. He’s a survivor, having committed himself to the long haul. En route he has gained respect from the industry that initially shunned him, while securing the fierce loyalty of a faithful fan-base that happily refer to themselves as FredHeads.

Eaglesmith, who was born Frederick John Elgersma, has succeeded in a ruthless business by being a musical chameleon. He’s the artist of a thousand faces, a masked musician of multiple personae — whether farm-gate defender, rebel without a cause prowling the outskirts of town, alt-country outlaw riding an asphalt flat top in a Fairlane convertible, Texas lounge lizard with a mean streak and broken heart, postmodern bluegrass artist (the ghost of Bill Monroe), a medicine show clown (I’m using clown in the sense Shakespeare created fools) or rockabilly Holy Roller in search of redemption.

Eaglesmith is a gifted and prolific songwriter, bridging folk, country, bluegrass, acoustic blues, rural gospel and good ol’ boy rock ‘n’ roll. He has the eye and the ear of a poet. His brain is a never-ending carousel of melody — a jukebox that never quits. He writes songs with the regularity of daily constitutionals.

I’ve always held that the culture of Appalachia extends into southwestern Ontario through the Carolinian forests along the North Shore of Lake Erie. No Canadian artist of the region embodies and reflects that culture more than Eaglesmith. If you doubt me, read the North Carolinian writers Ron Rash, David Joy, Wiley Cash or Fred Chappell. The hang-dog characters inhabiting their novels and short stories seem to originate in Eaglesmith songs. Maybe that’s why he found success south of the 49th Parallel before Canadians started acknowledging his genius — repeating the same old tired Canadian story.

Eaglesmith’s blue-collar anthems and heartaching ballads of sex and death have a raw, uncompromising grit that seems very much like kitchen-sink realism. But don’t be fooled. His Everyman songs are really mythic vignettes that express universal and timeless themes in the language of common ordinary people caught up in the perplexities of life. Mustering all the truth and honesty they can, they struggle to survive this deeply flawed, imperfect, provisional world. Eaglesmith is an existentialist in cowboy boots looking for salvation in all the wrong places.

Eaglesmith’s lyrical esthetic is unapologetically masculine. He has no truck with political correctness, even though he can be intensely sensitive when writing from a female perspective. Still it’s the manly world of high-octane machines that fuel in his songs — cars and trucks, tractors and trains — as much as cigarettes and whisky, dogs and guns. Of course, men don’t hold exclusive rights to loss and regret, pain and sorrow, loneliness and grief — however poetically expressed.

Eaglesmith is a tireless and crafty promoter. Think of an itinerant snake oil salesman — with the caveat that he hawks art that really will cure whatever ails you. He’s a road-warrior who has traversed North America on both sides of the border as often as any recording artist you care to name. No town, beer joint, legion hall or picnic is too small. With the gratitude of a schoolboy receiving a nod of approval from a pretty Grade 2 teacher, Eaglesmith happily plays them all.

All but a handful of his 20 albums were recorded on his own label in home studios and either self- or co-produced or produced by longtime friend and musical compadre Scott Merritt rather than by hired technicians. The bands he has assembled over the years — beginning with childhood friend Ralph Schipper and the Flying Squirrels, through the Flathead Noodlers and Travelling Steam Show — changed as Eaglesmith’s musical personae evolved. One notable musician remained constant, a North Star in a fluid constellation, until his cruelly premature death — the late, great Willie P. Bennett. Willie P’s voice weaves its way through Eaglesmith’s soulful masterwork Tinderbox as an achingly haunting refrain.

Before retiring after 30 years as an arts writer at the Waterloo Region Record, I had the pleasure of interviewing Eaglesmith many times prior to concerts. I reviewed most of his albums and many concerts, both solo and in a band setting. It was always fun picking up where we left off the last time we talked. He has the lightning wit of a standup comic, as is abundantly evident in his shows, but he can turn serious on a dime. He always had something interesting to say. I took deep pleasure in the fact that Fred often said I understood what he was intending as an artist. I can still hear him asserting, ‘Rob, you’re one of the ones who get it.’

Whether performing solo as Fred J. Eaglesmith or accompanied by a band, the singer/songwriter has a strong following across Waterloo Region. In the early days Jennie Shantz booked annual shows in St. Jacobs. John and Wendy Tutt regularly present Eaglesmith as part of the Original Princess Cinema Live On Stage series.

Fred Kinsie, who promotes occasional music events for the sheer fun of it, hosts irregular backyard concerts, many featuring Eaglesmith. He presented the singer/songwriter in the fall of 2011 at the Detweiler Meeting House. In 2013 Eaglesmith burned up (figuratively speaking) Kinsie’s back-40 with a incendiary acoustic show. The singer/songwriter returns with an opening set by Tif Ginn. The Kinsies live on Chilligo Road, ½ km south of Kossuth Road. All FredHeads are reminded to bring lawn chairs. Beverages including water, soft drinks, beer and wine will be available.