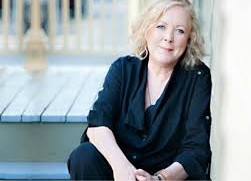 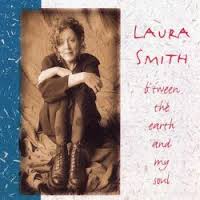 Laura Smith returns to the Registry following her auspicious Folk Night at the Registry debut in 2016. She’s joined by guitarist Paul Mills, who produced her most recent album, and multi-instrumentalist Kim Dunn.

Smith is my favourite female singer/songwriter. I love her finely crafted songs and I love her voice. It doesn’t hurt that she was born and raised in my hometown of London, Ontario. I enjoyed talking to her numerous times over three decades when I was an arts reporter at the Waterloo Region Record. I reviewed all of her albums, as well as her concerts across the region.

Winner of multiple East Coast Music awards and a Gemini — she was also  nominated for a couple of Junos — Smith has the creative soul of a Celtic minstrel. In 1984 she left prosaic London for the raw, primordial beauty of the Nova Scotian coastline, eventually finding romance in the arms of a lighthouse keeper. Her adopted home defined her as an artist and shaped her songwriting. No wonder there’s an Old World quality to her songs of yearning and loss which ebb and flow in sync with the ocean’s endlessly pulsating rhythm.

Her vocal style causes the hair on the back of my neck to spring to attention. It’s a bourbon soaked contralto, burnished by the vagaries of time, with a vibrato that polishes to a deep sheen. When you experience Smith on stage, you witness an artist who is on familiar terms with the full complexity of life: the happiness and pain, the fulfillment and loss, the joy and sorrow.

Although Smith’s Folk Night debut was restricted to a single set, it was a memorable performance — soulful and deeply moving. Two a cappella highlights came from her latest release Everything Is Moving: I Built a Boat and Safe Home, Sweet Light. She explained that the latter was written in remembrance of the passing of one of her six siblings whom she had no idea she had until recent years.

I recall elements of a review I wrote in response to a Kitchener concert a few years previously. She drew material from three albums including her self-titled 1989 debut, B’tween the Earth and My Soul (1994) and It’s a Personal Thing (1997). She released Everything Is Moving in 2013.

Her first set included I’m a Beauty. Smith possesses a disarming honesty and she introduced the autobiographical song by recalling times in her adolescence when the femininity of a tall, gangly girl was tested by the callous insensitivity of others. She said she wrote the song while cradling a six-pack of beer and sitting on the floor of a motel room in Saskatchewan during her first tour. We have all been there; if not in the details but in the existential circumstance.

The evening’s highlight was My Bonny, her best-loved and best-known song. She re-imagined the traditional ballad with contemporary lyrics that capture the original’s haunting sense of loss and bone-aching sadness.

Smith’s candour and vulnerability were evident when I interviewed to her prior to the concert. It had been a hellish few years of illness and injury including addiction to painkillers. Yet, she emerged from the long, dark tunnel of pain a stronger woman and a rejuvenated artist.

Smith has never been prolific. Songwriting has always been a struggle, which makes the gift of her song craft all the more remarkable. Her medical trials made writing even more difficult. Nonetheless, when she completed I Built a Boat, begun more than a decade earlier, she interpreted the song as a promising sign.

Smith hosts a workshop for songwriters and non-songwriters alike who dream of performing and need some guidance to cope with such obstacles as nerves or shyness. Drawing on more than 30 years’ experience, she is joined by Mills and Dunn. In addition to producing, musical directing and arranging, Dunn has worked with a Who’s Who of East Coast recording artists. Arguably Canada’s best known folk music producer, Mills produced Stan Rogers and many other Canadian artists. He is an accomplished guitarist. 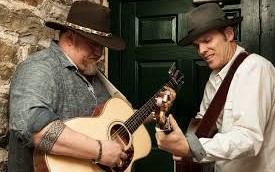 A dear friend returns to Folk Night at the Registry — with a close friend in hand. Nova Scotia’s Dave Gunning first appeared at the Registry during his first tour outside of the Maritimes. His regular returns have always been well-received. Meanwhile, Prince Edward Island native J.P. Cormier is making his debut.

These two musical compadres have been playing and writing together for more than 20 years including two cross-Canada tours in the 1990s (Gunning was Cormier’s bass player) and the 2002  Stompin’ Tom Connors tour (the music icon’s last major tour).

More recently, they’ve been showing up occassionally at each other’s concerts, sharing the stage. On days off at home in Nova Scotia’s Pictou County they often hang out together. They have a vocal blend and ability to play the guitar together comparable to brotherly bond.

And they are coming to the Registry with a brand-spanking new album, their first collaborative release. 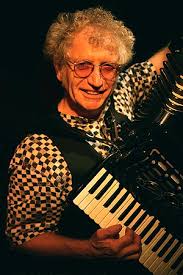 Tom Leighton returns to the Registry after hosting Sing 1 last year. He provides his own choral arrangements for selected Canadian folk songs designed to get everyone singing along — in harmony. No choir or music reading experience is necessary. He promises to teach some vocal techniques and exercises, but not at the expense of having fun. Leighton teaches at  Wexford School for the Arts as part of their music theatre team, conducting the pit band and teaching the vocal repertoire. He has led community choirs at the Blue Skies Festival and Summerfolk for several seasons and Sing at Eaglewood, a vocal music weekend.

Information & tickets for both concerts and workshops are available at www.folknight.ca