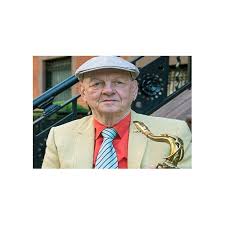 Have Sax — Will Travel

I first met John Tank in 2011 when he returned home to perform at the Uptown Waterloo Jazz Festival. Accompanied by his wife and legendary Toronto-based pianist Bernie Senensky, I was immediately struck by the tenor sax virtuoso’s warm, gracious friendliness.

Tank’s reputation certainly preceded the introduction, but regrettably it was not recognized by the festival. Born in Kitchener, Tank had been living in New York’s East Village since 1974, performing, recording and teaching. He was happy to be home, but he was clearly disappointed to have been scheduled to perform a Friday afternoon set on the Public Square Stage (in front of Uptown Waterloo Civic Square) rather than on the Main Stage.

Tank was too much of a gentleman to complain. Nonetheless, as far as I was concerned Jazzfest organizers had inadvertently snubbed one of the undeniably great jazz musicians to hail from Waterloo Region.

Tank was not only making his third festival appearance, he was introducing his latest CD, a live recording of a concert in the spring of 2010 at the Registry Theatre, appropriately titled John Tank Group: Live at the Registry Theatre. The album was Tank’s fourth, featuring Jim Vivian on bass, Ted Warren on drums and Senensky on piano. Four of its seven tracks were composed by Tank. To add salt to the wound, he confided over a light lunch and beer that it had been his best-received album to date.

As a kid in a musically supportive household, Tank tried his hand at piano and guitar before he found the saxophone. He took lessons in his hometown before studying in Toronto and eventually graduating with a degree in jazz from Boston’s prestigious Berklee College of Music. Then it was off to the Big Apple and a lengthy professional career.

Although Tank has appeared in recent years at The Jazz Room and the Perimeter Institute’s Black Hole Bistro, as well as other local music venues, his annual concerts at the Registry Theatre have become signposts for jazz lovers. He returns for the fourth time on May 27 to draw the curtain on the theatre’s 15th anniversary season with a One Night Only appearance. The concert starts at 8 pm and tickets are $27.

Billed as The Great Composers of Jazz, the program features compositions by Billy Strayhorn, Thelonious Monk and John Coltrane, among others. Tank’s All Star Jazz Quintet reads like a Who’s Who of Canadian Jazz, with Don Thompson on piano, Dave Young on bass, Terry Clarke on drums and Kevin Turcotte on trumpet (he’s the trumpet you hear from the lips of Ethan Hawke playing Chet Baker in Born to Be Blue).

If you are intrigued by how a cello fits in with a jazz quintet your curiosity will be satisfied with guest artist Ben Bolt-Martin, a local musician, teacher and conductor who recently appeared with the Grand Phil in a concert of Rachmaninoff’s Vespers. He also launched the Registry’s classics season along with cellist/banjo player George Meanwell.

Tank and company are sure to reprise the magic they created at the Registry in 2015 when he performed Giants of the Tenor Sax, a concert of compositions by sax legends Lester Young, Coleman Hawkins and Dexter Gordon, along with tenor giants Sonny Rollins, Hank Mobley, Wayne Shorter, Charles Lloyd, Joe Henderson and Coltrane, among others. The tenor saxophone became the jazz instrument in the Bebop era of mid-1940s and early 50s with Charlie ‘Bird’ Parker in the vanguard.

Tank was joined by Thompson, a three-time Juno winner, Clarke, another Juno winner, and Young, who played with Oscar Peterson for a quarter century.

Info is available online at the Registry Theatre.