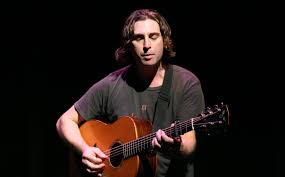 Since first appearing at the Registry Theatre in the fall of 2012, Joe Crookston has become a fan favourite. And why not? He’s not only a gifted songwriter, vocalist and guitarist, he’s a really nice guy: intelligent, passionate, witty and charming. All of these qualities come across when Crookston takes the stage.

The upstate New York recording artist, who is also a painter, made his Canadian debut when he kicked off the seventh season of Folk Night at the Registry. He was the first of a number of American singer/songwriters to be subsequently presented — including Peter Yarrow, Joe Jencks and Brother Sun, Mustard’s Retreat and John Gorka — by the popular music series.

Not surprisingly Crookston’s January 20 concert has been long sold out. But I wanted to take the opportunity of introducing him to acoustic music fans who might not be familiar with the singer/songwriter in preparation of his next visit, whenever that might be. As the old adage goes, to be forewarned is to be forearmed. Tickets will go quickly.

Crookston was excited to cross the border to perform in 2012. ‘It’s my first show, ever, in Canada,’ the affable performer confirmed at the time from his home in Ithaca. ‘I have wanted to perform in Canada for three or four years. I know Canadians love folk music. It was just a matter of connecting with the right promoters.’

Born and raised in rural Ohio, the Kent State graduate lived in Seattle for nine years before returning east in 2005. He chose Ithaca because of its vibrant traditional roots music scene encompassing old-time country, folk, bluegrass and mountain music. His career kicked into a higher gear after relocating. ‘In Seattle I had been woodshedding, writing and performing and honing my craft. When I moved east, I hit the ground running.’

In 2008 he released his sophomore album Able Baker Charlie & Dog. The album consists primarily of narrative songs, whether inspired by family members, personal experiences or people he met while touring the Finger Lakes region of New York state on a Rockefeller Foundation grant. Four songs – John Jones, Brooklyn in July, Red Rooster in the Mash Pile and Blue Tattoo – came from the Songs from the Finger Lakes project. Another song, Mending Wall, was inspired by a poem by Robert Frost.

Crookston modified his songwriting approach on his third album Darkling & the Bluebird Jubilee, released in 2011. Instead of writing songs as a third-person witness or reporter, he filtered objective material through personal experience. This approach invited listeners to bring their own experiences to songs so they can ‘own’ them.

In addition to being a talented songwriter, Crookston is an accomplished instrumentalist on acoustic and slide guitar, clawhammer banjo and fiddle — a reflection of his interest in traditional roots music. ‘I grew up listening to Hungarian polkas and I’ve always loved old-time fiddle tunes.’ he said.

Crookston was thrilled to return to Folk Night at the Registry in the fall of 2014. His debut two years earlier was an unqualified success. Folk Night founding artistic director Jack Cole observed at the time that, ‘Joe captured the audience from the opening seconds and held them spellbound throughout the show. . .  (It) was perhaps the finest concert I’ve presented in 16 years.’

Crookston’s debut opened the door for other concerts in southern Ontario including appearances in Toronto and Goderich. Following his return performance he performed in London. He now tours Canada and Ireland on a regular basis, in addition to throughout the U.S.

On this visit to southwestern Ontario, Crookston is also performing in Waterdown on January 19 at True North Gallery. The gallery is featuring original paintings by various musicians including Leonard Cohen, John Lennon, David Francey and Crookston. The multimedia evening includes a book reading by David McPherson from his new release The Legendary Horseshoe Tavern, which celebrates the 70th anniversary of Toronto’s iconic music venue.

I caught Crookston on the road outside Madison, Wis., on his way home to Ithaca, when he discussed returning to the Registry. ‘It was unbelievable. I really mean that,” he said recalling his concert debut. ‘ The audience was familiar with my music. They welcomed me as if they already knew me.’

Was he looking forward to coming back to Kitchener? You betcha. ‘I’m superexcited.’

Although Crookston is a contemporary singer/songwriter, he ’s steeped in the storytelling tradition of folk music and the communal approach to musicianship practised by old-time string bands.

He returned in 2014 not only with a new release, but his best yet. Georgia I’m Here was Crookston’s much-anticipated — and it remains his most recent. It’s very much a continuation of his previous breakthrough offering Darkling & the Bluebird Jubilee. Like the earlier album, Georgia I’m Here filters narrative songs through the prism of personal experience. However, it expands the sonic landscapes through which the stories are told. ‘It’s not so much a departure as a further exploration of sound,’ he said.

Crookston carefully assembled a group of musicians who exceeded ‘a studio band hammering out songs. The musicians were in tune with my quirky, organic way of recording which reflects my personality.’ He illustrated his point by referring to guest guitarist Peter Glanville. ‘He listens really deeply and responds intuitively to the nuances of the spirit I’m trying to convey.’ In contrast to the virtuoso approach of such traditions as bluegrass, Crookston wanted the guest musicians to adopt the communal approach of string bands. ‘We were looking for a group dynamic, with the occasional solo dropped into the mix.’

All I can say is, welcome back Joe!