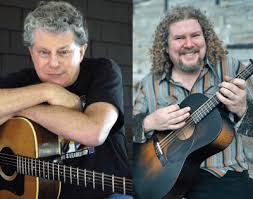 Joe Jencks and Si Kahn are ‘throw-backs’ in the best sense of the term. Since the 1970s, folk music has been eclipsed by singer/songwriters who write personal songs of joy and pain and every emotion in between. Think of James Taylor and Carol King as prime examples.

In contrast, Jencks and Kahn carry forward the tradition of political protest, social justice and spiritual awareness that encompassed early Bob Dylan, Joan Baez, Tom Paxton, Buffy Sainte Marie, Arlo Guthrie and Phil Ochs. This is music of the people rather than music of the individual.

The Folk Night appearance is in support of a brand-spanking new Jencks/Kahn collaboration. The Forgotten: Recovered Treasures from the Pen of Si Kahn, is a new Jencks’ release comprised of songs written by Kahn.

Jencks explains the project as follows: ‘Si approached me several years back with over 70 songs that he had written and never released. He asked me if I would consider singing any of them, and it evolved into a remarkable new album.’

Produced by prominent Toronto-based singer/songwriter/musician/producer Ken Whiteley and featuring ‘some amazing’ Canadian musicians, ‘these are some of my best performances yet in recorded form,’ according to Jencks. The album’s 14 previously unreleased songs ‘chronicle the lives of extraordinary people,’ Jencks confirms.

Based in Chicago, Jencks is an international singer/songwriter. From Carnegie Hall and Lincoln Center to festivals, religious communities, schools and coffee houses, Jencks has spent the last 18 years touring full time. He made two previous visits to Folk Night as part of the aforementioned acoustic folk trio Brother Sun (with Pat Wictor and Greg Greenway).

Kahn has surpassed half a century as a singer/songwriter and musician, civil rights activist and union & community organizer — all the while continuing to tour internationally. This year brought him to both the Mariposa and Vancouver festivals.

Kahn has released 18 albums to date. His most recent, Bristol Bay, was produced by Jens Kruger of the Kruger Brothers (who have made three visits to the Registry).

His songs have been translated into at least half a dozen languages and covered by an impressive list of artists bridging diverse genres including Kathy Mattea, Peggy Seeger, Planxty, Dick Gaughan and The Fureys.