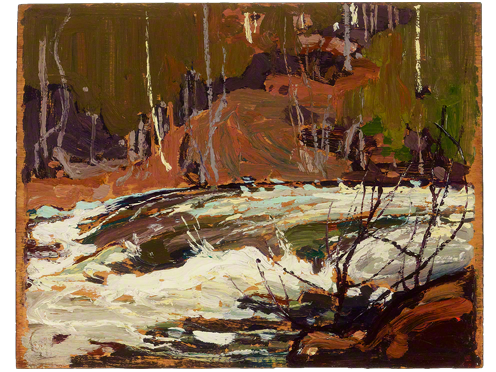 Fly anglers and writers — not to mention fly angling writers — are fascinated by the evocative relationship between music and rivers. I’m no exception.

One of my favourite fly fishing writers, W.D. Wetherell, who is also an accomplished author of novels, short stories and non-angling essays, reflects on the music of rivers in a chapter titled Symphony in Vermont River, the first volume in a trilogy of angling memoirs (including Upland Stream and and One River More).

Here are a few lyrical sound bites of what Wetherwell has to say about the music of rivers:

‘A river’s sound is nothing if not symphonic — one beautiful whole composed of scarcely less beautiful parts, each of which can be distinguished within the overmastering rhythm. The light percussive effect of pebble hitting pebble, the reedy drone of sand washing away from a bar; the brassy fanfare of spray against granite . . . they weave their way in an out of the steadier cello-like continuo of the river’s motion. A river bed is a sounding board over which the water strums  the earth, shaking molecules against other molecules until a wave is formed which — reaching a certain frequency — reacts pleasantly to our ears. This scale established, the symphony begins.’

‘A drop of water falls from a branch high upstream with a soft placing kind of note . . . solo at first, then joined by another drop further back toward the branch’s stem, then another, then a fourth, until finally the plucking become simultaneous, and the first liquid chord of the river is created — a high treble rill of sound as the merged raindrops sparkle down a grooved rock into the stream. The rain-formed current pushes a drowned branch against a boulder, then lets it spring back; pushes it, then lets it spring back, establishing a soft metronomic click from which the entire river takes its beat.’

I admire Wetherell’s careful and precise attentiveness to nature. Here’s a writer who cherishes the world around him in all its manifold abundance. Nothing escapes his eye and ear. He has the mastery of language to express his thoughts and feelings with a crystalline eloquence. And it’s obvious he loves music as much as he does nature, rivers and fly fishing.

‘The character of the music is evident right from the start. The White River, for instance, is romantic even in its tributaries — a broad sweep of sound that suggests Smetena’s Moldau. The Battenkill, running in a narrower channel, is more classical, a river composed by a Mozart or Haydn, with pure tones and an effortless harmonic impulse that carries it along.’

‘My river in its upper reaches is unmistakably baroque. It begins far from the road in a quiet wood where silence is so absolute it seems not the mere absence of noise but a creative force waiting to be trapped. The instrumentation that gathers it is the simplest — there are those raindrops forming into rills, the baby tributaries with their high, brittle bounce, the miniature falls whose notes are as clear and distinct as a harpsichord’s. With no heavy rapids to drown out their sound, the soloists retain their distinctness as the process goes on; close your eyes and you can still find the percolating drops of rain within the metallic, more ornamental notes of the falls. I listen to a Bach cantata by following one instrument or voice as it winds its way through the entirety of the piece, using it as a guide through the beautiful intricacy of sound, and I find myself listening to the upper stretches of my river in the same way.’

A river is the melodic umbilical cord — or shall I say chord? — that connects fly anglers to the immediate ecosystem beyond its banks. Fly anglers are not only immersed in the music of rivers; they are engulfed and surrounded by the stereophonic sounds of nature.

James R. Babb, former longtime  editor of Gray’s Sporting Journal and author of a quartet of fine fly fishing books (including Crosscurrents and Fly-Fishin’ Fool, Fish Won’t Let Me Sleep), titled his sophomore volume River Music. Here’s a lyrical passage in which he recalls the melodic cadences that accompany the music of rivers.

‘I’m slouched in an Adirondack chair on my office porch, tiny computer balanced across my lap, coffee steaming on the armrest, a perfect springtime symphony playing in the background: the soft bassooning of a mourning dove; the flautist burble of robins; the shrill fifing of the white-throated sparrows; the castanet cackle of tree frogs; the basso burump of bullfrogs; the washboard ratchet of green frogs; the stuttering timpani roll of a grouse calling to the neighbour’s chugging John Deere; the flip-flip-slip of little trout chasing speckle-winged mayflies in the pond. Underpinning these soloists is a hydraulic string section endlessly gnawing away at granite, macerating fallen trees, dodging and weaving around boulders newly rearranged by the winter’s ice — a string section that never stops playing and never repeats the same passage, always making music, always rewriting the score. It’s the music of a river, or at least a brook, rushing along a hundred yards from my chair . . . .’

In Crosscurrents Babb rhapsodizes about the music of rivers while asserting his preference for wet wading over wearing synthetic waders — confirming that hearing music lies in the ear of the beholder:

‘Distanced from the current by the thin fabric of light-weight trousers, I feel what those great canoe men, the French-Canadian voyageurs, called la fil d’eau, the thread of the water — rhythmic variations in hydraulic pressure: water music, to put a Handel on it. In wild rapids it thrums against my legs like Wagnerian low brass; in majestic pools it becomes ponderously Purcellian; in endless pocket water it is a rollicking version of the Grateful Dead’s ‘Ripple’ — a tangible musical thread connecting me to the world of trout in ways I cannot explain. In waders, the beat comes through muffled and dull, like one of those wheeled woofers Dopplering the bass clef of music you’re glad you don’t recognize.’

I was reminded of the sympathetic link between music and rivers one inspiring afternoon in early September when I attended a noon-hour concert and then spent the rest of the afternoon fly fishing on a pastoral stretch of the Grand River west of Elora.

The concert, titled Earth Peace, featured a program of instrumental and choral music which incorporated the life narratives of various women. The music was composed by Carol Ann Weaver, a composer, pianist and professor emerita at Conrad Grebel University College at the University of Waterloo. The concert, held in commemoration of the Mennonite-affiliated college’s annual Peace Week celebrations, took place in its chapel.

The concert was performed by a chamber ensemble made up of members of the Renaissance Singers, a community choir founded in Waterloo Region in 1972 and currently directed by Gordon Burnett. My partner Lois is an alto in the choir and our good friend Jay Baker is a tenor. The choir was augmented by the Factory Arts String Quartet (Andrew Chung and Julie Baumgartel on violin, Jody Davenport on viola and Ben Bolt-Martin on cello), solo soprano Stephanie Kramer and readers Jennifer Ball, Carol Penner and the composer.

Carol Ann has spent a good deal of time in Africa and much of her music is influenced by that continent’s rich musical traditions. Earth Peace was compiled and composed in South Africa and Nambia over 2015 and 2016. The work is best described as a dialogue between humanity and the natural world that touches on such urgent global issues as peace, social justice and responsible environmental stewardship.

The lovely choral pieces, with such titles as Gloria, Laudamus, Nona Nobis Pacem, Kyrie, Lament and Peace to Our Planet, are drawn for the most part from the Latin Mass, with lyrics written by the composer. The instrumental pieces, with such titles as Hartebeest, Wild Dog Dervish, East Timor, Springbok Lamb Ode and Ring Out Peace, are short, poignant reflections in response to the choral text. The narratives that punctuate the music span a range of experience and emotion from conflict and pain, to resolution and joy. 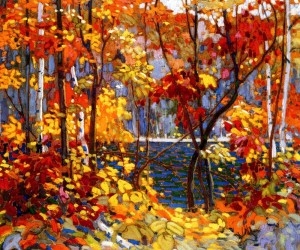 The Pool by Tom Thomson

Later, as I was wading thigh deep in the Grand with the music of its rushing current sweeping in and around and over my senses, I began reflecting on Earth Peace which I interpreted as a beautiful blend of sacred and secular music that presented humanity and nature as two sides of the same spiritual wafer.

I use the word ‘wafer’ deliberately, referring to the thin disk of unleavened bread used in the Eucharist. I don’t mean to come off as pagan, but when I stand in a river casting my fly rod as gracefully as I am able, I feel as intimately connected to the essence of things as I ever do. It’s as though I’m taking communion.

Although my altar is the world of nature, I’m not worshipping the river and the fish, the insects, the birds and the animals, the rocks, the trees and the plants. Rather, I’m worshipping the Creator who is immanent and made manifest through the natural world. I feel more spiritually alive on a river than I do in a church.

If this sounds sacrilegious, I can only say it’s how my Celtic ancestors viewed nature and the Creator. Even after Christianity invaded and conquered the Celtic world, my distant ancestors continued reading from the sacred Book of Nature as they began reading from the Gospels.

It’s while standing in a river, waving my bamboo wand harvested from distant China and made by dedicated craftsmen, that I feel most at home praying and expressing my deepest gratitude for the wonders of Creation. This is where I share William Blake’s exquisite assertion that, ‘every thing that lives is Holy.’

As someone who has been studying literature for many more years than he has been fly fishing, I can’t stand in a river, casting an artificial fly, without thinking of rivers figuratively as well as literally, metaphorically as well as experientially.

For me, rivers represent the continuum of life. It’s where the seen and unseen, the known and unknown, meet on the surface of Mystery. It’s where I experience the profound paradox of being most at peace with myself and most at peace in my human community.

For me, the music of rivers is the music of peace. I believe peace is impossible in a world where the myriad splendours of Nature continue to be ravaged by a wicked conspiracy of willful neglect and arrogant disregard. Humanity will not make peace among its diverse global peoples until it makes peace with Nature.

I trust this is what Carol Ann is getting at with her emotionally and spiritually resonant Earth Peace. It’s what I prayed for on that beautiful September afternoon as I cast by line on the water in time with the sonic backdrop of river music.

Information on the Noon Hour concerts and Ensemble concerts presented by the University of Waterloo Music Department is available on line.