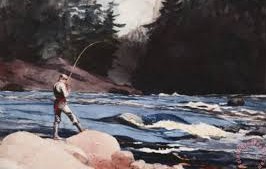 Like most kids, I grew up associating September with new beginnings. From elementary through high school and from university through graduate school, the month was the threshold we crossed to a new year — with all the excitement and expectation that passage entails.

As an arts reporter on daily newspapers for more than three decades, September marked the beginning of a bustling autumn of entertainment — the busiest period on the arts calendar. As a teacher, my partner Lois viewed the ninth month as a return to work in the classroom.

September changed when I took up fly fishing. It became associated with endings — the closing of the inland trout season in southwestern Ontario to be precise. As a result, the month became complicated, a bittersweet time of reflection and anticipation when past and future are embraced by the present.

Looking back, this season past was both fulfilling and rewarding. In early May Lois joined me on a pastoral stretch of the Grand River, where she caught a trio of brown trout — her first trout with a fly rod. She had caught her first bass on the fly a couple of years previously.

Our pair of adorable Labradoodle siblings, Abby and Mandy, watched attentively from the bank. It was their first afternoon of fishing and they obviously enjoyed the outing immensely. (By the way, our ‘girls’ really are adorable — everyone says so.)

In late May I joined my fly fishing buddy Dan Kennaley and his brother Martin in the Catskills for 10 glorious days. Casting a line on hallowed rivers in the cradle of North American fly fishing among the friendly ghosts of fur & feather was thrilling.

In mid-June I was joined by Gary Bowen — a university pal and lifelong outdoorsman who reintroduced me to fishing 15 years ago — on my favourite stretch of picturesque water on the Beatty Saugeen. 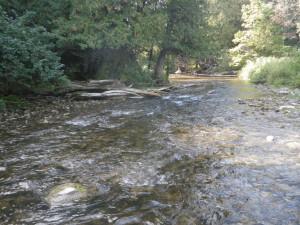 Earthly paradise on the Beatty Saugeen

Before making my last cast of the season I was already looking ahead seven months to the last weekend of April when the inland trout season opens in this part of the world after a bitterly long winter. It’s always a bitterly long winter irrespective of the weather we endure. The best thing about winter is that it gives me — an unapologetic armchair angler — lots of time to savour fly fishing literature, with a dram of single malt at my side to wash the words down.

I’m also eagerly looking forward to making my first trip to the Adirondacks late next spring with Dan, Martin and perhaps a couple of other fly fishing friends. I’m keen to fish such storied waters as the Ausable and the Battenkill, in addition to visiting the American Museum of Fly Fishing.

But I don’t want to get ahead of myself. It’s twilight three days before season’s end and I’m on the tailwater of the Grand between Fergus and Elora casting at wary trout with Dan doing the same upriver. He took the day off work and put out a call among a close circle of fly fishermen to see whether anyone else was available. Being retired, I was free and motivated. I had planned going out anyway, but the prospects of sharing it with a pal put polish on the reel.

We decided to head up to the Beatty on, you guessed it, my favourite stretch of picturesque river, no wider than a large stream, that meanders through private property. Dan and a tiny group of fly fishing friends gained permission to fish this earthly paradise 20 years ago. It remains our secret place.

It was a perfect September day, sunny with occasional cloud cover and temperatures in the low 70s. It had rained the previous day and, as we later discovered, it rained the following day.

We were brimming with anticipation; for this stretch of river has always been generous with its diverse population of rainbows, browns and, most special of all, wild specks.

The river was low and clear, which we knew would be challenging. But we didn’t expect to catch so few trout. Dan caught three and I caught two — all small rainbows in the seven-inch range. We didn’t see much in the way of bugs and the lack of fish might have been the result of the water conditions combined with the lack of hatches. But we shared deeper worries.

It had been an unseasonably hot August, with prolonged periods of remorselessly high temperatures without relief, which brought fly angling in this part of Ontario to a halt. The fact that we were catching untold numbers of pesky chub and shiners in pools usually inhabited by trout suggested that the summer weather had taken its toll on the trout population.

Talking about the situation streamside, we reasoned — albeit optimistically — that the trout would recover by next spring as they have in the past, irrespective of the severity of the weather. The river is not heavily fished and the lack of angling pressure was certainly beneficial.

It so happens I had been reading Upland Stream, the second volume in a trilogy of superb books (along with Vermont River and One More River) devoted to fly fishing written by W.D. Wetherell, a fine novelist and short story writer as well as an essayist. Subtitled Notes on the Fishing Passion, the title chapter contains Wetherell’s reflections on a threatened stream he cherishes. The situation Dan and I faced on the Beatty reminded me of Wetherell’s poetically dire rumination. Although Upland Stream was published in 1991, his words ring true, if not truer, today:

‘This will come as no surprise. Here in the last decade of the Twentieth Century it has become a given that something beautiful is something threatened. A beautiful marriage, a beautiful custom, a beautiful place. We cannot admire any of these without hearing a meter in the background ticking off borrowed time. If that something is remote, fragile and cherished, then it is doomed ever more. . . Our century has extracted its share of payment over the years, payments social, political and environmental, but not yet the full amount. The day of reckoning is approaching, and before it, like a glacial moraine, comes the huge debris of extinction, this heavy, pervasive sense of doom.’

This gloomy passage might seem hyperbolically pessimistic — with one caveat. If the apparently unhealthy condition of the Beatty is an integral part of a natural climatic cycle, all’s well. There’s no cause for concern. Optimism is not misplaced. However, if the extreme weather we suffered in August is the result of climate change caused by pollution and other environmentally destructive agents, Wetherell’s reflection is an urgently cautious warning.

Dan suggested we head down to the Grand and fish a favourite stretch which has been kind to us over the last couple of years. We were on the river with about an hour of fading light to spare. In contrast to the Beatty, the Grand was a little high, the result of a discharge from the Shand Dam at Belwood Lake after the previous day’s rainfall.

We were both casting the Isonychia comparaduns (tied beautifully by Dan) we used on the Beatty. We were prepared to change to a small caddis pattern had a hatch emerged — which it didn’t, unlike a few nights previously when Dan had squeezed out a couple of hours on the water.

Dan and I had no nibbles, let alone takes. He was walking towards me on his way downriver to our cars when I made my last cast.

‘Shit!’ I got a pounding strike. ‘I got a hit,’ I shouted, even though Dan didn’t hear me. I didn’t see it, but I knew it was a big fish by the heavy pull on my double-taper line and the way my 5-weight, split-cane Sweetgrass rod arced.

As a fleeting few seconds flashed by, my thoughts were reeling faster than my line retrieval: this feels like the biggest brownie I’ve ever caught on the Grand (which would put it in excess of 15 inches); Dan is a couple of hundred feet (80 metres) away with his Nikon digital camera to snap a trophy shot. I could even see the photograph accompanying this essay and mounted in all its glory on the wall of our home study. Wow.

I was ecstatic. Past and future vanished. I was dancing in the moment, pirouetting in the present. I started breathing faster as my body began trembling.

Because the fish was so heavy I decided to give my line an extra yank to make sure the hook was set. That was my mistake!

I pulled the hook right out of the monster’s mouth. Talk about counting your fish before it’s landed.

My joy vanished as suddenly as it arose. The disappointment was palpable; its acrid taste stained my mouth. I wanted to spit. Or maybe weep.

Dan commiserated like a true angling buddy — empathy should be in every fly angler’s vest — over a pint of chilled draught in a local pub. We decided to celebrate the closing of trout season with a delicious plate of fish (two pieces of Atlantic cod, thank you very much) and chips served on newspaper as in Merrie Olde England.

It’s often been said that fly fishing isn’t primarily about catching fish. Sometimes this notion is acorn-hard to accept. How else do you explain my agonizing night of restlessness, as I repeatedly revisited the trout that got away, despite retiring to bed bone-weary.

With this in mind, I turned my thoughts to what lesson I could take from getting a hit, but not catching the fish. I began thinking about the precariousness, provisionality and impermanence of existence: vigorous health, good fortune, lasting marriage, enduring friends, job till retirement. The list is long. And few of us — whether or not we fish with fur & feather — have not at one time or another held in our hands shards of the porcelain-fragility of life.

Fly anglers can take heart; there’s always next season. Everyone should be so fortunate.