I remember my first trip to Drayton in the green days of summer, 1991.

I had never visited the tiny, nondescript, rural crossroads before. I was not on an agricultural assignment, as one might expect. My mission was to review the inaugural production by a new theatrical venture.

Yes, that’s right, a new theatre in, of all places, Drayton! Who would’ve thunk it possible?

That first summer, the Drayton Festival, as it was then called, staged three productions over nine weeks. Its budget was modest, reflected in its tawdry sets and costumes. But the fledgling theatre had spunk. It didn’t take long to raise eyebrows in the Canadian theatre community by completely selling out its 1993 and ’94 seasons. By 1996 its season expanded to 21 weeks.

The theatrical juggernaut, now known as Drayton Entertainment, is one of the great success stories in Canadian theatre. Its tentacles reach across southwestern Ontario with Huron County Playhouse and Playhouse II in Grand Bend, King’s Wharf Theatre in Penetanguishene, Schoolhouse Theatre in St. Jacobs, St. Jacobs Country Playhouse in Waterloo and Dunfield Theatre in Cambridge, in addition to Drayton Festival Theatre.

All this falls under the visionary eye of founding artistic director Alex Mustakas, the modest, down-to-earth wunderkind who honed his thespian skills with KW Musical Productions and the local chapter of the Gilbert & Sullivan Society before graduating with a degree in arts administration in Merrie Olde England and heading off to the festival Anne built in Charlottetown.

Drayton never made large claims for itself. Its mandate was always to entertain with its theatrical fare, featuring a steady diet of musicals, popular dramas and light comedies, augmented occasionally by a heavier meal. 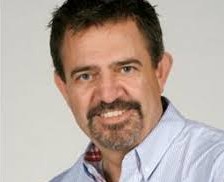 I remember talking to Mustakas when, in response to pretentious claims made by a now-defunct Kitchener-based theatre company, he defiantly declared that Drayton produced ‘non-necessary’ theatre. If you want to point to one thing that has secured Drayton’s success, it’s applying artistic standards to light entertainment.

Yes, it’s the kind of theatre that makes reviewers and critics cringe. But common, everyday audiences not only eat it up — despite its high-calorie, low nutritional value — they beg for more.

I covered the festival for its first decade or so, then management fiat at the Waterloo Region Record assigned the festival to other entertainment writers.

After retiring recently, I’m returning to Drayton Entertainment to ‘cast a cold eye’ (with thanks to Mr. Yeats) on select productions. My reintroduction was a high-octane, propulsive offering of the naughty musical Chicago at St. Jacob’s Playhouse.

So it’s back to where it all began to catch Norm Foster’s Hilda’s Yard, which joins a couple of other Foster plays on this season’s playbill. In March The Last Resort (co-written with Leslie Arden) hit the boards in St. Jacobs, while  Looking preceded Hilda’s Yard in Drayton.

There is a reason Foster is Canada’s most-produced playwright. Like his American doppelgänger Neil Simon, Foster entertains by serving large dollops of humour on the plates of people hungry for laughter. This is the kind of laughter that allows escape for a couple of hours from cares, woes and deeper sorrows.

As such, both playwrights have found a congenial home at Drayton Entertainment over the last quarter century.

Now let’s drop in on Hilda in her backyard. It’s September 1956, a year after James Dean crashed into legend after taking that fatal ride in his sporty convertible on a lonely, desert highway.

Hilda and Sam Fluck are beside themselves with joy, after emptying their familial nest. Sam plans to celebrate by taking a couple of hours off work to purchase a new 21-inch, console Zenith television set.

Hilda and Sam’s plan is turned topsy turvy when their two grown children unexpectedly return to the nest. Both are running scared.

Gary is a 33-year-old, Second World War veteran who delivers pizzas by bicycle. He’s running from a bookie because after being fired, he’s unable to cover a bet on the ponies.

His sister Janey is a 30-year-old housewife, running from her husband, a fastidious bully who insists she do housework which includes extricating hair from the shower drain.

As if the return of the kids isn’t bad enough, Hilda and Sam receive a couple of uninvited houseguests. Gary’s girlfriend of two weeks, a trombone player named Bobbi, shows up, along with the bookie who goes by the handle of Beverly Woytowich.

To say more about plot would spoil the fun. Foster achieves his customary laugh per minute. Needless to say, order is restored after a chaotic day in the life of the Flucks thanks to machinations orchestrated by our heroine Hilda.

Foster draws deep from the well nostalgia, referencing such TV shows as Gunsmoke (once called Sunstroke), Ozzie and Harriet and The George Burns and Gracie Allen Show). Beverly looks like a Henry Winkler ‘The Fonz’ wannabe from Happy Days.

Designer Ivan Bozic nails the nostalgia with his naturalistic set, featuring the back of a bungalow with robin’s egg blue siding and white trim, concrete porch with wrought iron railings beneath an aluminum awning, charcoal barbecue, cedar fence and telescopic clothes line.

He gets solid, naturalistic performances from Patti Allan as Hilda and longtime Theatre Orangeville artistic director David Nairn as Sam. The two veterans anchor the comedy with authority, never missing a beat or a blink.

Not so much for the younger characters.

For some unknown reason both Alan Kliffier as Gary and Mairi Babb as Janey act half their age, resembling hysterical teenagers more than thirtysomething adults.

I know from watching my own two sons that siblings often revert to childish behaviour when together. We also know Gary and Janey are a bit emotionally stunted; but really, this is overkill in the extreme, which creates a credibility gap in the production.

Similarly Emma Slipp as the tough-talking beatnik musician Bobbi and Brad Austin as the sweet-talking thug Beverly are forced to go over the top, turning character into caricature.

Du Mez would do better showing more faith in Foster’s writing and character development. Let the playwright do the talking. Foster knows what he’s doing, his characters do not need vaudevillian embellishment. This is comedy, not farce.

Foster is to blame for the other annoyance. Hilda often engages in conversations with a back yard neighbour we never see. There’s nothing wrong with this, after all it allows Foster to get in a couple of good one-liners. But theatregoers don’t need to hear Hilda repeat things we already know from witnessing them ourselves.

NOTE: I had no idea Drayton had become the ice cream capital of Wellington County, boasting three venues selling different brand-names, in addition to the premium ice cream available during the festival’s prolonged intermissions.