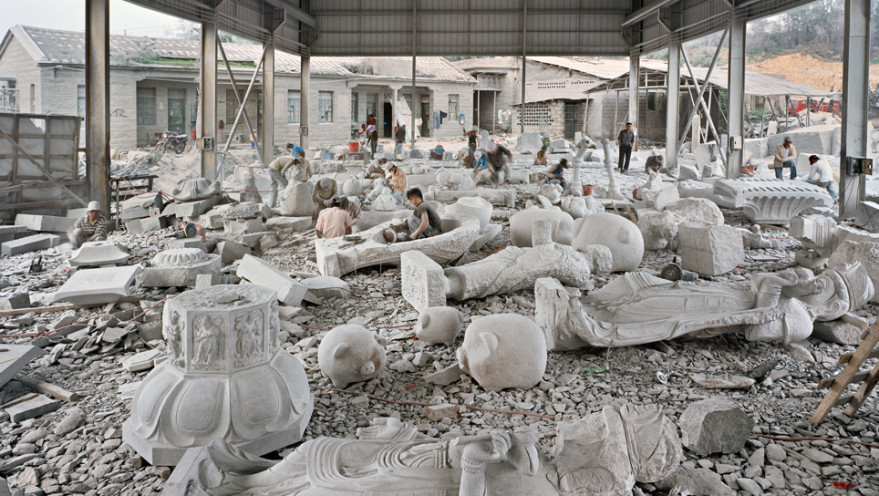 Where man is not, Nature is barren
— William Blake

Men dig tons of earth
to find an ounce of gold

When I first came eye-to-eye with Edward Burtynsky’s monumental photographs in 2002 I was reminded of Heraclitus, that wise ancient who remains as urgently relevant today as he did in late 6th century BCE Greece.

At the same time I was reminded of William Blake, the English Romantic poet whose Marriage of Heaven and Hell embodied and enacted Burtynsky’s visionary aesthetic. Blake’s reference to ‘dark Satanic Mills’ in his prophetic poem Jerusalem anticipated Burtynsky’s Manufactured Landscapes. (The latter, of course, is a reference to Jennifer Baichwal’s 2006 documentary film about the photographer.)

Long before Burtynsky became Canada’s most acclaimed photographer, the Kitchener-Waterloo Art Gallery organized his first solo public exhibition, titled Earthworks – Breaking Ground. He has never forgotten the gesture. In appreciation of the 1985 show, the St.Catharines-born, Toronto-based photographer gave the gallery 53 large-scale colour photographs from various series produced between 1981 and 2001.

The generous gift received its first comprehensive showing at the gallery in December 2002. Its significance was confirmed when four works were loaned to the National Gallery of Canada for a retrospective on the photographer, who was 47 years old at the time.

Turns out Burtynsky is an artist who keeps on giving — at least concerning KWAG. In late 2014 he gave the gallery 40 additional works, selected from various series spanning 1999 through 2007. The total gift of 93 works is second in terms of quantity only to the National Gallery’s collection. ‘It’s pretty staggering in size,’ acknowledges Crystal Mowry, the gallery’s senior curator.

Thirty-two  chromogenic colour prints are on view through January 11 under the title of Edward Burtynsky: Infinite Change. I highly recommend the exhibition. It’s a must-see.

Confronting more of Burtynsky’s work is a stunning, evocative, disturbing, challenging, exhilarating experience as we accompany the photographer circumnavigating the planet from Canada and the U.S. to Spain, Australia and China, in addition to the Gulf of Mexico.

In most works the industrial landscapes are recognizable; in others the landscapes have been formally reimagined to their constituent geometric shapes. Pivot Irrigation #21, High Plains, Texas Panhandle, USA is a gorgeous rust-coloured abstract. Similarly Dryland Farming #24, Monegros County, Aragon, Spain is a multicoloured juxtaposition of asymmetrical shapes.

Most of Burtynsky’s industrial landscapes don’t make newspaper headlines or nightly newscasts. Oil Spill #4, Skimming Boat, Near Ground Zero, Gulf of Mexico, June 24, 2010 is an exception. Its blue, luminescent stain, resembling an enormous crab crawling on the surface of a cool grey ocean, possesses a terrible beauty aligned with death.

After reacquainting myself with Burtynsky’s work I reread my review of the 2002 KWAG exhibition. I was surprised and gratified that my initial observations remain sound today. Moreover, I was delighted how much Burtynsky’s own words reflect the judgments I advanced in the earlier review.

Here are the photographer’s words which are displayed on the gallery wall to introduce the exhibition:

‘These images are meant as metaphors to the dilemma of our modern existence: they search for a dialogue between attraction & repulsion, seduction and fear. We are drawn by desire — a chance at good living yet we are consciously or unconsciously aware that the world is suffering from our success. Our dependence on nature to provide the materials for our consumption and our concern for the health of the planet sets us into an uneasy contradiction. For me, these images function as reflecting pools of our time.’

When I reviewed the exhibition for the Waterloo Region Record Burtynsky had spent the previous two decades documenting the troubled, and troubling, clash between humanity and nature from a perspective uniquely his own. At a time when the relationship between technology and ecology had been not only controversial but volatile, Burtynsky followed a path less travelled, eschewing advocacy for attentive documentation.

Here, then, is the review in slightly altered form:

In his art Burtynsky has taken the more difficult artistic path by refusing to be drawn into the moral conflict between conservation and exploitation. This conflict is more than preservation pitted against degradation. Rather than record a synthesis, Burtynsky’s photographs hold this crucial dialectic in dynamic aesthetic tension.

In so doing, he has established a unique niche for his art. And this is no mean achievement, considering so much is at stake — not the least of which is the future of this fragile, sacred planet and its sorry inhabitants (when it comes to environmental exploitation and degradation).

From the strain
of binding opposites
comes harmony
— Heraclitus

His uncompromising photographs force viewers to confront in a direct and immediate way industrial processes they might otherwise ignore. Fact is, the technological conveniences we take for granted as part of prosperous global economies come at the expense of the environment.

Oil Refineries #7, Oakville, Ontario places viewers inside the interior of a refinery. Similarly, Carrara Marble Quarries #4, Carrara, Italy places viewers inside a marble quarry. Not only are these sites associated with ecological devastation, they are viewed as repulsive assaults on the senses — ugly by standards of orthodox beauty.

Burtynsky never glamorizes or glorifies these sites of planetary devastation or the industrial activities that take place in them. In contrast to Hamilton photographer James Williams, who dignifies labour through heroic portraits of steelworkers, Burtynsky’s images present a terrifying postmodern ambiguity by challenging notions of conventional beauty, which often have more to do with taste, fashion and cliche than with any permanent or universal aesthetic ideals.

Anyone with eyes to see cannot deny the compelling composition and visual splendour — achieved by blood-red contrasted against deep, dark green — of Nickel Tailings #31, Sudbury, Ontario. Ditto for the rich texture conveyed by Ferrous Bushling #8, Hamilton, Ontario or the layers of colour and arresting sense of depth conveyed by Makrana Marble Quarries #6, Rajastan, India.

Without contraries
is no progression
—  William Blake

The desire to impose order on chaos is an ancient and perennially recurring artistic impulse. In contrast, Burtynsky documents the order that is contained within chaos. But, while his photographs record, they should not be misconstrued as merely documentary.

They are more than records of what appear through the viewfinder of a camera; rather there’ s formal deliberation. Likewise, content is neither haphazard nor accidental. In the process, Burtynsky produces morally challenging art that raises difficult questions without offering easy answers.

Although he might find beauty in unexpected places, this doesn’t mean he approves of what he details. But judgment and condemnation are left to others. Some viewers might see this as ethical fence-sitting — art for art’s sake taken to a perverse extreme at a time of global crisis.

Others might see this as an affirmation of art’s role in leading the charge to change the course of complex and difficult times before it’s too late; to hold ‘a mirror up to nature’ (as Shakespeare observes in Hamlet) as the ecological clock ticks toward ruination.

Edward Burtynsky leaves it to the eye of the beholder to assess this monumental legacy of industrialism, commercialism, urbanization and consumption — the Dark Satanic Mills.