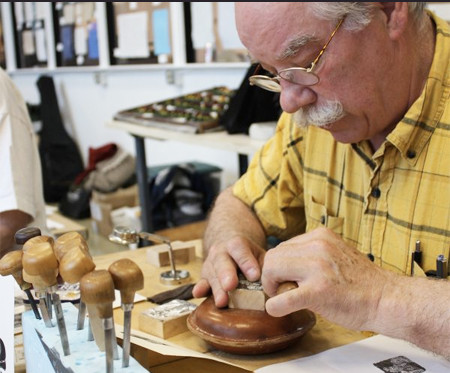 Carving Towards the Light

The painter/printmaker/book maker and I also share deep appreciation of a handful of writers including Canadians W.O. Mitchell, Timothy Findley and James Reaney, in addition to American agrarian poet/essayist/fiction writer Wendell Berry. Bates kickstarted his commercial career in art by designing cartoons and graphics for newspapers — where I toiled under deadline pressure for four decades. Lastly, we share a passion for fly fishing. One of my prized artworks is a double-image engraving of a fly angler landing a fish positioned above a close-up of an artificial fly. 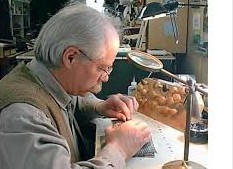 I first met Bates in the winter of 2001. I interviewed him at Joseph Schneider Haus, the Kitchener museum where he was artist-in-residence. I later visited him at his storefront gallery/studio located on the main street in Clifford, Ontario. And we have communicated by email through succeeding years. I’m waiting for him to complete a wordless storybook devoted to fly fishing he’s been promising for a decade.

My initial feature on Bates started by asserting that he wanted to be a painter, but fate had other plans. Born in the Yukon in 1951 (the same year I was born), he grew up in small towns in British Columbia and on the prairies. He has been an artist since 1977.

After studying painting and printmaking (specializing in Japanese woodcut) at Mount Allison University, he moved to Hamilton in 1980. He carried on painting, but a Christmas present altered the course of his career. It was a set of wood engraving tools.

‘They looked like an elegant set of silverware,’ Bates recalled during a pleasantly wide-ranging chat. He began experimenting with wood engraving, a meticulously demanding form of relief engraving similar to woodcut developed in the late 18th century and associated with book illustration throughout the 19th and early 20th centuries. ‘Working on wood intrigued me,’ he confirmed with a sense of wonder still in his voice.

Then a series of reminiscences and events turned avocation into vocation. He remembered an exhibition of woodcuts by Alistair Bell he saw when he was in high school in Kamloops, B.C. Even earlier, he remembered his mother’s set of illustrated books of Jane Eyre and Wuthering Heights he thumbed through when he was sick as a child. Then he visited McMaster University’s library, which houses a fine collection of books about wood engraving.

Finally he visited Gerard Brender a Brandis, a senior wood engraver living in Stratford who gave him support and encouragement. ‘Gerry was so sweet, he was so generous with his knowledge,’ Bates recalled. ‘Meeting him completed the loop.’ (I have met Brandis and ‘sweet’ is the perfect word to describe the artist.)

Fate continued to intervene in an encouragingly positive way. A friend told Bates about an old press that could be purchased for a reasonable price. Meanwhile, another friend offered Bates studio space, where he subsequently remained until he moved from Hamilton to Clifford, Ont. in the spring of 1999.

The press and studio, coupled with his increasing skills, enabled Bates to open West Meadow Press in 1984. Operating his own press has allowed him to supplement his freelance illustration and engraving work with publication of high-end, collector-quality, limited-edition books and portfolios.

Although his private-press editions might be closest to his heart, he pays the bills through commissioned work for advertising and trade publishers, both small (Porcupine’s Quill) and large (Penguin, HarperCollins and McClelland & Stewart). 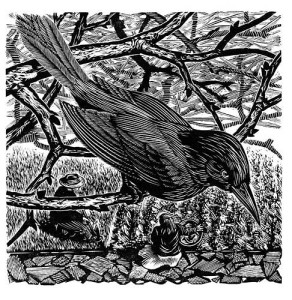 As well, Porcupine’s Quill has published The Point of the Graver, a handsome collection of Bates’ work with accompanying biographical notes. The mid-career retrospective exhibition of more than 40 wood engravings at Joseph Schneider Haus when he was artist-in-residence offered a representative sampling of Bates’ work.

The exhibition also included a display of ‘tools of the trade,’ consisting of a small vertical letter press from his printshop, a selection of gravers (engraving tools), end-grain maple blocks and metal type in a composing stick.

The exhibition title, Working Toward the Light, evoked the image of the engraver carving away from the highly polished end-grain maple portions of wood that are subsequently printed as white, thus ‘working toward the light.’ Bates himself has always liked referring to wood engraving as ‘drawing with light.’

The works confirmed his sympathetic affinity with the tradition of English private-press wood engraving popularized at the turn of the last century by William Morris and his followers in the Arts and Crafts Movement.

They encompassed a range of conventional artistic subject matter (still life, landscape, figure studies, genre). Many were either inspired by, or were in response to, literary works and themes, spanning mythological and classical sources to contemporary poetry and works of both fiction and non-fiction.

Many works reflected Bates’ own personality, especially his wit and humour, and his interests in music and musicians, nature and rural life, animals and birds, erotica and period costumes, the circus and commedia dell’arte. (PERSONAL NOTE: I wish there were more works devoted to fly fishing.)

The exhibition highlights were engravings for a limited-edition volume devoted to poet James Reaney’s To the Avon River above Stratford, Canada and for a limited-edition portfolio of companion engravings to poems by the celebrated American writer Wendell Berry, titled Roots to the Earth. (Bates later travelled to Kentucky to meet the acclaimed agrarian writer; they have collaborated on subsequent literary projects.)

It’s difficult to view Bates’ engravings without being impressed by his artistry — a robust blend of vision, sensitivity and craftsmanship. He is a master. By breathing new life into an apparently outmoded form of visual expression, Bates is doing his share to ensure the survival of a traditional engraving process into the post-modern, post-technological era. Call it Wood Engraving for the Information Age.

Although I know Bates best as a master wood engraver, a trip to his studio and printery reveals an artist with a broader brush encompassing paintings in oils, acrylic and gouache; drawings; etchings; glass engravings; handmade books; and letterpress work.

His work is represented in public collections including The Art Gallery of Hamilton, Laurentian University, Glenbow Art Gallery, Grimsby Public Gallery, University of Kentucky, Thomas Fisher Rare Book Library and San Francisco Public Library. His work is held in private collections in Canada, the United States, England, Ireland, Australia, Spain, Japan and China. Another one of my prized possessions is Wood Camp, a triptych engraving of a stream inspired by poems in Berry’s Sabbaths 2006.

In 2008 Gaspereau Press released In Black & White: A Wood Engraver’s Odyssey. The book confirms Bates as one of Canada’s best wood engravers. It also confirms that he is as handy with a pen or keyboard as he is with such engraving tools as a spitsticker or scorper.

It’s a handsome hybrid — personal memoir in the context of art history. Updated and expanded from a limited edition published in the United States in 2005, it traces his career as freelance illustrator and publisher of his own West Meadow Press.

Through its 142 pages Bates tells how he got involved in wood engraving, first in Hamilton and later in Clifford. He also traces the history of relief printmaking, pointing out the often misunderstood distinctions between wood cut and wood engraving.

One of the most enjoyable aspects of the book is his recollections of working with Mitchell, Reaney and Berry (the only one of the three writers still with us). White & Black brims with more than 75 illustrations.

Being a fan of both Bates and Berry, I cherish Window Poems, a lovely trade hardcover published by Shoemaker & Hoard in 2007 based on the fine-press edition released by Press on Scroll Road. The collection of poems includes three wood engravings by Bates accompanying the text in addition to the cover illustration.

I must purchase Roots to the Earth the next time I’m in Clifford. I sometimes drive through the town on my way fly fishing on the Maitland or Saugeen river systems. As mentioned above, Roots to the Earth was first published under Bates’ own imprint in 1995. Larkspur Press republished the poetry collection in a beautiful limited edition of 100 in 2014. Counterpoint Press, which publishes all of Berry’s books, published a trade edition in 2016 with the addition of a short story, The Branch Way of Doing. Bates  was commissioned to engrave a new cover image and provide two engravings for the story.

It goes without saying, I’m eagerly anticipating his storybook on fly fishing. 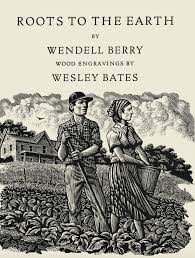