I first met David Francey at a house concert hosted by Jack Cole, founder of Old Chestnuts Song Circle and artistic director of Folk Night at the Registry, which just celebrated its 10th anniversary.

It was 1999 and the Scottish-born, Toronto-raised singer/songwriter had just released his debut album Torn Screen Door. He was accompanied by Montreal-based guitarist Dave Clarke and multi-instrumentalist Geoff Somers, who eventually moved to Cambridge.

In recent visits to Waterloo Region, the carpenter-turned-recording artist performed at the Original Princess Cinema’s Live on Stage series, where he returns May 28. Francey will be accompanied by Mark Westerberg on guitars and background vocals (who joined him at the Princess in 2013 with banjo ace Chris Coole) and Jamie McKie in support of his 12th album Empty Train.

Francey enjoys returning to Waterloo Region. ‘I’ve enjoyed it from the get-go,’ he confirmed in a previous interview. ‘I have real fondness for the place. It’s a great place for music; it has never let me down.’

I liked Francey from our introduction in Cole’s living room through various telephone interviews conducted over the years in anticipation of local appearances. His soft-spoken charm, brushed with a lilting Lowlands’ burr, translates on stage through the stories he tells as song introductions.

I was similarly drawn to the quality of his song craft. I don’t know what kind of carpenter Francey was until forsaking it for professional music at age 45 at the encouragement of his wife, artist Beth Girdler. But I always thought his songwriting inspired comparison to fine woodworking. It was his masterful song craft that led me to refer to him in an early concert review as Canada’s Robbie Burns. I wasn’t just waxing poetic.

Born in Ayrshire — otherwise known as Burns Country — in southwest Scotland to parents who were factory workers, Francey moved to Canada when he was twelve. For decades he worked as a labourer, all the while writing poetry and setting it to melodies in his head and singing it to himself as he worked. Unlike the vast majority of contemporary songwriters, he doesn’t accompany himself on guitar or piano while composing. Likewise he doesn’t play an instrument on stage, relying solely on his warm baritone.

Recalling Stan Rogers and early James Keelaghan, not to mention Burns more than two centuries ago, Francey is a true folk artist, documenting the lives of ordinary working people, both rural and urban. Like Gordon Lightfoot, his politics remain subtle and implied rather than overt and declared.

With a voice as warm and friendly as a shaggy dog, the affable artist gives expression to songs that are elegant in their simplicity. He writes about feelings all of us share in language all of us understand. 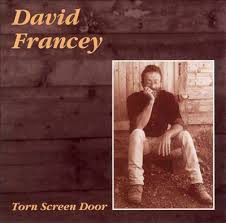 His artistry has not been lost on critics. He has been something of a Juno darling with a trio of wins (Right of Passage 2008, Skating Rink 2004, Far Side of Summer 2001) and a couple more nominations (Late Edition 2012 and Waking Hour 2004). In addition to recording and touring with Canadian artists, he has worked with American roots icons Kieran Kane, Fats Kaplin and Kevin Welch. His songs have been covered by such artists as The Del McCoury Band, The Rankin Family, Tracy Grammer and Keelaghan.

Francey hasn’t changed much since tossing his hat in the professional music ring. His easy demeanour, horn-rimmed glasses, graying beard and worn blue jeans remain as identifiable as fingerprints. ‘Every morning I wake up and can’t believe I’m doing this for a living,’ he once confided. ‘I never take it for granted. I came to it late and I’m happy with the way things have worked out.’

The same sentiment is echoed by all who enjoy well-crafted contemporary folk music. Thank you David.

Below Francey performs the title track from Empty Train.