Roots Weekend at the Registry

Many roots music fans are amateur musicians, which makes learning from the pros a special treat.

Trent Severn’s Emma Gryner, Dayna Manning and Laura Bates performed a Folk Night at the Registry concert and conducted a harmony singing workshop. Consisting of Jens and Uwe Kruger and Joel Landsberg, the Kruger Brothers performed and conducted a strings workshop. The Krugers returned a year later in response to popular demand and delivered a superb, sold-out concert.

Info on the workshops are as follows:
10 am — Titled Songwriting, Rush’s workshop features stories spanning
a half century in music.

1 pm — Titled Storytelling in Song, Gunning talks about telling
stories in song and about the process of collaborating with other
songwriters. Participants with songs in progress are invited to share them with the workshop.

The workshops are $25 each. Pre-registration is required. Contact Jack Cole at jhcole@mgl.ca 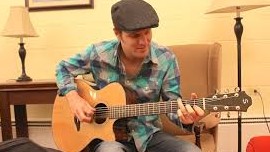 Gunning returns to perform the Merrick Jarrett concert, held annually as a tribute to the late, much beloved Canadian folk icon.

The Nova Scotia-based singer/songwriter debuted at the Registry in 2007. At the time he was virtually unknown in Ontario despite releasing a number of acclaimed albums and winning a string of East Coast Music Awards. He later returned at the invitation of Folk Night at the Registry — with Edmonton folksinger Maria Dunn in 2009 and as a solo act in 2011 and 2012. The Newfoundland duo Ennis opened for him at his last appearance.

I remember hearing about Gunning for the first time in 2007. Although I kept my ear pretty close to the music ground as an arts reporter for the Waterloo Region Record, I had not come across Gunning until a promoter informed me he was premiering in Ontario. He now performs in Ontario more than he does in the Maritimes. It was a privilege to introduce Gunning to Ontario audiences.

What impressed me initially was the quality of Gunning’s songwriting. It’s easy to understand why he has collaborated with so many of the country’s best songwriters including the late Ron Hynes and childhood friend George Canyon, in addition to James Keelaghan, David Francey, Lennie Gallant, Bruce Guthro, Karine Polwart and Matt Andersen, among others.

Although his polished vocals were evident on his albums, hearing Gunning live  underscored the strength his burnished baritone, augmented with thick regional accent — as warm as an East Coast sunset at the height of summer.

I wasn’t aware of Gunning’s prowess as a guitarist until I saw him perform, whether fingerpicking or strumming acoustic six- and 12-string.

He won me over with his warm friendliness and Forrest Gumpish humour when I interviewed him prior to his Ontario debut. These personal characteristics subsequently found expression when he was on stage. 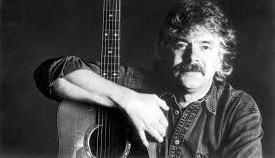 Born in New Hampshire in 1941, Rush is a seminal figure in folk music. He not only helped shape the folk revival of the 1960s, he influenced the  singer/songwriter movement of the ’70s and the new-folk renaissance of the ’80s and ’90s. No less an artist than James Taylor told Rolling Stone magazine ‘Tom was not only one of my early heroes, [he was] one of my main influences.’

Before graduating with an English degree from Harvard in 1963, he had become a fixture of the Boston coffeehouse scene. From the outset Rush interpreted various traditions, from blues and early rock ’n’ roll to country and traditional folk, with a pleasant, easygoing tenor. Later he contributed to the folk-rock, country outlaw and heartland rock movements.

Like Judy Collins, Rush helped establish careers. Although he wrote original songs, his sensitive ear was drawn to many gifted emerging songwriters who subsequently rose to prominence. For example, The Circle Game — first released in 1968 with cover photos by Linda Eastman (later to become McCartney) — combines a pair of poignant originals (the instrumental Rockport Sunday and heartbreaking No Regrets) with Joni Mitchell’s Tin Angel, Urge For Going and The Circle Game, along with James Taylor’s Something in the Way She Moves and Sunshine Sunshine, Jackson Browne’s Shadow Dream Song and Charlie Rich’s So Long.

Those unfamiliar with Rush’s artistic legacy can do worse than hunting down his retrospective The Very Best of Tom Rush: No Regrets, his 17th album since 1962 and released by Sony Music in 1999. In addition to seven enduring original songs, its covers span Jesse Fuller, Bukka White and Eric von Schmidt to Browne and Mitchell. It also includes songs by a couple of other Canadian songwriters — David Wiffen’s Lost My Drivin’ Wheel and Murray McLaughlin’s Child’s Song.

In the 80s Rush formed his own management company, booking agency and Night Light record label (before independent labels became popular) while continuing to perform, culminating with his legendary Boston Symphony Hall concert in 1982. In the new millennium he has released eight albums, including 2013’s Tom Rush Celebrates 50 Years of Music (includes DVD of the concert). Nearly six decades later, he’s still at it. This thumbnail bio doesn’t do Rush justice; it’s just a teaser.

Nov 19
LAURA SMITH with NAMING the TWINS
$20/25
Raised in Ontario and a resident of Nova Scotia for many years, Smith is an eloquent songwriter with a voice as rich as vintage single malt.

April 8
STEEL RAIL
$18/$20
Based in Montreal, the acoustic folk trio performed a Folk Night at the Registry highlight show in 2007.

May 6
BILL STAINES
$18/$20
Host of the 11th annual Merrick Jarrett concert, the talented New Hampshire-based singer/songwriter has penned such contemporary classics as Place in the Choir and Roseville Fair.