KITCHENER — American Woman was more than a punch in the solar plexus of a strutting international superpower entangled in an unpopular war. When it hit the airwaves in January 1970 it was a defiant declaration that Canadian rock music had arrived on the world stage.

All songs led to the rock anthem Thursday night (August 6) when former Guess Who lead singer/keyboardist Burton Cummings kicked off the 15th annual TD Kitchener Blues Festival. His old, sparring sidekick Randy Bachman performs tonight (Friday) in Victoria Park as the festival moves into full gear. The last time the Canadian rock legends shared a stage in Kitchener was at the Aud during the 2010 Guess Who reunion tour.

For a vocalist ‘about two great parties shy of 70,’ Cummings was in good form. And with a tight band of musicians capable of the male power harmony that defined rock in the 1970s, he had the Clock Tower Stage rocking during his 90-minute set of true-blue Canadian rock classics. ’There are three true rock nights in the week,’ he asserted. ‘Thursday, Friday and Saturday, and this happens to be Thursday.’

Cummings was personable, introducing a ‘whole bunch of songs you might have heard on the radio a few times.’ And he seemed truly grateful for the rousing response he received from fans, many of whom were screaming, shouting, arm-waving women of a certain age.

He got the rock ball rolling with No Sugar Tonight, followed by Clap for the Wolfman. He remembered guitarist Kurt Winter, a founding member of the ‘real Guess Who’ who died 15 years ago, with Hand Me Down World. Then he turned on the ‘Way Back Machine’ with Laughing.

Cummings moved on to Running Back to Saskatoon, recalling that the Toronto Star at the time declared it ‘the first true Canadian rock and roll song.’ Hard to argue it isn’t, recognizing that it represented a giant step forward from the tunes churned out by such Canadian acts as Robbie Lane and the Disciples.

Then it was Eddy Grant’s Baby Come Back from Jukebox, an album of covers of favourite songs from their formative years which Cummings recorded with Bachman in 2007. Albert Flasher set the table for Cummings’ first solo gold record Stand Tall.

Before paying homage to Buddy Holly with 1957’s Not Fade Away, Cummings took a moment to praise the ‘great’ crowd: ‘If all performers were treated like you’re treating us, there would be no bad shows.’ Cummings’ good spirits and generous words brought back sour memories of a concert he gave at Lulu’s Roadhouse in the 1980s. He was bitter about his career at the time and he compensated by heaping unmitigated scorn on such up-and-comers as Brian Adams.

Cummings then recalled ‘some (of the) good days’ he enjoyed with Bachman as teenagers. He was still living with his mom and grandmother when one afternoon his musical friend dropped by and the two knocked off a little ditty that ended up being played on the radio more than five million times. These Eyes is still as fresh as new eyeliner thanks to Cummings’ signature vocals.

Star Baby and In Your Back Yard paved the way for the most-often played song on Canadian radio out of more than 30 albums — Break It to Them Gently.

The penultimate American Woman was followed by the closer No Time (Left for You), for which Cummings switched from keyboards to guitar so he could join the band in some nostalgic rock ’n’ roll hijinks.

Fans clambered for an encore but festival organizers apologized, confirming that city noise bylaws stipulated that the music had to ‘die’ (with a nod Don McLean) at 11 pm.

This is the first time the Bluesfest has presented ticketed concerts on opening consecutive nights. 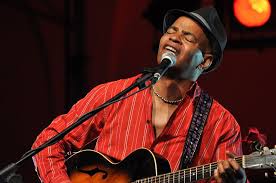 Here’s a personal list of some festival highlights which blues fans, not to mention fans of good music, will not want to miss: