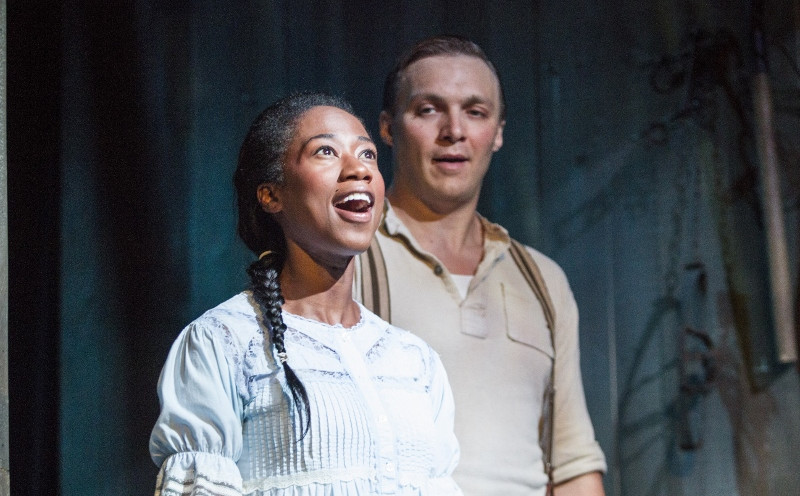 Such Stuff as Dreams

I am alone on the moon
— Mary’s Wedding

BLYTH — William Shakespeare said it most beautifully — we are such stuff as dreams are made on.

Stephen Massicotte takes Shakespeare’s observation to heart in his lovely dream play Mary’s Wedding. It’s the last of the four main stage plays to be presented by the Blyth Festival this season; it’s the first production to be directed by Gil Garratt in his role as artistic director. And it’s a beauty.

Like last season, which concluded with Garratt’s St. Anne’s Reel, the festival has left the best for last, concluding on a high sustained note.

Mary’s Wedding unfolds over 95 minutes without intermission. As in a dream, time flies by; the play ends before we know it. Beginning at the ending and ending at the beginning, the play flows back and forth between past and present.

This complex chronology tells a simple story with two interweaving threads: the courtship of two young lovers somewhere in rural Canada — a place resembling the Blyth area — and the horrific experience of one of those lovers in Europe during the First World War, the so-called Great War.

It gives nothing away to reveal that when Mary marries at the height of summer two years after the Armistice, it’s to another man. We know this from the beginning, but as this poetic, bittersweet play unfolds we forget this simple fact, pulling as we do for our two awkward, reluctant, innocent lovers, pure as freshly fallen snow.

The dream world of Charlie and Mary’s bucolic courtship shatters and plunges into nightmare after Charlie goes overseas. They remain in touch through letters, providing an eloquent way of underscoring the play’s narrative and chronological flow.

Directing with sympathy, compassion and lyricism, Garrett gets stunning performances from Eli Ham as Charlie Edwards and Sophia Walker as both Mary Chalmers (Charlie’s betrothed) and Flowers (Charlie’s officer in the trenches). Ham and Walker generate wonderful stage chemistry.

Walker is a gifted actor who honed her craft over multiple seasons at the Stratford Festival. Her Mary/Flowers, augmented by her Milly Steward in The Wilberforce Hotel, gave the festival some of its brightest moments this season. What a festival debut!

Back for his second festival season, Ham continues to display wider reach with every subsequent role.

It’s been some time since I’ve seen a creative team work so well together at Blyth. Kenneth MacKenzie’s set — featuring a ramp and steps, tall fence, small barn, and most wonderfully, a mechanical horse made from a wooden barrel — is perfect. Rebecca Picherak’s lighting design and Lyon Smith’s sound design complement each other brilliantly, whether creating the illusion of a galloping horse, rain or snow, lightning or thunder, gunfire or the detonation of explosives.

Mary’s Wedding reminds us that without dreams there would be no poetry or music or love. Dreams are the hothouse where the seeds of creativity are planted and grow. Dreams nurture imagination and memory.

As Charlie wisely cautions at the outset, ‘there are sad parts, but don’t let that stop you from dreaming too.’

Mary’s Wedding continues in repertory at the Blyth Festival through Sept. 12. Tickets at 1-877-862-5984 or online at blythfestival.com