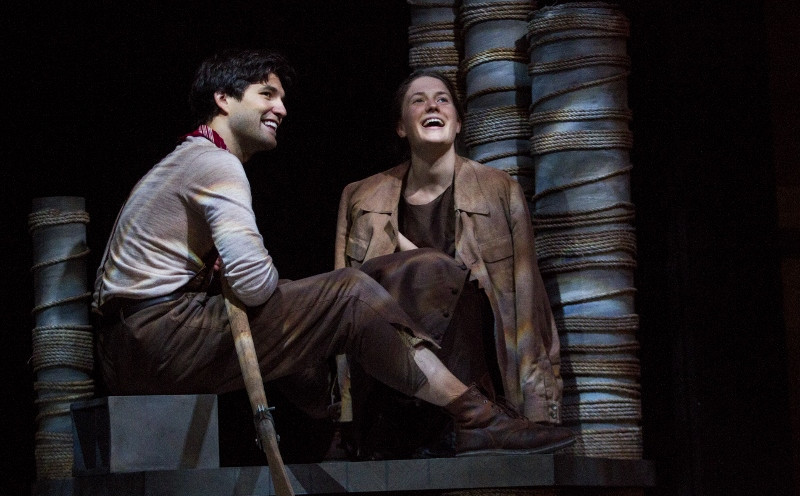 Fury Sinks Under Its Own Steam

BLYTH — In the fall of 1913 the deadliest storm ever to strike the Great Lakes sunk 12 ships. More than 250 lives were lost.

Of the dozen ships that went down, four have yet to be found. In 2000 the Wexford steamer was discovered in 75 feet of water in Lake Huron, nine miles off St. Joseph.

Commissioned and developed by the festival, Fury is receiving its world premier this season.

The idea of embodying the terrible loss of life wreaked by the storm through a single representative story is admirable. Fury, unfortunately, sinks under its own devices.

The play is a tragedy of young love that weaves through its narrative various musical elements, with book by Smith and music by Samuel Sholdice.

Smith’s romantic tale is a woolly shaggy dog that evades the groomer’s brush. The music is unmemorable, a combination of banal lyrics and mundane score.

The story concerns a young woman, Margaret, who is living under the suffocating yoke of an uncle who is a conservative-minded judge in Goderich. Although Judge Cassidy left his family home on the Eastern seaboard years previously without so much as saying goodbye, he’s appointed guardian of a niece he doesn’t know who is running from her own tragic past — which we don’t learn of until we’re beyond caring.

Well-meaning but misguided, the autocratic judge arranges a marriage between Margaret and David an ambitious suitor for whom she has no affection. Michael, the young man with whom she falls in love under unconvincing circumstances, is a bare-knuckle boxing ruffian with both a sweet tongue and a sweet voice.

Michael and his buddy Bernard hire on as deckhands on the Wexford. Their fate is pre-determined.

Nothing about any of the characters rises above caricature and cliche.

David Fox plays Judge Cassidy as a hard man who beat the odds doing it his own stubborn way, only to discover too late that he erred terribly.

I’m not sure why Smith creates Bernard, played by Keith Barker, as a man of mixed Scottish and Algonquin heritage who suffers from narcolepsy. It’s all a bit too much, becoming a mechanical plot device.

Jason Chesworth doesn’t have much to work with as the unlucky suitor David.

Jeff Irving is a handsome, strapping Michael — and he does have a lovely tenor voice. Too bad he doesn’t have better songs to sing.

Rachel Cairns is a spirited, determined Margaret, but unfortunately she either doesn’t have much of a voice or the songs she is expected to sing are out of her comfortable range.

Director Micheline Chevrier is unable to tie all the romantic, narrative and musical threads together to make a compelling nautical romance.

In contrast, Ronnie Burkett’s impressionist set of a harbour and bow of a steamer is clever and effective.

Regrettably, I’ve never heard a less inspired musical setting for the 23rd Psalm than the one presented here.

Fury is a kind of play you, as a theatregoer, want to like. It brims with promise. It’s just that the material doesn’t nurture admiration.