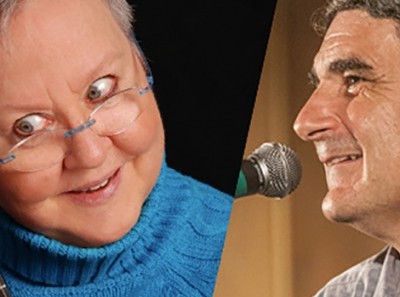 On the Funny Side of the Street: A Night of Brighter Laughter

Christine Lavin has been tickling the collective heart of the New York City folk/singer/songwriter scene since 1984, when she left hospital work to pursue music full time.

Born and raised in Peekskill, a city nestled within the New York Metropolitan area in Westchester County, Lavin became the de facto den mother of the NYC acoustic music community, performing and recording while promoting such artists as Suzanne Vega, Shawn Colvin and John Gorka.

A musical force of nature, Lavin established a reputation as an entertaining performer: sharp-tongued, witty, insightful and engaging. Although her humorous and satirical songs conspired to typecast her as a comic singer (an American version of Canada’s Nancy White), she has always written poignant songs that negotiated the land-mine field of personal relationships with a wordsmith’s eye and a courageous heart.

Lavin has developed a shrewd eye for gifted new artists. She founded a songwriters’ retreat on Martha’s Vineyard that morphed into On a Winter’s Night and On a Summer’s Night tours and recordings.

Four Bitchin’ Babes — a female singer/songwriter round table Lavin founded in 1990 with regulars Sally Fingerett and Megan McDonough and a rotating fourth chair of Patty Larkin, Julie Gold and Debi Smith, along with such honorary babes as Cheryl Wheeler, Kristina Olsen, Janis Ian and Mary Travers — has become a career onto itself, comparable to Canada’s Quartette or Blackie and the Rodeo Kings. In 1997 Lavin passed the reins on to Camille West.

Lavin has produced an impressive songbook of solo work and musical partnerships, encompassing the release of more than 10 compilations and more than 20 solo albums since 1986. Billboard magazine describes Lavin as ‘the central force in the most visible segment of the contemporary folk music scene.’

Joining Lavin at her Folk Night at the Registry debut on February 13 is Don White, the most recent of the many singer/songwriters she has championed. Lavin refers to White as ‘an original. . . blue collar intellectual,’ adding that, ‘the first time . . . he performed with me [was the] only time in my entire career I opened with a ballad because he was so funny the audience was laughed out.’ The concert’s title, On the Funny Side of the Street: A Night of Brighter Laughter, offers a sense of what folk fans can expect.

A product of the vibrant Boston music community of the 1990s, White developed his performance chops in the same clubs that introduced Dar Williams, Martin Sexton, Lori McKenna and Vance Gilbert. He was also a regular comedian at the legendary Catch a Rising Star in Harvard Square.

‘Audiences looking for something fun, fresh, smart and thoughtful will find just that On the Funny Side of the Street,’ promised Folk Night artistic director Jack Cole.

Check out Lavin singing her satirical ditty The Password Song.