Like the Energizer bunny, Glenn Smith just keeps on popping.

The irrepressible blues impresario is turning the page on a new chapter in his ongoing Book of Blues in Waterloo Region. Like any compelling narrative, it’s an evolution of what happened previously.

Smith, who spends most of his time running Ethel’s Lounge, the popular watering hole in UpTown Waterloo, is starting a new venture called Pop the Gator Presents, a semi-regular series of blues concerts to be held at Themuseum in downtown Kitchener.

The debut concert under the new initiative features headliner Marcia Ball, along with opening acts Ginger St. James and the Royal Crowns. Although it takes place March 5, it’s sure to sell out, so blues fans should dig for their wallets now rather than later.

Themuseum is located around the corner from Pop the Gator, the legendary blues club Smith operated with a trio of other partners. Themuseum is where Smith hosted Pop the Gator’s 25th Anniversary Party on March 1, 2014 — a quarter century to the exact date it opened. The blues birthday bash, which sold out within two days of tickets going on sale, featured Otis Clay and the Chicago Fire Horns. Clay opened the original club.

Pop the Gator is the closest thing to an urban myth in the local arts community.

It ran for a mere five years — from March 1, 1989, through New Year’s Eve 1993 — but its status transcends reality. People remember it with intense fondness. Even those who never visited the club, which was located above retail stores on Queen Street South between King and Charles streets, believe they were there. 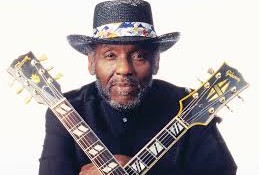 It was the place to be if you wanted to party, with some of the biggest international blues artists rekindling acquaintances with the late, great Mel Brown who anchored the house band, The Homewreckers. The club was a mecca for young musical hotshots, including Shawn Kellerman, Steve Strongman and Julian Fauth, who have since made names for themselves as blues artists.

Pop the Gator booked a cocktail of established and emerging artists, a recipe Smith is following with his inaugural Pop the Gator Presents concert. Although he is an avid collector of music memorabilia, he eschews nostalgia for nostaglia’s sake when it comes to the music itself.

Smith told me prior to the anniversary concert that Themuseum was ‘the logical place’ to hold the event. In addition to its proximity to the original Pop the Gator, the museum is located down the street from the Hoodoo Lounge, the blues club located in the former Mayfair Hotel he ran prior to the Gator.

Smith, who got into the bar game by running The Circus Room, has been a driving force in making Waterloo Region a blues hothouse. He was instrumental in Brown and his wife, Miss Angel, moving to Kitchener. Brown, a gifted artist on guitar and piano as well as vocals, was a musical magnet who had played with many of the greats before mentoring and influencing a generation of local blues artists.

Smith’s Southern Ontario Blues Club concerts held at the former Royal Canadian Legion on Ontario Street (where I first met the affable raconteur), the Hoodoo Lounge and Pop the Gator built an enthusiastic audience for such events as the annual TD Kitchener Blues Festival and its predecessor, Blues, Brews & Barbecues.

Smith agreed to stage blues concerts at Themuseum in response to urging from chief executive David Marskell who has become a close friend of the blues impresario. Smith also was encouraged by friends to whom he confided about the anniversary party. He floated the idea to some people at a Maple Blues Awards and received an enthusiastic thumb’s up.  At the time of the anniversary concert, Smith and Marskell both told me that neither had ruled out the possibility of future partnerships.

Smith, who turned 60 this summer, said he had ‘cleared up some space’ in his life and ‘finally had some interest in doing [concert promotion] again. There was no reason not to do.’ He added that a day doesn’t pass when a customer drops into Ethel’s and asks if he is doing anything. ‘There has always been a general interest.’ He anticipates the new series will enable him ‘to branch out a little from straight blues.’

Smith has no interest in turning back the clock. He always has his eyes focused on the present in anticipation of the future. But he remains acutely aware of the importance of tradition, which is confirmed by his choice of headliner for the Pop the Gator Presents concert launch.

He goes way back with Ball. In the early 1980s when she was preparing to record her debut album for Rounder Records (Soulful Dress), she lived with a high school friend of Smith’s who had relocated from Kitchener to New Orleans. Smith later met up with her at Antone’s, the legendary blues club in Austin where Brown honed his craft. ‘I’ve always been enamoured with her sound.’

Smith booked Ball into the Legion and invited her back to Pop the Gator several times. ‘Whenever she has played here people have loved her,’ Smith observed. ‘ She does well in this market.’ She appeared at the Blues Festival in 2012.

Imbedded in the traditions of Louisiana swamp rock and smoldering Texas blues, Ball is a modern-day practitioner of rollicking New Orleans R&B and raucous Boogie-woogie. The sexy 66-year-old has released close to 20 albums since 1972, bearing such deliciously provocative titles as Hot Tamale Baby, Gatorrhythms, Let Me Play with Your Poodle and The Tatooed Lady & the Alligator Man.

What keeps the diminutive, barrel-chested blues impresario (think of an old-fashioned icebox) popping? Smith does it for love of the music rather than to earn a profit — recognizing he doesn’t do it ‘to lose money,’ he notes with a chuckle.

‘I only do shows that seem right to me. The situation has to work.’ If it ever starts feeling like business, I’m sure he’ll pack it in and retire to his Hawkesville area farm, which he co-owns with legendary rockabilly Rompin’ Ronnie Hawkins.

Here’s Ball kicking up some dust performing That’s Enough of That Stuff in a recent concert. She tickles those honky tonk keys and caresses the ears with a voice that’s been around the block a time or two.