CAMBRIDGE — As I was enjoying the 23rd annual Mill Race Festival of Traditional Folk Music an observation started taking shape.

Although a healthy portion of the performers were young (in their 20s and 30s), the vast majority of audience members were older (50 and up).

This paradox poses a serious problem for the folk festival going forward. It might even threaten its future.

The difference between the ages of performers and audience isn’t confined to Mill Race. I see the same mortality gap at the UpTown Waterloo Jazz Festival and at the Kitchener Blues Festival, but it’s not quite so apparent. It seems that the jazz and blues festivals are able to book performers that appeal to, and attract, a younger demographic.

This gnawing problem is threatening the stability of other performance arts. The KW Symphony is running a deficit and recently laid off staff in a feeble effort to balance the books. Symphony management puts on an optimistic face about turning finances around. But attend any concert and you see an aging audience which, to exacerbate the problem, is dwindling. The same applies to the KW Philharmonic Choir concerts. Similarly Centre in the Square is doing a pitifully poor job of either increasing attendance or attracting a younger demographic.

The younger musicians I saw at Mill Race over the Civic Holiday weekend represented the best the festival had to offer. Concomitantly these seemed to be the best attended sets — even grey haired audiences recognize talent when they see it.

The Young ‘Uns were the festival’s big hit.

The trio from the Newcastle area in northeast England carry on the tradition of folk music as a vehicle of political conscience, social justice and peace. This noble line includes Guthrie (Senior and Junior) and Seeger, early Dylan and Phil Ochs, Tom Paxton, Billy Bragg and Bruce Springsteen. Their playlist includes songs about war, about peace, about poverty, about revolution, about racism. Powerful, powerful stuff.

The Young ‘Uns conveyed this message with stirring, mostly a cappella vocals built on tight, contagious harmony, with large dollops of humour and storytelling doubling as social commentary. Canadian folk fans might compare the trio to the former Tanglefoot in terms of high-octane stage presence and irrepressible vocal energy.

This was the trio’s first visit to Canada. Following their performance debut in Cambridge they head to Goderich for the annual Celtic Roots Festival. Hopefully Canada has not seen the last of this dynamic folk trio with a message. 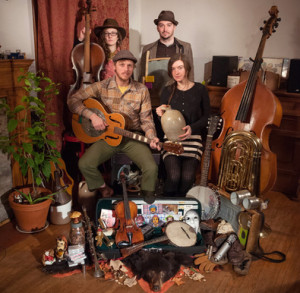 The Everlovin’ Jug Band is a quintet of performers from Waterloo Region who keep alive the songbook of American jug band music from the first quarter of the last century (a blend of vaudeville and medicine show spanning blues, ragtime, country, folk and jazz).

Back for their second time at the festival, the quintet played an assortment of instruments from guitar, banjo (four- and six-string and short-neck), fiddle and mandolin, to euphonium, cello, washboard, harmonica and large earthenware jug. The band of happy musical misfits made its way through a repertoire of original songs (Babe the Dog) and material from such ensembles as the legendary Memphis Jug Band (Dirty Butter).

Back for their third time — not ’turd time’ as one of the quartet clarified — Les Chauffeurs à Pieds lived up to their name as ‘foot warmers’ by offering an infectious blend of toe-tapping traditional music from Quebec City.

(Featured image of the Young ‘Uns from England)