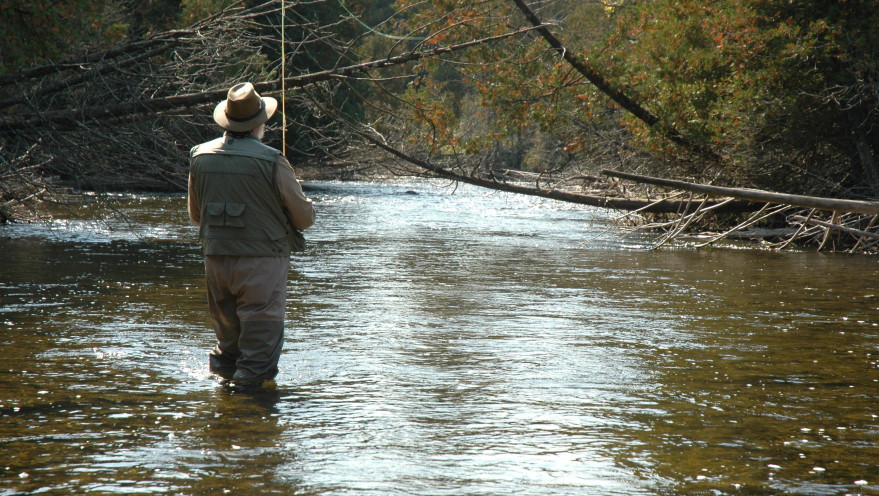 Balm for a Winter’s Sorrow

May you cast your fly into beauty and draw it back over waters of peace.
— paraphrase of words by Odell Shepard

For the last five years I shared my life with a lovely woman in a home surrounded by trees. Wherever I sat in her comfortable townhouse — whether reading, writing or chatting over our freshly ground morning coffee or cherished dram of single malt whisky at bedtime — I could see trees out of all the windows. The view offered a sense of deep contentment, a refuge from a manic world.

Now I sit at my desk above the treetops on the ninth floor of a midtown apartment building. I enjoy the nights best when city lights twinkle on a carpet of dark, rooftop silhouettes. For some reason it reminds me of what I imagine as Charles Dickens’ London.

This winter past was fraught with change, transition and adjustment, not to mention sadness. Separation seldom travels without the company of sorrow and regret. Loss is a persistent ache with long fingers that dig deep beneath tender skin.

But with endings come beginnings — or so the fly angler in me insists. After all, you have to be an optimist to love fishing. However unsuccessful a day on the water might seem, there’s always the next pool, the next bend, the next outing, the next season. Hope is the long, precise, delicate cast to rising, upstream trout. This symmetry of expectation and execution gives fly fishing its pleasingly elegant form which defies perfection despite a lifetime of effort.

The beginning I most eagerly anticipate is my youngest son, Robertson, moving in with me after living with his mother for nine years following our separation and subsequent divorce. Robin, as we call him, just graduated from college and secured his first part-time job. I’m looking forward to accompanying him as he negotiates a period of change, transition and adjustment by helping him get his driver’s licence and secure full-time employment.

There’s no greater satisfaction for a father than helping guide his son through the threshold of manhood.

Known by some fly anglers as the sweet of the year, spring is the season of new beginnings. It doesn’t matter that the hardy among us fish for mighty steelhead through the pewter-bleak days of fall and winter.

Like most fly anglers in southwestern Ontario, I was eager to get on the water when inland trout season opened. Consistently heavy rains, however, delayed our collective gratification. When the rainfall subsided and river levels dropped, my fly fishing buddy Dan and I decided to go to Whiteman’s Creek, a tributary of the Grand River close to where Dan spent much of his childhood.

Known for its rainbows and occasional browns, Whiteman’s happens to be where I first accompanied Dan and his longtime fly fishing companion Jeff on an outing about a decade ago. I had met both anglers through KW Flyfishers, the local club that has been serving members since the 1970s.

I remember the occasion well because I got sufficiently soaked to fill my waders, which required stripping down to bare essentials to dry in the warm chill of spring. I similarly recall Jeff, quite miraculously, finding my car keys on the riverbank. Needless to say, I wasn’t even aware of losing them.

The water was a tad high, a tad fast and a tad muddy when we returned to Whiteman’s which made for tough fishing. Nonetheless, Dan caught a handful of small rainbows. I landed a ‘bow so tiny I initially mistook it for a chub. At least I wasn’t skunked.

In deference to a few Hendricksons we saw fluttering acrobatically against a backdrop of late afternoon sunlight, we both used cinnamon bivisibles — an attractor pattern dating back to the 1920’s that, if not invented by Edward Ringwood Hewitt, was popularized by the Catskills legend in his 1926 book Telling on the Trout.

As the descending sun kissed the tree tops it cooled down quite rapidly. I confided to Dan that one of the joys of gaining experience on the water is dressing properly. When fish reject artificial flies it’s no small compensation to be cosy in wool and fleece. If I’m bowing to age here, so be it.

We were the only anglers on the river, save for a few startled ducks, a visibly perturbed blue heron and a couple of darting kingfishers. We saw lots of deer and raccoon tracks in the wet sand at bank side, so we knew we were not alone. After a late supper and a couple of pints, we went home content, if not exactly happy.

Trying to cast straight and true. Photos by Dan Kennaley

Two days later I accompanied a new angling friend, a physician who learned fly fishing from his father. He was equipped with a vintage Orvis Trident rod handed down from his dad. I recognized the model by its handsome cranberry tube with brass label at one end because I own a Trident as well.

One of the things I learned while wading with Mark is that we share the same hometown of London, Ontario. In fact, he grew up on the same street as an aunt and uncle of mine. Small world.

I didn’t tell Mark — I couldn’t tell him — that the place he took us was where I took my ex-partner on our first fly fishing outing five year’s previously. It didn’t work out well.  We arrived late after I drove too fast to get there. The spring grasses were shoulder high and she was suffering from allergies before we hit the water. Things disintegrated from there. A determined perfectionist since childhood, she quickly grew frustrated by failing to cast in accordance with her customary standards. Maybe it was just bad timing. Or it might have been premonition, prediction or dark foreboding. It’s a memory that burns like a nasty wasp sting on the back of my neck.

I failed with an isopod (sometimes called a scud) pattern which is usually productive on the Conestogo. I also tried a cinnamon bivisible and my go-to Adams. Mark experimented with numerous patterns including one that had been generous on the Conestogo previously. Nonetheless, he led me to a couple of spots I had never fished that are sure to call me back.

On the way home I showed him a favourite spot in gratitude for a good day of fishing punctuated with companionable conversation. Despite promising bug activity and inviting rises for the first time that day, we reluctantly turned away from the river so Mark could fulfill Mother’s Day commitments.

A couple of days later in an email, he rhapsodized: ‘It made my heart sing watching the river start to bubble with duns, brown duns.’

Did I mention Mark keeps bees so he can make mead, an alcoholic drink of fermented honey and water that dates as far back as 6500-7000 BC? In the Old English epic poem Beowulf the Danish warriors guzzle mead while telling tales boasting of adventure and daring around the stone hearth in the great hall. It was the drink of heroic poetry in both Celtic and Germanic cultures.

As if mead weren’t enough, Mark and a couple of friends are planting crab apple trees so they can make cider. Here’s an angler after my own heart, even if my spirit of choice remains single malt whisky.

I returned to the promising location three night’s later. Fishing solo, I found myself the subject of a good news/bad news story. I landed a respectable dozen fish with a bivisible dry fly in a couple of hours  — some of which were rising. But nary a trout. They were small suckers — which I have nicknamed Mennonite walleye because they catch them for the pan — and dinky chub. Fun, but not wholly fulfilling. No matter.

Stepping into a river in the Season of New Life, with its promise of rebirth and renewal, is balm for a winter’s sorrow. It brings sun and warmth to the dark, cold winter of the heart. It transforms a cry of loss into a song of forgiveness, like a lark in the clear air.

Standing in the current is a ritual of redemption — at least potentially, provisionally, symbolically. Waving a long, tapered stick in a graceful arc gives me pause to reflect on the continuum of life: what was, what might have been, what remains and what lies ahead. For all a fly angler can do is cast as straight and as true as he can into the beckoning future — however uncertain and unsure it appears.