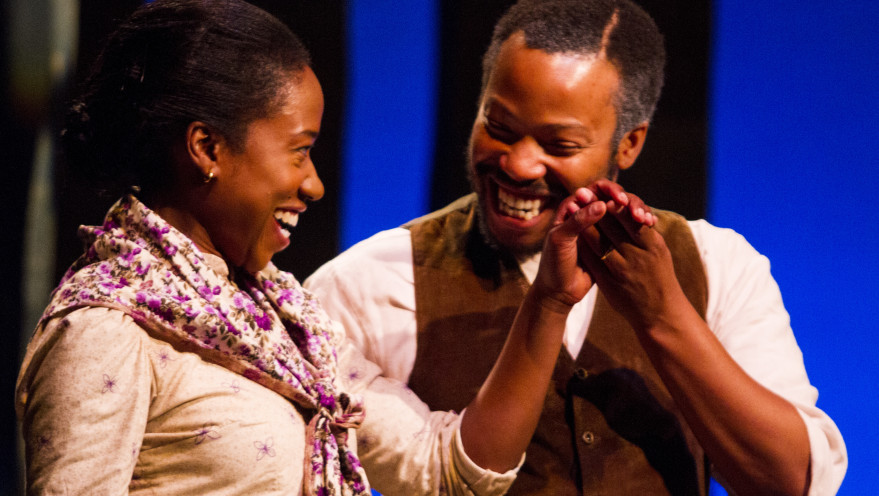 BLYTH — One of the magical things about the creative process is that you never know where, when, how or even why, an idea, theme or concept — in short, inspiration — will transform into art.

Playwright Sean Dixon was in Lucan, Ont. a  few years ago conducting research for The Outdoor Donnellys — a play produced by the Blyth Festival about the infamous ‘Black’ Irish family that terrorized the area in the late 19th century — when he stumbled across an earlier story.

The story of the Wilberforce Colony dates back to the community’s inception in the 1830s when it was settled by emancipated slaves from Virginia.

In addition to The Outdoor Donnellys, Dixon has written a couple of other festival productions including The End of the World Romance and The Lost Heir. This time he transforms history into drama by using the autobiography 22 Years a Slave, 40 Years a Free Man as the basis of The Wilberforce Hotel.

Not having read the autobiography written by Austin Steward, I cannot separate historical fact from creative fiction. But here’s the play in outline.

A pair of black-face minstrels-turned-fugitives from the law seeks refuge in the Wilberforce Hotel, a tavern owned by a character named Austin Steward, president of the Black settlement in Middlesex County.

Beginning as farce and turning into emotionally resonant drama, the two minstrels — who earn their living promoting racial stereotypes, exploiting a popular entertainment fashion of the day — learn about the heroic struggle of the early black settlers.

The production is adeptly directed by Philip Akin, an acclaimed Canadian actor/director and founding artistic director of the Toronto-based Obsidian Theatre Company. The play’s plot is intricate and its timeline is erratic, which could be confusing in less assured hands.

There is only one word to describe the cast — brilliant. The first three are making auspicious festival debuts.

Marcel Stewart gives us a fully rounded portrait of Austin as a man of profound decency and dignity who, like many other emancipated black settlers in Upper Canada, is swindled out of land he purchased legally and transformed from ‘cold, dreary wilds’ into home and productive farm.

Sophia Walker is a proud, defiant and deeply loving Milly, Austin’s wife. And she has a glorious set of pipes.

Joanna Yu’s set has the evocative visual magic of a diorama.

Music director John Millard’s roots extend deep into Waterloo Region. The only observation I can make about his score is that there is too little of it, given the quality of what he provides and the vocal gifts of the cast.

Over its 41 seasons, the festival has succeeded by reflecting the social, cultural, religious and racial textures of the dominant community it serves. The world premiere of The Wilberforce Hotel presents a different narrative, one less familiar, even foreign to the majority of area theatregoers. The stories of black settlement in Southwestern Ontario, whether in Kent, Middlesex, Wellington or former Waterloo counties remain to be told.

Producing a play that offers an alternative narrative with a largely Afro-Canadian cast is a significant, and welcomed, development at Blyth.

Although Canadian theatre is moving rapidly to embody and reflect Canada’s growing multicultural community, it has still ground to gain. The Wilberforce Hotel is one important step in the right direction.

Gil Garratt has chosen to start his tenure as artistic director by avoiding The Road Already Traveled. In their different ways, Seeds and The Wilberforce Hotel undoubtedly test the comfort level of some theatregoers.

To use an analogy, a soft pillow does not guarantee the deep sleep that reveals the dreams and even nightmares that tell us who we are in our innermost being — whether as a person or as a society.

Telling new stories is not without risk. Challenging preconceptions and assumptions is never easy, it is not always popular, but it is what real, vital, enduring theatre is all about. A theatre that follows is lost; a theatre must lead us out of the wilderness of ignorance to survive.

The Wilberforce Hotel continues in repertory through Aug. 8 at the Blyth Festival. Tickets are available at 1-877-862-5984 or online at www.blythfestival.com