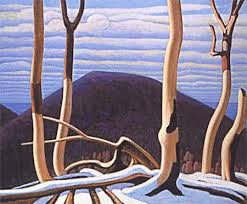 Tracing the Footsteps of the Group of Seven

The Group of Seven remains a paradox.

No Canadian artists are more familiar in terms of simple identification. Everyone has heard of the Group of Seven, right?

But, after a century, do we really know the group’s seven founding members — Lawren Harris, J.E.H. MacDonald, A.Y. Jackson, Franz (Frank) Johnston, Arthur Lismer, Franklin Carmichael and Fred Varley — as individuals? Do we really know what made them tick as artists? Has the last word been written about the legendary painters or is there more to discover, more to uncover, more to unearth?

On the strength of Painted Land, a fine new film about the Group, the story continues as a new generation provides another prism through which to view the country’s most famous and influential collective of visual artists. Subtitled In Search of the Group of Seven, the documentary is coproduced by White Pine Pictures and Solemn Land Productions. White Pines produced two previous documentaries — West Wind about Tom Thomson and Winds of Heaven about Emily Carr. Although Painted Land differs in approach and method, it acts as a companion to the earlier films.

The documentary juxtaposes the past with the present as University of Algoma professor and former Algoma Art Gallery director Michael Burtch and the McGuffin spousal team of writer Joanie and photographer Gary trace the movements of the artists as they explored and painted the Algoma region north of Lake Superior in Northern Ontario during the decade between 1918 and 1928. The trio has spent seven years on this passionate adventure.

Those who dismiss the Group of Seven as dead, white, male cultural relics will be perplexed by the unbridled enthusiasm Burtch and the McGuffins experience when they discover an actual painting site of one of the artists. I, for one, share their infectious enthusiasm. 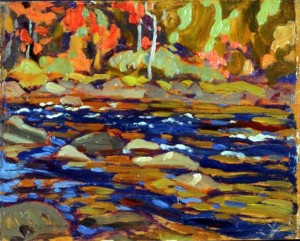 Tracking down the painting sites that form the basis of the most potently iconic images ever produced by artists in Canada is not unique. Jim and Sue Waddington have been on the scent for nearly 50 years. Their sleuthing adventures are recorded in their book In the Footsteps of the Group of Seven.

What Painted Land has going for it is breath-taking cinematography of the Canadian Shield augmented by a masterful fusion of original Group of Seven paintings, archival images (cinematic and photographic) and text (letters, journals and newspaper accounts), evocative musical score by John Welsman, theatrical vignettes and critical commentary. In addition to incorporating unscripted dramatic re-enactments, the film gives voice to individual Group members through voice-overs by some of Canada’s premier actors including Colm Feore, Eric Peterson, R.H. Thompson and Paul Gross.

While Painted Landscape doesn’t offer much in the way of new scholarship, it  offers an engaging distillation of some of the most significant new work that has been done on the Group, such as Ross King’s insights into the influence of the First World War on the artists as detailed in Defiant Spirits: the Modernist Revolution.

The film effectively shows how the relationship between landscape the Group evolved. The ‘rugged, wild land’ north of Superior not only inspired paintings, but penetrated deeper into the artists’ minds, hearts, and dare I say, souls. The sympathetic relationship between the Group and the ’strong and solemn landscape’ (as described by Harris) produced paintings that shaped what subsequent generations of artists, as well as ordinary citizens, came to recognize as the essence of Canada.

Burtch and the McGuffins demonstrate that understanding and appreciating the nature of the Group’s relationship to landscape is not only of interest to art historians, but continues to shape contemporary artistic values and cultural attitudes in Canada.

Although much of Algoma and the highlands north of Superior — comprising the oldest exposed rock formations on the planet — is unchanged from almost a century ago, Painted Land offers a cautionary reminder that the area is under continuous economic pressures, from lumbering and mining to hydroelectric dams and wind turbines, which the Group’s legacy all the more relevant, significant and enduring. 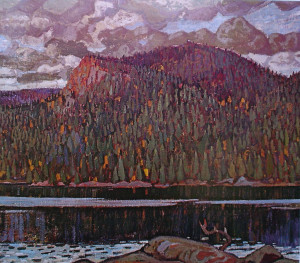 Talking over the phone to director Phyllis Ellis, who also co-produced the film with Peter Raymont and Nancy Lang, was a pleasure.

Ellis acknowledged that the landscape emerged as ‘a protagonist in the (cinematic) narrative.’ Its rugged beauty was relatively easy to document with various state-of-the-art cameras. The challenge, she asserted, was finding ‘a way to articulate the visual language through various voices or perspectives.’

Following the example of the Group, the on-camera personalities, as well as the film crew, relied heavily on the canoe. Similarly the filming process enabled the creative team to develop ‘an internal relationship with the painters.’

‘We came to know them not as old men in slippers shuffling around the Art Gallery of Ontario, but as strong, vibrant, young men who were trailblazing artists,’ Ellis observed. ‘They were best of friends exploring common ground, with common goals and aspirations.’

Ellis said she ‘fell in love with (the various Group members) in their own way and for different reasons.’ When pushed to identify her biggest crush, she confided she grew especially fond of Jackson, the last survivor of the original seven who ironically remained a bachelor. She hopes the film allows viewers ‘to get to know the artists in a personal way’ and to come to an understanding of ‘why they painted where they painted.’

‘Despite how much we know about the Group of Seven, there are still new things to say. Against all odds they realized their heroic dreams. It’s an extraordinarily romantic story.’

Showtime for Painted Land at the Original Princess Cinema is October 30 at 2 p.m. and October 31 at 2 and 4:30 p.m. Information at www.princesscinemas.com/movie/painted-land-in-search-of-the-group-of-seven

See the trailer below.

(Feature image is Above Lake Superior by Lawren Harris)