Spirituality Through the Back Door

I entered the miraculous, marvellous, sacred world of Celtic spirituality through the back door. And I haven’t retreated since.

I was never a regular churchgoer. Although I was baptized in an Anglican Church, where my mother and her sister went as children and where my mother and father were married, I didn’t attend church regularly growing up. Sometimes I accompanied friends to their churches, but nothing ever stuck. My parents were not churchgoers. My mother didn’t return to the Anglican fold until my brother, sister and I left home.

I once dated a Catholic woman who was drawn to Eastern religions, which proved unsatisfactory to me. I tend to agree with the great Swiss psychologist Carl Jung’s warning about adopting religions outside of the culture in which you are born and raised. For a couple of years, I enjoyed going to a non-denominational church that takes place through closed-circuit video in movie theatres across Southwestern Ontario. I found the teachings — for they were not called sermons — to be engaging and relevant to our complicated lives.

My first wife and I were married in a Presbyterian Church, but we never attended services together. My second wife and I were married in a United Church. We attended the United Church for a few years, when our two sons were young. I was confirmed there. However, a scandal involving our charismatic minister, who was an inspired preacher, not only sent him packing, it ended my church-going. His replacements couldn’t preach to save a soul.

My partner, Lois, attends an Anglican Church, sings in the choir and serves. She has even sat on parish council. She takes her spirituality seriously. She finds deep solace in, and takes great comfort from, her faith.

I frequently attend services and take Communion. I most enjoy Evensong, embraced in the church’s warm, rich, oak interior, bathed in the illumination of the soft light of stained glass, as winter dusk quietly approaches. The hymns and anthems speak to me in a profound way.

Although I have never felt spiritually fulfilled in an institutional church for more than short periods — and am no stranger to sin in the ordinary sense of the notion — I have always been drawn to the spiritual life.

I have read many literary, theological and liturgical books spanning a spectrum of religions and spiritual traditions. I also have read deeply into the writings of Jung,  which influenced the graduate thesis I wrote 40 decades ago on the Canadian writer Robertson Davies.

But my most deeply satisfying spiritual explorations have taken me into the arcane Celtic world, which I first entered more than a quarter century ago through traditional music. Listening led to reading about a spiritual tradition which, ironically, is rooted in an oral tradition.

My readings were enhanced by a couple of trips to Scotland, the land of my paternal ancestors, and a trip to Ireland. I have also completed university and college level courses in Celtic spirituality and attended retreats. I remain steeped in Celtic music and enjoy the Water of Life (uisge beatha in Gaelic), otherwise known as malt whisky. I believe the world of nature is Holy, its flora and fauna sacred. Fly angling and canoeing bring me in direct and immediate contact with Creation.

Armed with a deep affection for Celtic spirituality, I lectured annually at the Fergus Scottish Festival for 12 years. Over the last couple of decades, I gave a couple of talks at McDougall Cottage in Cambridge, and lectured for two years at the shortly lived Elora Celtic Festival.

When I lectured, I ended by offering those in attendance copies of a bibliography of books and videos I compiled over the years. It constitutes my own Celtic library, collected haphazardly as I have found books on my travels and in secondhand bookstores. In customary Celtic fashion, sometimes the books found me.

In addition to books examining various aspects of Celtic spirituality, others are histories of the Celtic world or books sympathetic to a Celtic Way of viewing the world, past and present. One internationally recognized Celtic scholar is especially interesting because of his connection to Southwestern Ontario. Philip Newell, a Church of Scotland minister who served as warden of Iona Abbey, was born and raised in Hamilton.

My library is neither comprehensive nor complete. Nonetheless, it is what I possess, what I have read and what I would like to pass along to fellow pilgrims navigating the tempestuous waters of life. As the English visionary poet William Blake exclaims in The Marriage of Heaven and Hell: Every Thing that Lives is Holy. 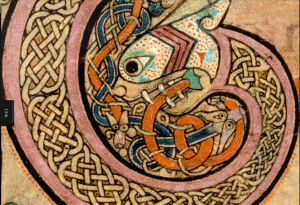 VIDEOS:
The Celts: Rich Traditions and Ancient Myths (BBC, 1986)
Island Soldiers: The History of the Celtic Saints (Newbridge Communications,1997)
A History of Scotland (BBC, 2010)
How The Celts Saved Britain (BBC, 2010)