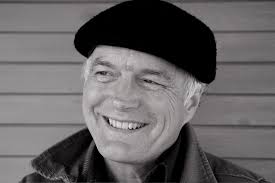 Singing Songs of Tom & Group of 7

It is imperative that the artist reveal through the medium in which he is happiest, what he sees, thinks and feels about his surroundings.
– Franklin Carmichael

No contemporary Canadian singer/songwriter better embodies and reflects the spirit of the Group of Seven than Ian Tamblyn. It took the celebrated artist a staggering 38 albums, but he has finally dedicated a recording to the legendary artists he so closely resembles.

Produced in partnership with the Art Gallery of Sudbury, Walking in the Footsteps features 15 original tracks, including Carmichael, Brush and Paddle, Higher Plane, That Boxcar in Algoma, Down at the Tea Lake Dam, My Heart Belongs to the Northland in Spring, AY, Looking Down on Grace, Footprints on the Mountain, Share with You, Through Lace Curtains, Emily-Tanoo Morning, Some Come Home, MacDonald in the Mountains and Clemtu.

The songs, some of which were written earlier, are accompanied by a 16-page booklet of lyrics and liner notes by Tamblyn which includes Joachim Gauthier’s famous photo of Group founding member Franklin Carmichael at Grace Lake. The CD cover was designed by Toronto artist George Walker who published a fine book of engravings, The Mysterious Death of Tom Thomson. The package is rounded out with a pair of never-before exhibited watercolours by Carmichael and an oil from a private collection by A. J. Casson, a later member of the Group.

Subtitled Celebrating the Group of Seven, Walking in the Footsteps is the latest in an impressive line of musical works devoted to Tom Thomson and the Group spanning a range of genres including folk, jazz, rock, operetta and ambient music. An incomplete list includes Jim Betts’ pocket musical Colours in the Storm, David Archibald’s folk opera Northern River, David Sereda’s Songs in the Key of Tom, Tony Quarrington’s Group of Seven Suite, Kurt Swinghammer’s multimedia song cycle Turpentine Wind+reWIND and the Rheostatics’ Music Inspired by the Group of 7, not to mention songs by the Tragically Hip (Three Pistols), Mae Moore (Tom Thomson’s Mandolin) and Donovan Woods (Lawren Harris).

Of all the music devoted to Thomson and the Group, Walking in the Footsteps is my favourite. First, the songwriter has intimate experience, gained over many years, of the Canadian Shield landscape that inspired the painters. Second, Tamblyn has not only researched his subjects but has developed his own perspective, which is reflected in his album notes.

Consequently listeners familiar with the painters can readily identify them through Tamblyn’s lyrics, which capture the personalities and creative temperaments of the individual artists. Conversely listeners who are discovering Thomson and the Group for the first time benefit from a generous and trustworthy introduction.

Tamblyn returns to Waterloo Region on March 12 to perform a Folk Night at the Registry concert at Kitchener’s Registry Theatre.

I have enjoyed the opportunity of seeing Tamblyn perform numerous times over the past four decades. I first saw him in Peterborough in the early 1970s at Trent University, which we both attended. He was subsequently a recipient of a Distinguished Alumni Award from Trent. I saw him again in the early 1980s at the Brantford Folk Club. Most recently I saw him in 2008 at the Original Princess Cinema where he appeared at an impromptu tribute for the late, great Canadian songwriter Willie P. Bennett.

I have interviewed Tamblyn and reviewed concerts and a fistful of albums, both lyrical and instrumental. My most extensive interview was for Listen Up, a 39-episode TV series that originally aired on Vision TV in 1994. The show, created by Canadian feature filmmaker Terry Odette, examined the spiritual dimension that informed the music of such Canadian songwriters as Heather Bishop, Valdy, Ferron, Stephen Fearing, James Keelaghan, Garnet Rogers, Connie Kaldor, David Essig, Murray McLauchlan, Gwen Swick, Don Ross, Scott Merritt, Spirit of the West and the Rheostatics.

Tamblyn gamely accepted the role of Listen Up guinea pig which extended beyond being the show’s debut guest artist. He persevered while the creative team ironed out production wrinkles. It was a testament to the artist that he retained his professionalism and humour throughout an exhausting ordeal in the old Tannery building in downtown Kitchener before it was transformed into a hub of high-tech excellence.

As the show’s off-camera interviewer, I asked the Juno winner about a few of his songs, some of which have attained the status of contemporary classics. His answers offered a glimpse of the artist behind the songs, which I believe remains as relevant today as it was in 1994. I invite readers to be the judge.

Woodsmoke and Oranges is a song Tamblyn describes in liner notes as ‘at the heart of the Superior Quest.’ Long before Walking in the Footsteps, the song is reminiscent of Group of Seven work painted in Algoma and on the north shore of Superior in the decade following the First World War.

Firewood, smoke and oranges, path of old canoe
I would course the inland ocean to be back to you
No matter where I go to, it’s always home again
To the rugged northern shore, and the days of sun and wind
And the land of the silver birch, cry of the loon
There’s something ’bout this country, that’s a part of me and you.

Tamblyn said it was up to audiences to decide whether the song was a metaphor for either his life or what he has done. However, he acknowledged, ‘I live by every line in the song.’ In many ways the song is about surrendering to Nature, an experience the artist knows intimately. ‘It behooves you to know when to surrender (to Nature),’ he observed.

A playwright, composer, and writer who has circumnavigated the earth and bridged the Arctic Circle and Antarctica under the auspices of scientific and artistic adventure, Tamblyn has spent a lifetime up-close and personal with the natural world and its wonders. His relationship to Nature has shaped his life and his art as both theme and structural principle. Nature is the story and the song of his life.

In Once Upon a Railroad, Tamblyn joins the Canadian artists who have examined the importance of the transcontinental railroad to Canada as historical reality, unifying symbol and mythic subtext of story (Pierre Berton’s popular histories The National Dream and The Last Spike), poetry (E. J. Pratt’s epic narrative Towards the Last Spike) and song (Gordon Lightfoot’s Canadian Railroad Trilogy).

Once Upon a Railroad differs from these iconic creation works because it laments the loss of the railroad that once linked the country from east to west coast. Described by Tamblyn as ‘a tragedy of the national railroad system,’ the song is an elegiac remembrance of the disinherited towns and displaced people that accompanied the erosion of the transcontinental transportation artery. ’The national railroad was a construct. . . perhaps a false one. . . that united the country. We lived our lives that way. We created the country,’ he explained. ‘I don’t lament the end of the railroad but the people who were left behind and the no-name towns that were forgotten.’

No Canadian non-indigenous songwriter has written more prolifically or more eloquently about the plight of Canada’s aboriginal peoples since European contact. Northern Town chronicles the psychological and spiritual cost when people lose contact with their Oneness with Nature.

25th Hour of the Day is one of Tamblyn’s most overt expressions of spirituality. He clearly felt uncomfortable when I asked him about the song he called a ‘secular prayer.’  Content to let the song speak for itself, he admitted knowing less than he thought he knew when he was 25. ‘I had great certainty what I was writing about then. Now I’m not so sure.’

In the 25th hour of the day I made my peace
And in that time allowed I unveiled a masterpiece
All the lessons they were learned
All the lost had been returned
All debts were repaid
In that glorious hour of the day.

And in the 25th hour of the day all was done
No stone was left unturned, no song unsung
Not one lingering ‘might have been’,
Or ‘If I could do it over again’
For in that hour ‘over again’ was easily arranged.

In the 25th hour of the day I closed my book
And for the first time in many years I had a chance to look around me
No one calling on the phone – oh my god how the boys have grown. . .
But it was not too late, in that glorious hour of the day.

And in the 25th hour of the day all was revealed
And though you may not believe, all wounds were healed
And in that hour the lost were found
So we walked to higher ground
And there watched the sun refuse to go down
In that glorious hour of the day.

In the 25th hour of the day I made my peace.

Tamblyn has been a musician since 1972. The multi-instrumentalist, who plays guitar, hammered dulcimer, harp, synthesizer, organ and piano, has written more than 1,500 songs and released a staggering number of albums in addition to producing dozens of albums for other artists. His songs have been covered by many artists, some of whom — Lynn Miles, Susan Crowe, Hart Rouge, Gwen Swick, Valdy, Brent Titcomb, Sneezy Waters, Ken Whiteley and Rita Chiarelli, among others — contributed to a tribute album Coastline of Our Dreams. He has also written 14 plays and over one hundred theatre soundtracks. Currently he is writer in residence at Carleton University, teaching songwriting and composition to fourth year students.

In 2012 Tamblyn was made a fellow of the Royal Canadian Geographic Society for his guiding and creative work in the Canadian Arctic. He has an honourary doctorate from Lakehead University. In the spring of 2014 he finished The Labrador, the last of his Four Coast Project.