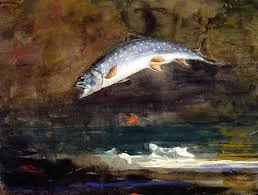 I was recently purging my electronic archives in honour of autumn cleaning when I came across the earliest personal essay I wrote celebrating my passion for fly fishing. I was still working as an arts reporter for the Waterloo Region Record at the time. Reading it after a decade evoked pleasing memories which I’d like to share. I’ve added some current reflections for context in bold face. 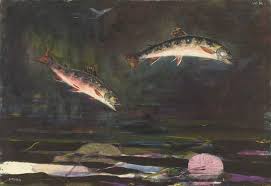 It had been a rough few weeks. As chairman of the union at the newspaper, I had been involved in bargaining that had been on a collision course with a strike deadline, which is never without frustration and stress. We averted labour wreckage, but even a couple of weeks after ratifying a new four-year collective agreement, I was stuck in a funk.

‘Is everything OK?’ my supervising editor asked. ‘You don’t seem your chipper self.’ I don’t generally think of myself as chipper, but no matter. She was on to something.

‘I’m OK,’ I replied, knowing full well it was time. Time to hit the river, which in this case is the tailwater of the Grand River (now my home water) between Elora and Fergus in southwestern Ontario. This is my first year of fly fishing and this particular Friday was my first outing in September, my favourite month of the year.

I left the city sipping a large, double-double from Canada’s ubiquitous drive-through and I was humming along to a CD of Neil Young at Massey Hall, triggering memories of a time long past when I went to sleep to the softly turning vinyl soundtrack of After the Gold Rush and Harvest. I could feel the stress seeping out of my pores as I drove through Old Order Mennonite country, passing black buggies pulled by horses. I equate the graceful simplicity of Mennonite life with the fly fishing aesthetic at its purest.

The pastoral landscape was bedecked in the harvest splendour of gold, canary yellow, pumpkin and russet. The trees were beginning to abandon various shades of green in favour of the rich, burnished patina of fall.

I went to Grand River Troutfitters fly shop (now closed save for an online guide service) and sought advice on choice of pattern from owner Ken Collins. I was told emerger and adult caddis and terrestrials were the ticket.

I have developed the habit of visiting fly shops wherever available when I’m fishing unfamiliar or challenging water. A modest purchase wrapped in a ribbon of sincerity will usually win you invaluable information of where and how to fish under the local weather and water conditions.

Minutes later I was on the Grand casting fur & feather. Although I entered at a public access point, I had the river to myself, save for a couple of squawking seagulls and a half dozen nervous Canada geese who took flight above the river when I brazenly encroached too closely. Standing knee deep in the brisk current, casting, taking a couple of steps, casting again, trying my best to remain attentive to what the water might offer, was both refreshing and invigorating.

The weather was glorious, with Paul Newman clear-blue skies and comfortably warm temperatures in the low 70s (I still relate to Fahrenheit easier than Celsius). There was a light breeze, which for a neophyte fly fisherman is a bonus because it disturbs the water just enough to help you sneak up on unsuspecting trout — or so the theory goes.

It was one of those days when catching a fish wasn’t a requisite to the enjoyment of being on the river casting in rhythm to its music. Nonetheless, I caught a nice, robust brownie — 12 inches to be precise — on a caddis fly. I was amazed by its intense colours. Multifarious hardwoods aren’t the only natural wonders that celebrate autumn with a brisk cacophony of colour.

After about three hours I was ready to head home. I worked that evening and I wanted to get back in time to do some preparation. I was reviewing a concert in Stratford featuring hometown Celtic songstress Loreena McKennitt — the perfect way to end a few hours on the river.

Until I retired from arts reporting in June 2015 after 40 years in daily journalism, I took great delight over the last decade fly fishing in the morning and covering a cultural event in the evening, whether a concert, theatre performance, gallery opening or book launch. I was always energized from an intellectually and emotionally satisfying day that combined culture and nature, sport and craft, angling and writing. It was a case of having your art and eating it too. Yum, yum. 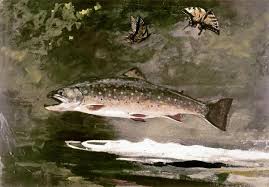 On the way home I stopped at one of the most accessible spots on the Grand. It’s where I learned fly fishing basics from Steve May and Ian Colin James, professional guides and commercial fly tyers who are also good writers.

Steve, a man who shares his expertise in a casual, low-wattage way, doesn’t do as much guiding as he used to. I’m pleased he’s one of the professional anglers who is a fellow member of KW Flyfishers, a club based in Waterloo since the 1970s. Meanwhile, Ian, one of Canadian fly fishing’s most wildly colourful ‘characters,’  is now wading the Waters of Paradise after suffering a fatal heart attack.

I can’t emphasize enough the value of seeking out good instructors, professional or seasoned fly anglers, to help beginners gain enough proficiency in the shortest period of time to enjoy the pursuit of gamefish on the fly. You can learn the basics in an afternoon, but that’s insufficient time to give you the rudimentary skill set the passion demands. Your money is well spent.

I pulled up beside a decrepit van. When I got out of the car, I heard the joyous cackle of young children, a couple of girls as it turned out, playing along the river bank. I walked out on a rusty, old girder bridge (since demolished and replaced with concrete) and spotted the girls’ father tying on a fly.

He was a tall, gangly guy in his early 20s. He wasn’t wearing any trendy fly fishing garb; apparently he had never heard of L.L. Bean, Filson and Orvis or, if he had, wasn’t interested in angling haute couture. He didn’t bother with chest waders and he had a white sun hat perched on his head. He had pulled his fly box out of a beaten-up army surplus bag at his side (Ian James employed the same kind of canvas bag). I’m old enough to remember the 1960s when such a young man would have been dismissed as a hippie.

Looking back, the young man is emblematic of the non-conformist attitude that, I’m pleased to confirm, attracts many men and women to fly angling. I’m not talking about the fashion booms when the sport, for various reasons, becomes the outdoor toast of the day, appealing to those who want to be seen fly fishing rather than actually enjoying it.

Fact is, many of today’s best fly angling scribes were rebels with a cause on the rivers of the counterculture of the 1960s and 70s. Armed with the latest ‘On the Road’ Jack Kerouac novel or ‘Howling’ Allen Ginsberg poetry collection in one hand and a custom-made Winston bamboo rod in the other, they bravely chased their dream and pursued their passion rather than surrender to established definitions of career success. I pray I retain a bit of that rebel streak even though I worked for a regular paycheque for 50 years, with time off for university and graduate school during which I toiled summers on the line in an appliance assembly plant.

‘You’re welcome to join me,’ he added with a welcoming note in his voice.

‘No thanks,’ I answered with a wave before turning towards the car, feeling better than I had in weeks. ‘I have to get going, I just wanted one last look at the river. Tight lines.’