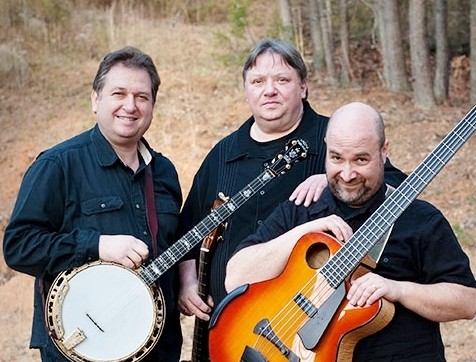 I’m a huge fan of what is commonly known as Americana music. My ears were blown open in 1996 when classical cellist Yo Yo Ma teamed up with bassist Edgar Myer and fiddler Mark O’Connor to release Appalachian Waltz. Four years later the trio released Appalachian Journey.

Because Americana music arises out of the vernacular music of Appalachia, its transatlantic roots extend back to the traditional music of Scotland, Ireland, Wales and England, as well as continental Europe.

I visited the Blue Ridge Mountains for the first time in the fall of 2014 on a trip to Asheville, North Carolina. On a lovely motor tour of Mt. Pisgah I stopped for lunch at the historic Mt. Pisgah Inn.

After dining I perused the gift shop where I spotted Appalachian Concerto, a CD released in 2010 by the Kruger Brothers. Although I was unfamiliar with the trio, I was intrigued by the bluegrass chamber work featuring Jens and Uwe Kruger and Joel Landsberg. I would have purchased the CD based on my love of Americana music, but I was especially eager to listen to the disc because I knew the bluegrass trio was booked to play Kitchener’s Registry Theatre the following spring.

On my way home via the Catskills, Appalachian Concerto was my constant companion in the car CD player. Upon returning to Waterloo I wasted no time learning as much about the Kruger Brothers as I could. As part of my research I received from the musicians three releases — Doc: Remembering Doc Watson (2002), Best of the Kruger Brothers (2012) and Spirit of the Rockies (2013). I highly recommend these albums along with everything else the trio has released.

The Kruger Brothers’ sellout Registry concert in March 2015 was spectacular. Sitting through it, I felt as if I was witnessing bluegrass music as a river with many tributaries: past, present and future. I was transported back to the Blue Ridge Mountains on the wings of invigorating music. Jens’ compositions were exceptional and the musicianship was virtuoso, augmented with strong vocals. In addition to Jens’ original compositions, the trio offered inspired interpretations of the Americana songbook.

Music fans who missed the Kruger Brothers in 2015 had the opportunity to make amends when the trio returned to the Registry a year later to perform. They sold out again when they returned in November 1917.

Happily the trio is returning for a fourth time March 29. Expect their customary sell-out.

For bluegrass fans with their heads buried in sand who would like to know a more about the Kruger Brothers, here’s a thumbnail bio and appreciation.

As suggested above, bluegrass is a vernacular fusion of immigrant music blending traditional ballads and dance tunes from the British Isles and, to a lesser extent continental Europe, with Afro-American spiritual and blues.

Although the Kruger Brothers are based in North Carolina, which plants them firmly in rich American bluegrass soil, their music pedigree is more circuitous. Jens (composer, banjo & harmony vocals) and Uwe (guitar & lead vocals) were born and raised in Switzerland to musical parents of German ancestry. They started playing American bluegrass at a young age, inspired by such legends as Bill Monroe, Doc Watson and Flatt & Scruggs. After busking throughout Europe, the pair of aspiring bluegrass artists launched their professional career in 1979.

In 1995 they teamed up with New York City bred Joel Landsberg (bass & harmony vocals) to form a trio that has been together ever since. They released their debut album in 1997, marking their introduction to American audiences. The trio set up musical workshop in the U.S. in 2002, settling in Wilkesboro, N.C., where they record in their state-of-the-art home studio and conduct a music academy, founded in 2011.

The Kruger Brothers gained a foothold in American bluegrass by mastering the traditional repertoire. Like many of the best bluegrass artists, they expanded their musical palette through innovation and experimentation, encompassing folk, country, blues and rural gospel with classical and jazz. This fusion is sometimes referred to as Newgrass or the aforementioned Americana.

In 2007 the trio teamed up with the Bangor Symphony Orchestra to premiere  Music from the Spring (undoubtedly a riff on Aaron Copeland’s Appalachian Spring). The symphonic work was composed and orchestrated by Jens, with lyrics by Uwe and Landsberg. In 2007 Jens composed Appalachian Concerto, a chamber piece for banjo, guitar, bass and string quartet. The most recent of 14 releases are Lucid Dreams (2015) and Roan Mountain Suite (2017).

The Kruger Brothers maintain a reputation as one of America’s premiere leading-edge bluegrass ensembles. In 2013 Jens — who performed at the age of 19 with the legendary Monroe at the Grand Ole Opry — was awarded the fourth annual Steve Martin Prize for Excellence in Banjo and Bluegrass, a $50,000 award created by the multifaceted performer who picks a pretty mean banjo when he isn’t admiring the paintings of Canada’s legendary artist Lawren Harris.

Since visiting North Carolina I have fallen head over heels for the state’s literature. Music lovers who want to gain a deeper appreciation of bluegrass and mountain music would de well to read the region’s many excellent fiction writers, essayists and poets. At the top of my list are Fred Chappell and Ron Rash, both of whom are novelists, short story writers and poets, followed closely by Charles Frazier, Robert Morgan, Wiley Cash, David Joy, Wayne Caldwell, Howard Owen and Lee Smith. There are others but these are the writers I’ve read and enjoyed.

Chappell expresses most eloquently the connection between landscape and music and the dance that arose out of the music in The Remembering Women, the last chapter in his remarkable novel of interlinked stories Farewell, I’m Bound to Leave You. A fictional ethnomusicologist, who is visiting the region to record its oral culture, music and dance, confides to the narrator, a young girl at the time, and her mother that:

he was involved with a place and a people, with a time and circumstance, that was not only human in all its affections and interests but linked also with nonhuman nature, with sky and stream and mountain, in its reverences. He felt that he was standing near the origins of a strength that helped to animate the world, a power that joined all things together in a pattern that lay just barely beyond the edge of comprehension. He felt that an individual personality would feel itself comfortably and joyfully a part of this pattern simply by giving in to the current of the dance, this small current being but a streamlet of the larger current that poured through the and everything that was in the world and beyond it.

Below is a Youtube version of the beautiful song comprising the title track of the upcoming Kruger Brothers release Forever and a Day. More information at www.krugerbrothers.com

Kruger Brothers in Concert
Registry Theatre
8 pm March 29
Tickets available at 519-578-1570, at the door
or online at www.registrytheatre.com