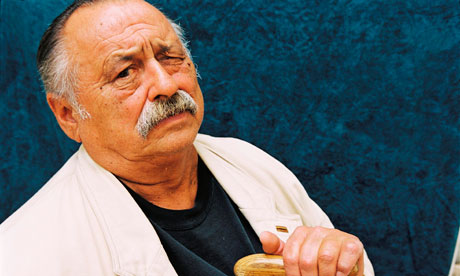 Jim Harrison left this Good Earth on March 26, the day after Good Friday and the day before Easter Sunday. He was 79. How fitting for a man who apprehended the world and all its flora and fauna as sacred. He cast a critical eye on those sad sacks of humanity who exercise dominion over the world and her creatures, water, soil, vegetation and sky.

American letters is diminished with the passing of this visionary writer who, like William Blake and the planet’s myriad indigenous peoples, view the world through the eyes of crow, the heart of wolf and the soul of bear. His writing — poetry, novels, short fiction and essays — will endure. His message is one we ignore at our peril.

Like Ernest Hemingway before him, Harrison learned to fish on the rivers and streams of Michigan’s Upper Peninsula, where he was born December 11, 1937, and where he lived much of his life. He celebrated this Holy Earth by praising sex and reverencing death. A man of big appetite who drank deeply from the Cup of Life, he savoured good food, good wine and good companionship. He grabbed life by the balls with a tenacious grip.

I heard about his passing as I was reading the last book, published while he was still among us. The title story in The Ancient Minstrel tells about an aging writer who bears an uncanny resemblance to Harrison himself. The collection of three novellas constitutes a worthy farewell to a life devoted to making sense of this troubled world through artful writing. It’s eerily prescient that in the last story Harrison kills off Simon Sunderson, a gloriously lascivious, alter-ego who stars in The Great Leader and The Big Seven.

Harrison considered himself a poet, first and foremost, so it’s fitting his last book of poems, Dead Man’s Float, was published earlier this year. It was hailed by the Los Angeles Times as ‘a psalmist look at mortality and wonder,’ an apt description of all his writing.

May he cast a graceful fly on the trout-rich waters of Paradise and regale the angels with the wit, love and wisdom of his eloquent pen.

Following are a few thoughts on a previous book:

Jim Harrison isn’t so much a writer as a force of nature. Think of Pablo Picasso or Henry Miller as creative predecessors.

He celebrated his 77th birthday with the release of his 20th work of fiction, spanning the novel, short story and novella. This output comes on top of 17 poetry and conversation collections, three works of non-fiction (including food writing and memoir) and one children’s story. Harrison is a diverse as he is prolific.

We were introduced to Sunderson in 2011 with The Great Leader. If you suspect Harrison might have slipped in the intervening years, you would be wrong. For my money, The Big Seven, published by Grove Press, is the better novel.

This time out, Sunderson swindles a windfall for himself by blackmailing a woman whose musician son has convinced Sunderson’s daughter to leave university and join him on the road, only to leave her strung out after his lust embraces nubile minors. Thanks to Sunderson’s intervention, the musical Lothario finds himself cooling his balls in a French jail.

Sunderson uses the windfall to buy a cabin on a good trout stream in a remote area of Michigan’s Upper Peninsula so he can satisfy his deep passion for fly fishing. To his chagrin, he soon discovers that his neighbours, the Ameses, are a drunken, violent, incest-happy family that combines the worst of the Hatfields and the McCoys wrapped up in one nasty bundle.

Armed and as dangerous to themselves as to others, the family of feuding reprobates begins to die off systematically from a lethal cocktail of gunfire and poison.

Sunderson gets involved unwittingly after his comely, young cleaning lady and cook, who happens to be an Ames, is murdered. The plot thickens when he befriends Lemuel Ames, a disturbingly intelligent and charismatic ex-con who seeks the ex-detective’s advice on a crime novel he is allegedly writing that bears an uncanny resemblance to the violent mayhem that is exploding all around them.

The Big Seven is a dark, wickedly funny meditation on the nature of evil as elucidated in the biblical Seven Deadly Sins. For his part, Sunderson is obsessed with writing a treatise on what he believes should be the eighth deadly sin — violence

Meanwhile, our modern day, anti-hero haplessly stumbles and bumbles his way through the original seven, especially lust. Although he remains deeply in love with his ex-wife Diane, he cannot resist the delicious allure of an array of delicious women of all ages.

Consequently, don’t be fooled by the effervescent lasciviousness of The Big Seven. Harrison writes with a darkly sparkling wisdom that penetrates the marrow of life.

No contemporary novelist glimpses the mystery and wonder of living on this Holy Earth so effortlessly. He is the reigning William Blake of American letters.